UNFPA’s Goodwill Ambassador, Keiko Kishi, last February presented Japanese media with highlights of three half-hour television documentaries shot during her visit to Senegal from 8 to 17 January to see the population and reproductive health situation there. Ms. Kishi said she chose that country since she spoke French and could converse with village women without interpreters. She described the warm welcome she received and how she joined in the dancing and singing that welcomed her. 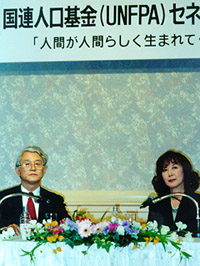 The Ambassador told the Japanese media that she had learnt about the difficulty of enforcing laws banning FGM and, that in some areas, women themselves wanted to maintain the practice. It was evident, she said, that FGM could be eliminated only through a combination of laws and community pressure. During her trip, Ms. Kishi said, she met with Senegal’s Ministers of Planning, of Health and for the Family, as well as with religious leaders. The support of the clergy, she stressed, is necessary to provide reproductive health in Senegalese villages.

More than 50 Japanese media representatives attended the press briefing organized by the Japanese Organization for International Cooperation in Family Planning (JOICFP). They were briefed on the significance of Ms. Kishi’s role in UNFPA by the Fund’s Deputy Executive Director, Hirofumi Ando, who also recalled her work in Viet Nam and the Philippines.

One of the event’s highlights was the presentation of a sample of 60 midwifery kits Ms. Kishi took to Senegal. Noting their low cost and ability to save the lives of mothers and children, the Ambassador said the kits were bought with part of the $30,000 raised by her 100-yen campaign in support of UNFPA. The funds also paid for some materials that will be used to build a maternity ward in a village about 350 kilometres from Dakar.

Later on, the first annual consultation between the Japanese Government and UNFPA was held when Fund officials met with host representatives of the Ministry of Foreign Affairs. The meeting, the result of a year-long effort by both sides, reflected Japan’s importance to population issues and to UNFPA. Seven of the Ministry’s divisions took part in the one-day meeting on such issues as the ICPD+5 process, UNFPA income, population-debt exchanges and UNFPA/Japan funding of projects in Africa and Asia.

"The meeting was an excellent opportunity to discuss many common issues regarding population and development assistance activities from the point of view of strengthening mutual cooperation and partnership arrangements," said Mr. Ando. "UNFPA is proud to have Japan as its number one donor and we look forward to working together with Japan on the ways and means of further implementing the recommendations of the Programme of Action of the International Conference on Population and Development."