Four 'good practice' reports, commissioned by UNFPA, suggest that a holistic approach to changing social norms, involving dialogue among all community members, works best to discourage female genital mutilation or cutting. The following story discusses how the four good practices – community dialogues, use of videos, public declarations and national legislation – can work together to promote the health and rights of adolescent girls.

The Tepeth are mountain people of northeastern Uganda. They reside in conical huts made of sticks, thatch and mud in the semi-arid savannahs and scrubby forests of Moroto district. For generations they have subsisted by herding animals and growing crops. If the harvest is good and food is plentiful, village elders will grant permission for a 'cutting' ceremony, in which girls 11 to 14 years of age undergo a rite of passage to womanhood by having all or a portion of their external genitalia removed with a blunt knife. 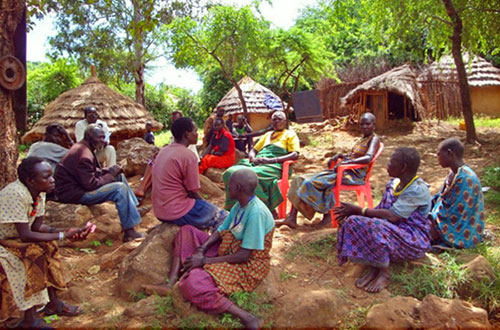 " We decided to abandon [FGM/C ] here in the valley." – Tepeth elder (woman, centre, in the yellow shirt)

Female genital mutilation/cutting is now illegal in Uganda and has been publically condemned. Yet it persists among an estimated 1 per cent of the population – mostly the polygamous Tepeth, Sebei and Pokot ethnic groups living in districts bordering Kenya. A multi-pronged effort by the UNFPA-UNICEF Joint Programme on FGM/C is showing that laws are only one step in rolling back deeply rooted traditions held firmly in place by vested interests and shrouded in secrecy.

Progress is taking place, however, when the force of the law is empowered by the will of the people. That means letting villagers themselves, including the girls who have the most at stake, decide what is best for them, based on sound information. Making it a collective decision is important, since those who deviate from social norms are often ostracized in tightly knit traditional communities. Tapping the influence of village elders – the gatekeepers and custodians of local culture – is key in this regard.

Once the girls have been cut they retreat even further into remote mountainous areas for up to three months to recover. The parents are asked to bring them food, but no one other than the cutter herself is allowed to see them. Additional ceremonies over this period prepare the girls for marriage and childbearing. The end of the healing period is marked by yet another ceremony, after which the girls are reunited with their families.

At this time the girls are officially available for marriage offers, which are expected to be accompanied by a 'bride price' – essentially a dowry given to the bride's family, usually in the form of many head of cattle. Typically, it is the older men in the village who can afford a bride price, which increases if the girls are cut.

When the social dynamics of FGM/C and other harmful practices such as bride price and child marriage are considered, it is not surprising that they persist. The bride price tends to give older men – who wield social, economic or political power – exclusive access to new young wives. The act of performing female mutilation/cutting provides income and prestige to the cutters themselves, who receive large payments from parents and tokens of appreciation throughout the year. Parents receive gifts in exchange for their daughter's hand in marriage. And village elders, who confer their blessings on the ceremony, preserve their power and the status quo.

Seemingly, the only ones to suffer are the girls themselves. Yet until recently, the considerable risks accompanying FGM/C remained a carefully guarded secret among elders. These were the findings of a survey undertaken by Arbeiter-Samariter-Bund (ASB), a non-governmental organization that is implementing a project funded by the joint programme to encourage the abandonment of FGM/C through community dialogues.

Opening the practice to public scrutiny 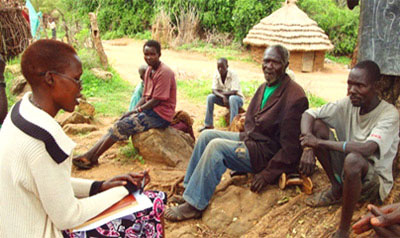 Dialogue sessions are conducted separately with youth and elders, who are asked to explore the practice and its consequences, according to Lorika Claudias Nanta, an ASB officer in Moroto. At the end of the sessions a facilitator explains a 2010 law, the Prohibition of Female Genital Mutilation Act, which makes FGM/C a crime, punishable by up to ten years in prison – or for life, if the victim dies, is disabled, contracts HIV as a result of being cut, of if the cutter is a medical worker or someone in a position of authority or control over the victim. Elders and young people are then brought together for further conversations about the issues raised.

Before the project began, youth within the Tepeth communities were largely unaware of the problems related to FGM/C, according to one community leader. It was not widely understood, for example, that in addition to excruciating pain, cutting can cause girls to bleed to death or to contract HIV or other infections, since the same unsterilized knife is used for all the girls being cut. Other risks include pain or loss of feeling during intercourse, infertility and complications during childbirth. In some cases, parents did not know for months, until final ceremonies concluded, that their daughters had died or were permanently disabled as a result of the procedure. FGM/C also contributes to illiteracy, since girls typically marry and drop out of school soon after being cut.

Success of the dialogues depends upon creating an environment that encourages participation, especially by local leaders, according to Ms. Nanta. This allows the community the chance not only to discuss concrete issues, but also to devise their own solutions. "The community 'owns' the process and outcomes, including action points," she says. "since nothing is imposed on them."

Once the community understands the consequences of the practice, the majority of people tend to support its abandonment. However, many are reluctant to come out openly with their views for fear of being shunned, stigmatized or punished for their beliefs. That's why involving leaders who are confident enough to speak out is crucial.

The project is getting results. In 2012, ASB-facilitated dialogues reached nearly 1,500 people. Today, the subject of FGM/C is no longer regarded as taboo, but is being openly discussed without the risk or fear of censorship. Many communities have publicly declared commitments that are now being carried out: The Tepeth in Moroto, for instance, have demanded that the police in their sub-county do a better job of enforcing the anti-FGM/C law. Communities are also able to report cases of FGM/C or even threats to perform the practice, which was not the case in 2011, when the dialogues started. Moreover, the dialogue sessions have become avenues in which elders are sharing information about the practice with youth: As a result, informed decisions have been made in many cases to forego cutting (for other results, see sidebar).

Children as agents of change 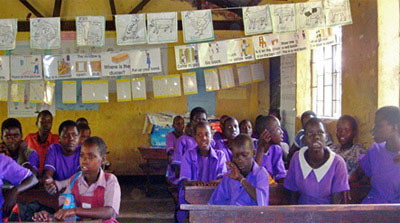 Working with children in and out of school – not only as potential FGM/C candidates but as agents of change – is also yielding results. By mid-2012, a video documenting the dangers of the practice had been screened 20 times in primary schools and informal learning centres, reaching 1,000 children in Moroto district.

Pupils report that, before watching the video, their views on FGM/C were shaped entirely by the exciting stories told to them by their peers and elders – about the celebrations, being showered with gifts for being brave, their increased status after being cut, their initiation into adulthood, and the gifts they would receive at marriage, especially if one was found to be a virgin at the time of cutting.

After seeing the documentary, the children were able to articulate the negative aspects of the practice, which they relayed to their parents and peers. The sessions gave the girls confidence to speak out. Some of the boys reported that they would now feel comfortable marrying an uncut girl, especially since it would be easier for them to give birth.

The video, which was produced in Kenya and translated into the local language, was also shown to some of the elders in the Tepeth community. According to David Korryang, who works with MAZIDEP, a faith-based organization implementing the video project for the joint programme: "The elders, especially the men, were shocked since they had no precise knowledge of what FGM/C implied as they kept away from witnessing the cutting process/ceremony of the girls." 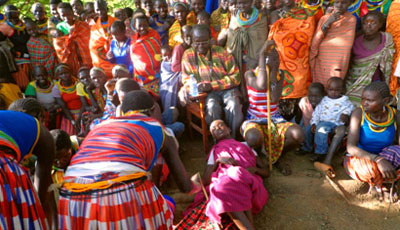 In Amudat district, another effort of the joint programme is targeting village elders (both male and female) through mass sensitization and community dialogues. As a result, at least 26 villages, with a total population of more than 100,000 people, have publicly declared their commitment to end FGM/C. Among those participating in the declarations were 49 religious leaders, 10 community groups consisting of women, men and elders, and 21 resident cutters. When asked about the changes since the declarations, elders cite reduced dropout rates among girls and the fact that many communities are changing their views on this age-old practice.

Solutions from deep inside a community

While UNFPA and UNICEF were strong backers of the law prohibiting FGM/C, they also understood that the legal ban would have to be accompanied by a grassroots approach to change people's minds through education. And indeed, after the law went into effect, the practice went underground. Instead of openly celebrating FGM/C, communities began to carry it out in secret, in hard-to-reach locations or across the border in Kenya. But things are changing in that country, too.

Following passage of the ban on FGM/C in Uganda, Kenya passed a similar law, and police forces in both countries are now working to discourage the practice in border communities. Opponents of the practice in Uganda are advocating for the creation of boarding schools and safe spaces for girls who escape early marriage and FGM/C and cannot return to their communities – an approach being used successfully in Kenya.

In the meantime, a simplified version of the 2010 law, written in local languages, is being circulated in high-risk areas of Uganda. And community themselves are thinking about alternative rites of passage for girls as well as alternative livelihoods for cutters. A ripple effect is under way that will hopefully broaden out to the society as a whole.

"When the attitudes of some members of the society have changed, then the complacency has been disturbed for almost everyone in that society," according to POZIDEP, the faith-based organization promoting public declarations to discourage the practice. "FGM/C abandonment needs to be a collective effort; all actors need to come together and deliver that message from deep inside the community."

As a result of community dialogues facilitated by ASB: