Towards Ending Sexual Violence in the Democratic Republic of the Congo

KINSHASA, Democratic Republic of Congo — UNFPA Executive Director Dr. Babatunde Osotimehin, together with the Special Representative of the Secretary-General on Sexual Violence in Conflict, Zainab Hawa Bangura, are on a joint visit to the Democratic Republic of the Congo (DRC) to deepen political commitment in the fight against sexual violence in the country.

Dr. Osotimehin was also joined by Tewodros Melesse, Director-General of the International Planned Parenthood Federation (IPPF), to fulfill commitments by UNFPA and IPPF to support the DRC in expanding family planning programmes and reducing maternal death, in the context of a recent initiative to boost family planning services for youth and vulnerable groups.

Sexual violence is not inevitable

Ms. Bangura and Dr. Osotimehin participated in the launch of a report on the scale of sexual violence in the DRC between 2011 and 2012, prepared by the Ministry of Gender with support from UNFPA.

According to the report, in 2012 alone there were 15,654 reported cases of sexual violence – a 52 per cent increase from 2011. Of these, 98 per cent were perpetrated against females. 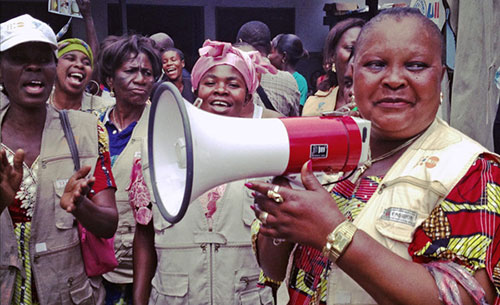 During a visit to the Marechal Health Centre in the Micondo district of the DRC's capital Kinshasa, Ms. Bangura and Dr. Osotimehin were greeted by mobile teams who work to raise awareness about family planning.

In conflict-affected areas of the country, the picture is bleaker. The average age of survivors of sexual violence is 21 or younger, and a third of all survivors are aged between 12 and 17. In 2012, 82 per cent of all survivors had not completed primary school.

“Sexual violence is not inevitable,” said Dr. Osotimehin. “Its economic and human costs on communities and countries are tremendous and we must commit ourselves to work together towards the elimination of sexual violence in DRC.”

“One of the things we have to understand is that gender-based violence is about the status of women in our society. We can only raise their status if we address the issue of girls staying in school so that they can determine what their lives are going to be,” he said.

“The DRC has made great strides in developing the framework necessary to combat sexual violence in conflict,” said Ms. Bangura, “and we are here to deepen our engagement and ensure that the UN is providing coordinated, targeted and survivor-centred support to best meet the challenges on the ground.”

The report on the scale of sexual violence in the DRC from 2011 to 2012 - and the actions taken to address it - is available here (in French).

With approximately two women dying every hour from pregnancy and childbirth, the DRC has one the highest maternal death rates in the world.

UNFPA, together with IPPF, are supporting the country in implementing an effective strategy to develop adequate family planning services and to sensitize the government and communities.

The collaboration between IPPF and UNFPA builds on the institutions’ long-standing history of co-operation on sexual and reproductive health. With the launch in May 2013 of an initiative to boost family planning services for youth, vulnerable groups, and countries in transition, the partnership will contribute to filling gaps in healthcare infrastructure, boosting the quality of the health workforce, developing efficient family planning distribution systems and ensuring affordable family planning supplies.

In this context, Dr. Osotimehin and Mr. Melesse met with members of a family planning advocacy coalition – including members of parliament, women’s associations, youth leaders, media professionals, religious, leaders, and development partners – to evaluate progress made regarding access to information and voluntary family planning services in the DRC, and government contributions to these goals.