HABA TSEKA, Lesotho – “Before, I never used a condom, and I would force myself violently onto girls and young women,” said Kabelo*, 22, in rural Lesotho. A herder in Haba Tseka, he grew up in an area where violence is considered a normal, masculine trait.

Thapeli*, 21, grew up with similar views. He never attended school, and instead spent his time herding sheep, goats and cattle in the mountains.

He also says he used to abuse girls, intercepting them on their way home from school, even forcing them to have sex.

“I felt strong in those moments because I had learned that this is how women should be treated,” he said. 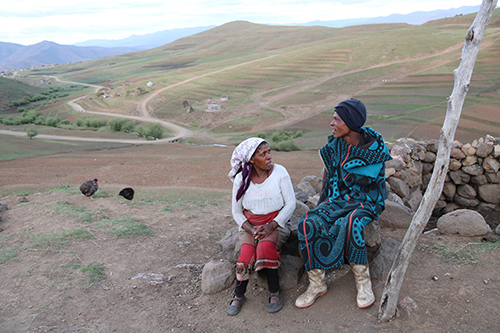 A young herder with his mother. In evaluations, community and family members say they have seen changes in the attitudes and behaviours of information session participants. © UNFPA Lesotho

But both men say they have changed.

They participated in UNFPA-supported information sessions, which introduced them to ideas about human rights – including women’s and girls’ right to live free of abuse and violence.

They learned about the importance of respect and communication.

Today, they say they want other men and boys to know these things, too.

In the highlands of Lesotho, young herders – commonly called ‘herd boys’ – learn to fight each other over territory. There is a common saying: “Fighting is the only solution to conflict.”

“Fighting became a means of communication and [a] demonstration of power,” said Sello Matsoso, an officer at Help Lesotho, the UNFPA partner conducting the information sessions.

Violence against women and girls is often normalized. According to a 2014 national survey, 33 per cent of women and 40 per cent of men in Lesotho believe wife beating can be justified.

To make matters more challenging, discussing sexuality or sex is considered taboo, even among friends or with partners. As a result, many young people do not know how to address issues of consent.

Many young people also lack information about how to prevent HIV, which is dangerously widespread. Lesotho has an adult HIV prevalence rate of 25 per cent, one of the highest in the world.

“Even if I had heard of HIV transmission, I didn't know that it could happen through sexual relations,” Kabelo told UNFPA. 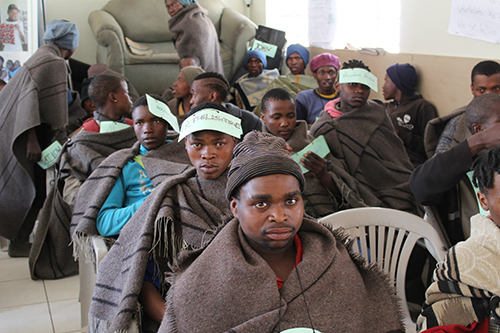 In Lesotho, UNFPA supports the Lapeng Centre, which provides support to survivors of gender-based violence and helps them pursue justice. UNFPA also works with police and other law enforcement personnel to strengthen their response to violence.

But with studies showing that herd boys are frequently among the perpetrators of gender-based violence, it was clear that efforts must also be directed towards them.

In 2014, UNFPA and Help Lesotho began offering the information sessions, targeting herd boys as well as other at-risk groups, such as out-of-school youth and adolescent mothers.

The programme involves an intensive five-day training, and then monthly meetings for six to eight months.

It covers interpersonal skills, goal setting, anger management, and how to communicate and negotiate respectfully with others. It also provides comprehensive sexuality education, including how to access health services and prevent HIV transmission.

These lessons have been eye-opening to many participants.

“I now know violence is wrong. Communicating and agreeing is my new approach to the opposite sex,” said Thapeli.

Over 600 herder boys and young men have been reached thus far.

In evaluations, chiefs, parents and other community members say that the young men’s behaviour and attitudes have indeed changed.

“Now I communicate respectfully with my partner to negotiate the use of a condom,” Kabelo said. “I always use a condom now.”

Thapeli says he wants to share what he has learned with family and friends.

“I have learned to stop the violence. I want to teach and inspire others to do the same,” he told UNFPA.

“I feel like a real man now, with respect for girls and women,” said Thapeli. 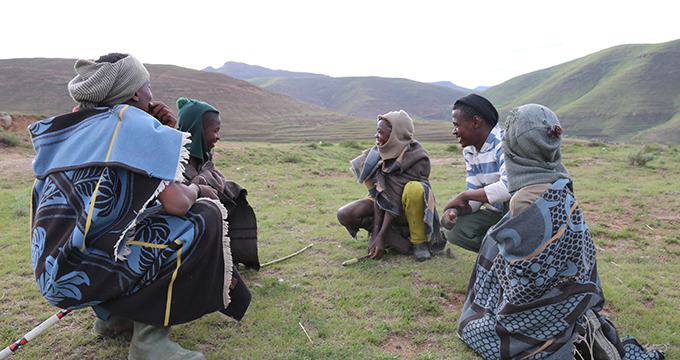 Survivors of sexual violence need healing and justice even amid pandemic,…