DAMASCUS, Syria – This week, Syria marks a grim anniversary: 10 years since the start of the country’s grinding conflict. Today, one decade into the catastrophe, about half the country’s entire population has been uprooted, with some 12 million people in internal displacement or living as refugees. Atop the persistent insecurity, Syrians are also enduring the COVID-19 pandemic and worsening economic conditions – all of which are taking a disproportionate toll on women and girls across the region.

“For many girls and young women like me, this is all that we have known,” Samia* told UNFPA a year and half ago. She was 17 at the time, and had lived for several years as a refugee after fleeing violence in her hometown of Qamishli. Since then, she has survived child marriage, attempted sexual assault and repeated family violence, including at the hands of her own brother.

This kind of violence and trauma is all too common among the women and girls of Syria, both those still living in their home country and those exiled to refugee camps and communities.

“The violence happens everywhere and it definitely became worse,” explained Lamia*, an adolescent girl from Eastern Ghouta. UNFPA’s programme data show that the risk of gender-based violence has increased significantly over recent years, a trend corroborated by reports from other humanitarian actors. Many say they fear that this violence has become normalized.

A new reality for women and girls

In the last decade, insecurity, fear and intense economic pressures have sharply increased the vulnerability of women and girls, and rates of practices such as child marriage have spiked.

Sixteen-year-old Mariam*, from Aleppo, told UNFPA that, for girls her age, “life quickly became an open-air prison after the war. Suddenly, we were told not to leave our houses because we might get harassed, raped or kidnapped. I'm told that being married is my only path to true safety, but I don't want to get married. I'm simply not ready.”

Access to school and health care – once taken for granted – are no longer assured. Among those in need of assistance across the region, close to half a million are pregnant, requiring access to quality sexual and reproductive health care.

The COVID-19 pandemic has only compounded these challenges, with movement restrictions keeping some women at home with abusers, and rising economic stress increasing tensions in the home.

A new generation looks to the future

UNFPA and partners remain committed to providing life-saving services to women and girls in Syria and in camps and host communities throughout the region. In 2020 alone, UNFPA delivered sexual and reproductive health services to nearly 2 million people, while almost 1.2 million were reached through programmes to prevent and respond to gender-based violence.

Throughout the region, UNFPA supports 112 women’s and girls’ safe spaces,  17 youth centres, 33 emergency obstetric care facilities,  133 primary healthcare centres, and 125 mobile clinics. Over the past five years, UNFPA has been able to scale up its services, doubling the numbers of people reached.

But these continuing efforts require support from the international community. UNFPA is enhancing its regional response throughout 2021 to address challenges including the worsening economic situation and pandemic, for example by piloting cash and voucher assistance programmes. UNFPA will also continue tailoring programmes to make them more accessible to a wider range of groups, including adolescent girls, people with disabilities and the LGBTQI community.

And amid the ongoing crisis, the people of Syria have not given up hope. Young people at UNFPA’s centres and programmes demonstrate remarkable resilience, with many rising above their challenges to become artists, activists, innovators and other influential voices in their communities.

“Like all girls in Syria, I live a difficult childhood,” said Bana, 12, in northwest Syria. But she, like so many young Syrians, dares to dream of a better future: “I like to learn to make my future bright,” she said. “I hope that this war will end soon so I can return safely with my family to our home... I am sure this is the dream of every girl here.”

*Name and locations changed for protection 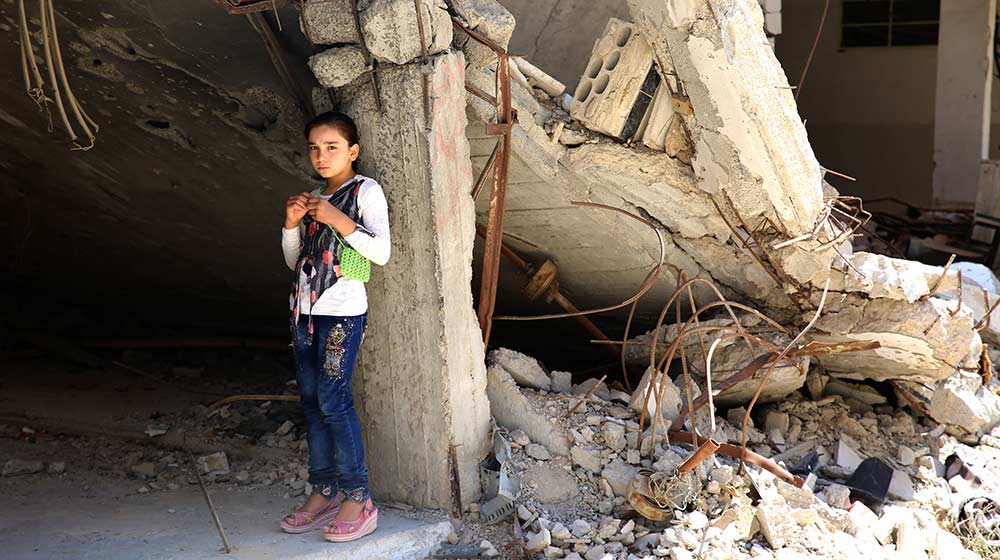