As Syrian crisis drags into fifth year, pregnant women caught in the middle

DAMASCUS, Syria – Sarab’s life changed forever in January, when her husband was killed in a mortar explosion at the schoolyard where he worked. She found herself alone and pregnant at age 23.

As the crisis in Syria enters its fifth year, the conflict is worsening, UN officials said, ahead of today’s pledging conference in Kuwait. Relentless violence and destruction have forced nearly half of all Syrians to flee their homes  – making this the largest displacement crisis in the world.

And for pregnant women in Syria, like Sarab,* the risks and needs are even greater. 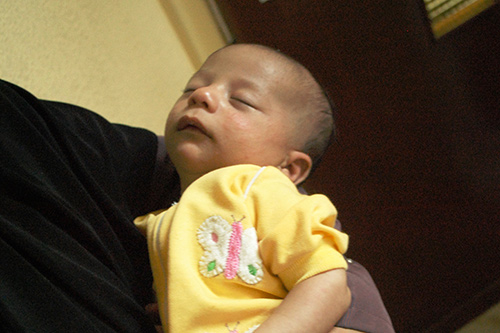 An infant in Syria, where the needs are growing. A pledging conference starts today in Kuwait to address the humanitarian response. © UNFPA Syria

But the crisis has caused critical disruptions in services, including maternal health care. UNFPA estimates that nearly half a million Syrian women, including refugees and those still in Syria, are pregnant. Over 70,000 of them will likely experience complications related to pregnancy or delivery.

Infrastructure damage and continuing hostilities have reduced the number of facilities and health personnel able to provide pregnant women with antenatal and post-natal care and skilled attendance at delivery.

Lack of access to safe transportation has exacerbated these problems. And with families uprooted and livelihoods interrupted, the costs of care are increasingly difficult to bear.

UNFPA has set up a reproductive health voucher system to pay for these essential services, including prenatal, delivery, post-natal and emergency obstetric care.

In the last weeks of her pregnancy, Sarab was consumed with grief and fear. Displaced, and now alone, she did not know whether she could cover the costs of delivery. 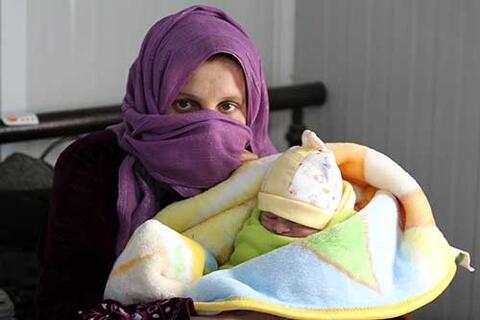 Nearly 4 million Syrians are now living as refugees in nearby countries. UNFPA is supporting reproductive health care for refugees. Um Mohammad with her newborn son at a clinic in the sprawling Zaatari camp in Jordan. Click to view slideshow. © UNFPA Jordan/ Ra’d Addayleh

“I was so worried about how I would manage giving birth on my own,” she said.

The health workers gave Sarab a voucher, ensuring she would be able to receive the maternal care and other services needed to safely deliver her baby.

Reproductive health vouchers were distributed by local NGOs and 28 mobile teams, including in hot spot areas and settlements for displaced populations.

These efforts are making a difference for women like Sarab, who recently, and safely, gave birth to a healthy girl.

Her daughter’s birth has been an opportunity for a new beginning, she said. “I have my beautiful baby girl to give me new hope.”