Survivors of gender-based violence get a fresh start in Morocco

FEZ, Morocco – “I was forced to leave home with my baby in my hands," Khadija, 42, told UNFPA. When she finally decided to divorce her husband after over 10 years of suffering abuse, she thought her agony would end.

Divorce ended her physical torture, but her husband's refusal to pay alimony for her and the child meant Khadija would have to struggle to maintain them both. Although her family supported her, gave her a roof to sleep under and enough food for the infant, Khadija buckled under the psychological pressure of financial dependency.

With no education or employment, she soon found out how hard it would be to live without an income.

Khadija’s situation is not uncommon in Morocco. Although the country has made significant progress on advancing gender equality in elementary school, national data show that rural girls' high-school enrollment rates barely topped 30 per cent as of 2014.

She decided it was time for her to earn her own income, and had spent two years doing laborious farm work when she heard on the radio about the nearby UNFPA-supported Al-Bathaa Centre for survivors of gender-based violence.

There, Khadija embarked on a fresh start thanks to services such as counselling and vocational training. The centre also gave her the opportunity to explore her talents in business, and helped her launch her own project.

The relationships with both other survivors and counsellors that Khadija forged during her stay at the centre push her to visit frequently. Now she eyes the future with confidence and joy, she says, and dreams about opening her own shop soon.

Escaping the vicious cycle of abuse

Ghaliya, 44, is another survivor who endured almost a decade of domestic violence before escaping.

She knew she would face poverty and the burden of caring for six children, and she was convinced no one would protect them. Earlier attempts to escape had ended with her and her children sleeping on the streets, then returning home in desperation.

In the end, Ghaliya left her husband without seeking help from the police or the justice system.

“While I finally managed to expose what I had been through, fear controls many other women who prefer silence because they are convinced that if they speak out, they will not have protection," she said.

Ghaliya 's ordeal happened before Morocco passed, in February 2018, a new law to protect women from abuse. The new legislation stipulates tougher penalties for perpetrators of gender-based violence, including rape, sexual harassment and domestic abuse. Those found guilty face prison terms ranging from one month to five years, and fines from $200 to $1,000.

In the meantime, survivors of gender-based violence can still receive essential services at the Al-Bathaa Centre, where Ghaliya says she became empowered to regain control over her life.

“Listening to stories of other survivors of violence enabled me to open my eyes to the necessity of working on confronting this violence,” she said.

Ghaliya  joined a support group that provides assistance and care for survivors of gender-based violence, and encourages them to become agents of change.

Today, Ghaliya says she insists on demanding her rights – and defending them.

“I dream about a day when all women who survived violence will regain their dignity, live in safety, and become liberated from fear and want.” 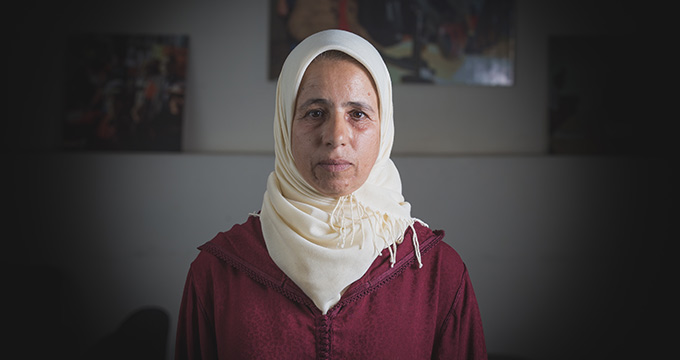 Survivors of gender-based violence get a fresh start in Morocco