YOLA, Nigeria – After being captured from their homes, violently abused and, in many cases, starved almost to death, survivors of the Boko Haram insurgency have begun the long process of healing.

In recent months, the Nigerian military has rescued hundreds of women and children from Sambisa Forest in Borno State, a former stronghold of the militant group. Many had been held between five and 11 months.

On 3 May, some 275 survivors of kidnapping were transferred to the Malkohi displacement camp in Yola, Adamawa State. The United Nations Population Fund, with support from the Government of Japan, has been providing psychosocial support and sexual and reproductive health care to those affected by the insurgency.

“I remember hearing gunshots and feeling afraid. I ran to save my life and that of my six children, but I was not fast enough,” Zainab* told UNFPA.

She was in the second trimester of pregnancy when she was abducted. 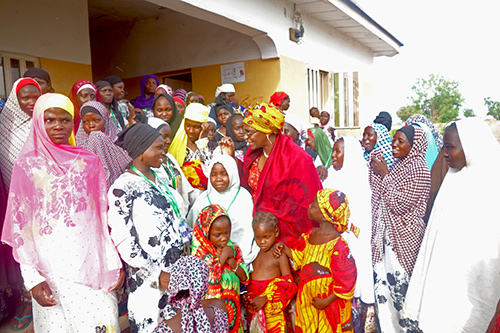 Survivors of the Boko Haram insurgency Malkohi Camp. They are with UNFPA Representative in Nigeria Ratidzai Ndhlovu.

“We are looking for your men. Do not run,” Zainab remembers the gunmen saying when they stormed her village. Even so, they began capturing women and children as well.

She and the others were taken to Sambisa Forest. They were mistreated, and Zainab received very little to eat.

“I lost my baby,” she said, wiping away tears with the back of her palm, “but I had to remain strong for the others.”

Now at the Malkohi Camp, she is receiving psychosocial support.

“Many of the women undergoing counselling have suffered some excruciating loss,” said Chris Sebum, a psychosocial specialist with UNFPA. The care they receive aims to promote their sense of safety, and also to restore hope and encourage recovery, Mr. Sebum said.

Fatima’s* losses were also unbearable. She watched Boko Haram militants murder her husband and drag her three children away. Afterward, she was taken to the Sambisa Forest.

Like Zainab, Fatima was pregnant. She ended up giving birth in the forest.

She and her newborn were later rescued. Still, she struggles every day, not knowing the fate of her three other children. She believes they were taken to a different camp, and fears they may have been slaughtered like her husband.

Nearly 1.5 million people have been displaced from their homes in north-eastern Nigeria due to the crisis. Thousands more are refugees in neighbouring countries. And despite major gains by the Nigerian military, attacks by Boko Haram continue.

UNFPA is working to support the needs of those affected by the violence, including both survivors of abduction and the wider community.

Dignity kits have been distributed to women and girls of childbearing age. These kits contain sanitary napkins, soap and other essential hygiene items. Reproductive health kits have also been provided to health workers in the affected areas, helping to support antenatal care and safe delivery for pregnant women.

And special care is provided to survivors of abduction. “The social, emotional and intellectual needs are addressed by a combination of psychosocial support activities, such as group and individual counselling, psycho-education, psychiatric referral and the provision of culturally appropriate dresses to all the women and girls to replace the torn and shabby dresses they wore for months throughout their captivity,” said Ratidzai Ndhlovu, UNFPA’s Representative in Nigeria. 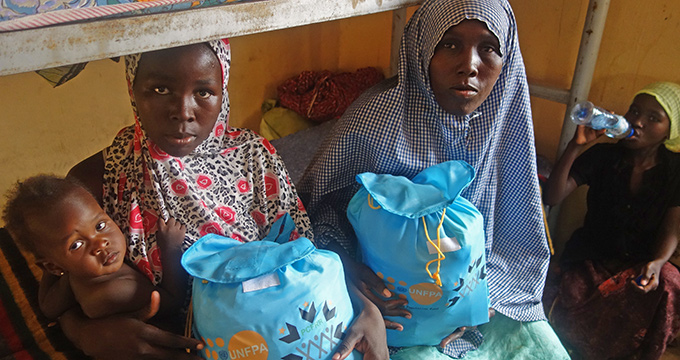