TEMBISA, South Africa – Buyisiwe, 29, slumps on a green couch in her father’s sitting room in a run-down neighbourhood in Tembisa, a sprawling township north of Johannesburg. Her eyes stare blankly at a wall. Her face is fixed between a sigh and a smile; her occasional laughter sounds incongruous with the pain that seems to well up inside her. She speaks through gritted teeth, slowly and in a controlled tone. Her hands, firmly secured between her thighs, suggest nervousness and a reluctance to open up to a stranger about a painful personal experience that one would rather forget. Although it happened over two years ago, memories of being gang-raped by eight adolescents remain fresh in her mind. 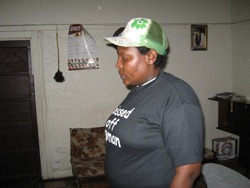 Buyisiwe regularly lapses into depression as a result of the rape. Photo: George Ngwa

It was 5 am on 2 October 2005, when I was woken up by a loud bang on my bedroom door. I got up to face a group of young men, some of whom I knew in the neighbourhood. They asked me for my phone and money. As soon as I handed these to them, they dragged me out of the house and started raping me one after the other. I tried to make a dash for safety, but was caught by a second group. They dragged me towards the train station and raped me repeatedly. In all, eight out of the group of 15 raped me. Some of them were minors.

Buyisiwe’s horrific experience is all too common in South Africa. Pages of local newspapers are filled daily with a steady deluge of reports of rape from across the country. According to official statistics, one out of four South African women has been or will be raped. Nearly 23,000 cases were reported in the first six months of 2007.

But these figures may not reflect the full magnitude of the problem. Women tend to report being raped only when they believe their case will be thoroughly investigated and prosecuted with sensitivity. According to Carrie Shelber of POWA (People Opposing Women Abuse), a South African-based organization dealing with women’s abuse, this wariness results in only one out of nine rapes being reported

Recent apparent declines in rapes (reported cases fell by 2.6 per cent in the first half of 2007) might actually reflect fewer cases being reported due to either diminished confidence in the police or unfriendly handling of victims by police officers.

Moreover, only a fraction of reported sexual offences get successfully prosecuted. “Often, the reason some people don't report is that they fear nothing would be done, or that they wouldn't be believed, or that it is too personal a crime," says Ms. Pumeza Mafani, project manager of the Sexual Offences and Community Affairs (SOCA) Unit, National Prosecuting Authority (NPA). Others dread the lack of confidentiality in the medical system and the inadequate legal process, including rudeness and poor treatment from unsympathetic law enforcers.

Buyisiwe understands this all too well. The complaint she lodged against those who raped her has gone nowhere in the courts in the past two years. “When I reported the rape to the police, they didn’t consider it an emergency. At the police station, the officer who was taking my statement was busy chatting with a colleague. It took them three hours to get me to the hospital for collection of forensic evidence and treatment [post-exposure prophylaxis against HIV infection]. The delay in taking me to the hospital was killing me because I was afraid I’d catch HIV,” she says.

Early medical examination and treatment for rape victims are especially important in the context of HIV prevention. Forced sex may directly increase the risk of HIV transmission to women through physical trauma. According to Ms. Shelber, the violent nature of rape places the woman at greater risk of genital injury and bleeding, increasing the risk of HIV transmission.

When Buyisiwe’s case finally got to court, it met with postponement after postponement – some lasting three months. When the case was finally called, Buyisiwe’s docket was empty – her statement to the police and corroborative forensic evidence were missing from the file. The judge threw the case out and released all the accused.

Although the case is now back in court, thanks to the legal assistance of POWA, Buyisiwe has had to contend with a daily stream of taunts and threats from some of the alleged perpetrators and their family members. “The boys call me a prostitute and promise to rape me again. They have threatened to kill my brother if I continue with the case. They took my soul. I am scared and stay home most of the time. I hope someone can hear me and help me,” she pleads.

Buyisiwe’s case offers a glimpse into the paradox of South Africa’s judicial system. In the arenas of domestic and sexual violence, the promise of good legislation is often not borne out in practice. Weaknesses in the criminal justice system, especially in connection with the reporting and management of rape and other forms of gender-based violence, often account for the gross under-reporting of such cases, as well as the gap between reported incidents and recorded cases.

Sexual assault can profoundly affect the physical, emotional, social and mental well-being of its survivors. “As a society, we fail to understand that rape is connected to the broader issues of human sexuality and human dignity. Rape is violent, sometimes causing visible damage, but always inflicting long-term internal bleeding of the emotional sort,” says Ms. Pumeza Mafani of the NPA. 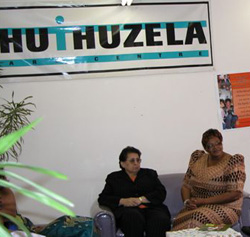 UNFPA Executive Director Thoraya A. Obaid has asked administrators of the Thuthuzela Care Centre to share their knowledge with counterparts in other countries. Photo: George Ngwa

In an attempt to address this personal injury and the basic procedural issues (such as case processing and police investigation), and to combat child and gender-based violence, the South African government, with support from UNFPA, the United Nations Population Fund, created Thuthuzela Care Centres (TCC). Thuthuzela means ‘comfort’ in Xhosa, one of the 11 official languages of South Africa.

“Thuthuzela is a haven for rape survivors, where they can expect the necessary support and treatment in a single locale. It aims to reduce secondary trauma for the victim, improve perpetrator conviction rates and reduce the time in finalizing cases,” says Ms. Mafani.

The TCC initiative is a response to the largely fragmented and inconsistent nature of the traditional division of tasks amongt those involved in the management of rape cases. TCC takes a client-centred approach in which reporting and management of rape cases is transferred from police stations to a victim-friendly centre within a hospital. This enables the victim to access assistance from the medical staff, investigating officers, prosecutors, counsellors and emergency support services on a 24-hour basis. The centres offer comfort, counselling, care and treatment.

Each centre is staffed by a site coordinator, case manager, healthcare professionals and trauma counsellors working closely with the police and prosecutors. This allows rape survivors to receive medical treatment and counselling at the same place where they can report the offence to the police. Staff are specifically trained to handle the youngest clients in a friendly and sensitive manner. The aim is to transform victims into survivors at the end of the process, by reducing secondary trauma (from the way in which they are treated), minimizing the amount of time it takes to finalize a case, improving the conviction rate and providing holistic assistance.

Since the opening of the first TCC at the GF Jooste Hospital in Manenburg, Cape Town in 2000, the government -- with the assistance of foreign donors, the private sector and national non-governmental organizations -- has created ten care centres in six provinces. The plan is to increase the number to 80 by 2010, with at least two in each province. The location of each care centre is determined based on the local incidence of rape.

Although the TCC approach faces some challenges, including unclear reporting lines among partners in the project, inadequate consultation with stakeholders and coordination of services, the Thuthuzela model has already improved the process of reporting and prosecuting rape and other sexual offences. The entire process takes place in a dignified, supportive and friendly environment.

The centres actively advertise available services in their communities through banners, billboards and rape-awareness activities. As a result, many women who were raped as children and are now in their twenties have availed themselves of the absence of statutes of limitation on this crime to seek the assistance of the centres. The overall annual number of rape victims attended to by all the centres stands at over 10,000. The GF Jooste Centre, for example, receives between 100 and 120 cases every month. One-third of the victims are children under 13 years. The youngest victim was an 8-month-old baby.

Working in tandem with dedicated sexual offences courts, TTCs have made marked progress in achieving one of the key objectives of the NPA, which is improving the conviction of rapists. A 95 per cent conviction rate has been achieved on all prosecuted cases emanating from the centre at GF Jooste Hospital in Cape Town, according to Ms. Mafani.

“At the heart of the success of the Thuthuzela approach,” says Advocate Majokweni, head of the Sexual Offences and Community Affairs (SOCA) Unit, “is the professional medical and legal interface and the high degree of cooperation between victim and service providers, from reporting through investigation and prosecution of the crime, leading up to the conviction of the offender.”

The Thuthuzela rape care centres have been so successful that the government of Chile has decided to emulate the initiative. During a visit to the GF Jooste Centre, Ms. Thoraya Obaid, Executive Director of UNFPA, was so impressed by the performance of the Centre that she asked the authorities to share their knowledge with counterparts in countries that are grappling with huge problems of rape and gender-based violence, such as the Democratic Republic of Congo.

The Thuthuzela rape care initiative is a giant step in the slow and painful process of healing communities and offering the medical, social, psychological, legal and emotional support that survivors need to heal.