LOUVA, Angola – Since the outbreak of violence in the Democratic Republic of the Congo’s Kasai region earlier this year, nearly 35,000 refugees have poured into Angola’s Lunda Norte Province.

The population is highly vulnerable. Some 75 per cent of refugees from Kasai are women and children, according to UN reports. Many refugees have reported witnessing mass killings, rape and other human rights abuses during their flight from conflict.

Ester, 25, recounted the frenzy of her departure. “It was the day when the war arrived to our village. They were killing people. I was not able to take anything with me, only my children,” she said. 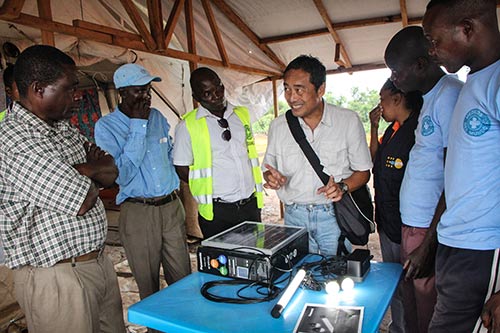 Humanitarian groups are working to relocate many of the refugees from the Cacanda reception centre to a new settlement in Lóvua.

The new location allows the refugees to have some privacy and space for farming, but it is not connected to an electrical grid, so the refugees are left in total darkness when the sun sets – a problem for their safety and security.

Ester’s family recently moved into the settlement. “We are living in the bush. I do not have any lamps, and no light. It makes me feel afraid,” she said. “There is, for example, no light for us to be able to go to the toilet during night.”

Around the world, women and girls report being threatened or assaulted when leaving home at night to relieve themselves or manage their menstrual hygiene. These risks are elevated in crisis settings, when social safety nets, law enforcement and other protection mechanisms break down.

Darkness poses other risks as well. Women who go into labour at night, for example, may have trouble getting to clinics or being properly treated without a reliable light source. 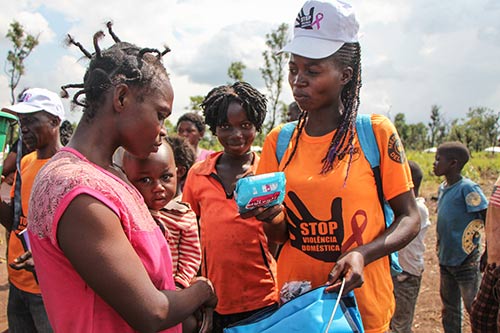 “Light is important to help maintain the safety and rights of women and adolescents at night,” said Florbela Fernandes, UNFPA’s representative in Angola.

UNFPA is working with the Japan International Cooperation Agency (JICA) to provide 50 solar-powered units to community centres, medical facilities and other communal spaces in the Lóvua refugee settlement.

The units, donated by JICA and Panasonic, consist of a solar panel, three LED lamps, and a rechargeable battery that can also be used to charge mobile phones.

“We hope these solar lamps can be installed in public facilities to be able to extend the services and provide light in the dark,” said Yuzo Kitamoto, deputy representative for the Japan International Cooperation Agency in Angola, after a visit to Lóvua in December.

Women and girls arriving in Lóvua are also receiving solar-powered torches, part of the dignity kits that are a standard part of UNFPA’s humanitarian response. Some 2,000 dignity kits – which contain hygiene items such as soap, underwear and sanitary napkins – are being handed out, with more on the way. 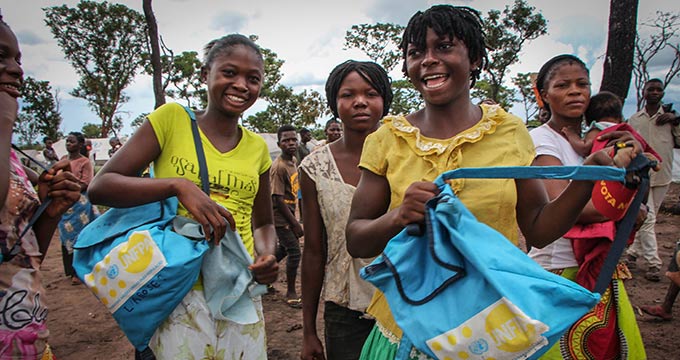 UNFPA is additionally partnering with the UN Refugee Agency to deliver solar street lights to the settlement. And in partnership with Médicos del Mundo, UNFPA has set up women-friendly spaces, where women and girls can rest, socialize, and learn where to receive reproductive health services and help for survivors of gender-based violence.

As for Ester, she is determined to move forward. “I hope for a good life with my family here in Angola,” she said. “I am too afraid to return now.”