KAILAHUN/NEW YORK – As Ebola infections continue to escalate at an alarming rate in West Africa, UNFPA-trained contact tracers in Sierra Leone are playing a vital role in mitigating the public health crisis.

Ebola is one of the world’s deadliest diseases: Case fatality rates can range from 25 to 90 per cent. In Liberia, Guinea and Sierra Leone – the countries most affected by the outbreak – some 8,376 cases of Ebola have been reported, and 4,024 people have died, according to a 10 October report by the World Health Organization (WHO). Additional cases have been reported in Nigeria, Senegal, Spain and the United States, countries with “localized transmission” of the disease.

Yet the spread of Ebola is far from inevitable. Rapid identification, isolation and care by health workers using strict infection control measures can curtail an outbreak. Unfortunately, such measures are often difficult in countries with weak health systems – such as those worst affected by the disease.

But contact tracers in Sierra Leone are helping to speed identification, isolation and treatment. As of 10 October, UNFPA had helped train 2,100 health workers to serve as contact tracers and health supervisors in the country. 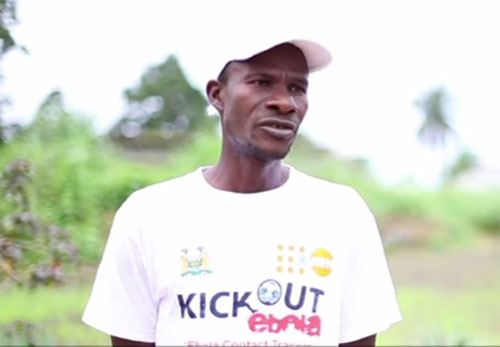 In the front lines

Since its first Ebola case was confirmed in May, Sierra Leone has seen 2,950 cases, including 930 deaths, according to WHO. Infections have been identified throughout much of the country.

“People that have come in contact with either a dead body, somebody that has died of Ebola, or somebody that is sick of Ebola, those people, we call them contacts,” James Squire, a doctor and district medical officer in Kailahun District, said in a film released by UNFPA. “The contact tracers... monitor them on a daily basis for 21 days.”

“If there is anyone who develops symptoms, these people are then removed and put into holding centres. They are then tested, and if they are found to be positive, they are taken to treatment centres,” said UNFPA’s Representative in Sierra Leone, Bannet Ndyanabangi.

“We have partnered with telephone companies to ensure that every district in Sierra Leone has at least 100 contact tracers,” Dr. Ndyanabangi noted. “The contact tracers are then deployed. They are given telephones – cell phones – they are connected, and they report to the surveillance officers at chiefdom level.”

The process can be time-consuming and laborious.

“When they assign us to a contact, we go there two or three times a day,” said Nyuma Ensa, a contact tracer. “For some people, you go there in the morning but they are gone... So we go there in the afternoon, and meet them, we talk to them. If they are not home, we come back in the evening.”

With persistence, the contact tracers earn people’s trust. “They tell us how they feel right away when they are not feeling well. They will tell you that they didn’t sleep well. They tell us that they had a fever or headaches,” Mr. Ensa explained. When this happens, “we call our supervisor to come see their symptoms and make referrals.

The tracers have been extremely diligent: According to a 13 October report by the Government of Sierra Leone, 98 per cent of all contacts had been seen by contact tracers in the previous 24 hours.

And their efforts are saving lives.

“On the 13th, they knew I had contact with an Ebola patient,” said Philip Jusu, a resident of Kailahun District. “On that very day, the 13th, they filled a form for me” assigning a contact tracer to his case.

“He will ask, ‘Philip, how did you sleep?’” Mr. Jusu said, describing the process. “Then he will ask me if I have a headache, if I’m feeling cold, vomiting, have frequent stool, blood in my eyes or if my eyes are red.”

He tested positive for Ebola and was taken to a treatment centre. Mr. Jusu was extremely fortunate – he made a full recovery.

Today, the impact of the Ebola outbreak extends far beyond those infected.

Health systems are overwhelmed, limiting access to routine and life-saving care. In some places, fear of health workers has exacerbated the issue. Markets and supply systems have also been severely disrupted.

Despite these problems, contact tracers are playing a critical and courageous role in the Ebola response. UNFPA is also supporting contact tracing and monitoring activities in Liberia and Guinea, among other measures.

“Surveillance is one of the most important pillars in communicable disease control and prevention,” said Abu Bakarr Fofanah, Sierra Leone’s Minister of Health and Sanitation.

“The contact tracers have helped,” Dr. Fofanah said, “and have really made a tremendous contribution.”