AMMAN/NEW YORK - Over 200,000 Syrian refugees are living in Iraq, having escaped the four-year-long conflict in their homeland. Yet for some, the move offers little respite from crisis: A UNFPA assessment has shown that northern Iraq is facing its worst humanitarian and health emergency in years.

Northern Iraq is now gripped by violence, which has displaced an estimated 1.45 million Iraqis. Like the conflict in Syria, the crisis in Iraq has been declared a "Level 3 Emergency," the highest-level emergency designation.

The combined needs of Syrian refugees and displaced Iraqis have overwhelmed medical facilities and personnel, according to the UNFPA assessment . 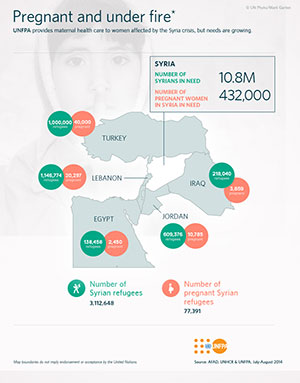 The Syrian crisis has put millions in jeopardy, including some 77,000 pregnant refugees. Click to enlarge.

"The most vulnerable group"

As the crises in both Iraq and Syria grow, the needs of Syria’s refugee women are mounting.
Idris Saleh , head of Domiz camp in Iraq’s Duhok Province, told UNFPA, “Women and girls are the most vulnerable group among the refugees… There is not enough attention to their health.”
There are an estimated 218,040 Syrian refugees in Iraq, including 3,859 pregnant women, according to estimates by the UN High Commissioner for Refugees (UNHCR) and UNFPA.
UNFPA is providing integrated sexual and reproductive health support, including protection services and maternal health care, in the seven camps and in host communities.
Safe delivery kits are being supplied to health facilities, each containing the drugs and equipment required for childbirth. Kits are also provided to support complicated deliveries, such as Caesarean sections.
UNFPA has also distributed dignity kits, containing essential hygiene supplies, and is providing post-natal care and family planning services.

UNFPA is also providing a range of services to help refugee women support themselves and their families. 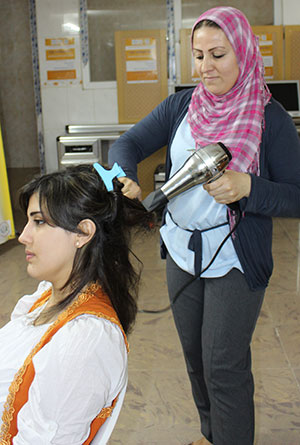 Yafa runs a hair salon after receiving courses through the Al Messala Women's Centre in Erbil, Iraq. Photo credit: UNFPA/Ruba Hikmat
Yafa, a 31-year-old refugee, said her family struggled when they fled to Erbil, Iraq. “We left the house, left our dreams and memories and belongings,” she said.
UNFPA is reaching refugee women like Yafa with information sessions, psychosocial support and courses teaching income-generating skills. Through the UNFPA-assisted Al Messala Women’s Centre, Yafa received a free a hairdressing course and was able to open up a home business.
“I feel more empowered, professional and confident enough to run my own business,” she said. The income is helping to support her, her husband and their daughters, Helena, 7, and Khemly, 4.
The centre also provides health service referrals and support groups, and it teaches women about their rights.
“I met a lot of new friends from Kurdistan and Syria. We started talking and sharing our experience and the reason that forced us to leave our home,” Yafa said.
Sara Hussein, a social worker at Al Messala Women’s Centre, says the Syrian women she has met have impressed her with their resilience. They “insist on wanting to learn, to work, and they keep benefiting from each other,” she said.