NIAMEY, Niger – In the courtyard of a health centre in Maiki Village, in Niger’s Maradi Region, men are gathered under the shade of a makeshift shelter. Sitting on colourful carpets, they are deep in conversation about a topic that once would have been hard to discuss: their wives’ reproductive health.

This is the village’s School for Husbands, part of a programme started in 2008. When the initiative was launched, few thought it would succeed.

“Years ago, it would have been difficult to talk about such an issues with men in this village,” said Almoustapha Boubacar, the manager of Maiki health centre.

Putting women's health on the agenda

Niger ranked last on measures of gender equality in the 2013 Human Development Report. Prevailing social norms see men as the decision-makers in their households, even over issues of women’s health. 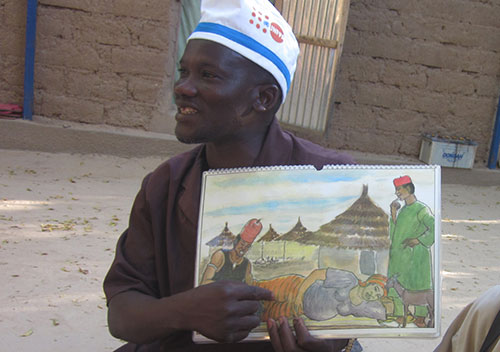 Men speak about women's reproductive health care at the Maiki School for Husbands, in the Maradi Region of Niger. Photo credit: APANEWS

Connected to women’s low status is the country’s high maternal death rate – some 590 women die from complications of pregnancy or childbirth out of every 100,000 live births, according to the 2013 State of the World Population report. Only 14 per cent of women use any form of contraceptive, and only 12 per cent use a modern contraceptive method. These numbers contribute to Niger’s high fertility rate, which increases the risks to women’s health.

Schools for Husbands aim to change this. The schools are not formal institutions. Rather, they are gatherings of married men who discuss among themselves possible solutions to reproductive health concerns.

The schools are also selective: Members must be husbands, they must be at least 25 years old, and they must be accepting of women’s participation in community life. These men become guides and role models within their communities. Some schools also work in collaboration with a group of women.

The concept started modestly in Zinder Region, but it thrived and eventually spread to other regions, including Tahoua, Dosso, Tillabery and Maradi, where many villages now run their own Schools for Husbands. In Maiki and surrounding villages, there are now five Schools for Husbands.

Keen to do more

Members also visit nearby families to discuss how pregnancy and childbirth increase the risks to a woman’s health. The members explain that family planning methods can improve the long-term well-being of a woman and her family. Still, they sometimes encounter stiff resistance from men dismissive of family planning.

The members are keen to go even further. Maiki’s School for Husbands found housing for a local midwife, and they provided soap and money to a new mother who gave birth under the care of a skilled birth attendant.

“Here in Maiki, since the setting up of the husbands’ school in 2011, the number of women using family planning methods has increased,” Mr. Boubacar said. He added that in the first nine months of 2013, about 1,700 women received prenatal consultations at the health centre, a 94.8 per cent increase since 2012.