Saving a Girl in Dadaab From More Suffering

DADAAB, Kenya -- Dr. Khisa Weston Wakasiaka, a fistula expert working with the African Medical and Research Foundation, recently returned from Garissa, a city in the North Eastern Province of Kenya, where he performed several surgeries on refugees from Daadab, often described as the largest refugee camp in the world.

“One of the patients, a 17-year-old girl, Madina, touched my heart,” Dr. Weston, a Kenyan, says. “We just celebrated the 7 billionth baby, but what this girl went through is so shameful that looking at her would make you cry.”

Madina was pregnant when her family and other villagers left Somalia for the refugee camp. She went into labour somewhere between Somalia and Dadaab, which is near the Somali border.

A villager helped her deliver, but the baby, a boy, was born dead. “The birth was followed by hemorrhage, and by the time they reached the camp she was in shock,” Dr. West explains. “Her sister told us that they almost abandoned her on the way, but her husband voted against it.”

“She can’t remember exactly, but she told us that she was in labour for about 15 days,” Dr. Weston says. “She couldn't push due to exhaustion and her baby got stuck in the birth canal for days.”

When Madina reached Daadab, she was immediately referred to the Garissa hospital, a three-hour drive away. In Garissa, she was attended by a visiting gyneacologist from the Rotary doctors.

“The family tried to suffocate her, a common practice in some nomadic cultures when one is too sick and can't migrate with the rest of the group,” Dr. Weston says of Madina’s trek to Dadaab. “Had it not been for the hospital staff, she would be dead by now.” 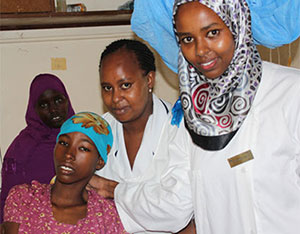 Madina with a doctor (far right), the nurse in charge of the fistula ward (middle) and her sister (back), who brought her from the Daadab refugee camp for treatment in Garissa, three hours away.Photo: Dr. Khisa Weston Wakasiaka

While Madina was examined under anaesthesia for the bleeding, the doctor who examined her found an extensive fistula and uterine atony, a condition in which a woman's uterine muscles lose the ability to contract after childbirth. Fortunately, the bleeding was controlled and doctors were able to stabilize her with a blood transfusion.

Later, she received a colostomy to ease the healing of her birth canal. However, this treatment failed and she had to be transferred to the Kenyatta national hospitals, an eight-hour-drive from Garissa. After some time there, she was returned to the camp.

At that point, Madina was looked at again. “When I examined her, I found an almost empty pelvis,” Dr. Weston says. It turned out that Madina had an extensive double-fistula with hardly any tissue left. It took the doctors four hours to repair her urethra and her rectum. Madina also has foot drop in both legs, a consequence of nerve damage sustained during obstructed labor, leading to an inability to use the lower limbs. As a result, she can’t walk without help.

Madina’s story is a sad reminder of how poor access to reproductive health can negatively affect women in many developing countries.

“It is not enough to shout that we need safe motherhood,” Dr. Weston says. “It demands much more. Unnecessary conflicts, early marriages and no education, compounded with extreme poverty and lack of access to health care, especially for pregnant women, today, in this century is a shame.”

“Madina is dry and healing, but we pray that she remains that way and women no longer have to endure the same ordeal,” he adds.

Saving a Girl in Dadaab From More Suffering