In the Sahel, where motherhood is deadliest, midwives are saving lives

SEBOUGOU, Mali – One day while driving on a highway, Fatoumata Diallo picked up a pregnant woman walking home from a prenatal checkup more than 10 kilometers away, a very long distance for any woman in her state to go on foot. It was not the first time she had witnessed these challenges in her home village of Sebougou in Mali.

"I grew up here and saw the difficulties that women and children have," said Ms. Diallo. The bus that connects the village to nearby towns doesn't run after dark, and Sebougou's only health clinic lacks basic equipment and staff. Babies are often delivered by nursing assistants.

When Ms. Diallo heard about a new midwife training course offered by the Sahel Women’s Empowerment and Demographic Dividend (SWEDD) project, she didn't hesitate to apply. Soon after completing the training, Ms. Diallo decided to open her own private practice, and is now able to save lives.

"Giving birth to a child is a great feeling," she said. "When a woman gives birth and she and the child are well, it's a moment of great, great joy."

SWEDD data from Mali show that in 2016 there were 2,657 midwives and obstetric nurses in the entire country — only 1.4 midwives for every 10,000 inhabitants. That ratio falls well below the standard of 23 doctors, nurses or midwives per 10,000 people recommended by the World Health Organization.

In Mali, these services are particularly urgent because of the high number of vulnerable mothers and babies. According to a 2018 demographic survey, some 36 per cent of adolescent girls in Mali had already begun childbearing. Pregnancy and childbirth are the leading cause of death among adolescent girls, and their newborns face higher rates of dangerous complications, as well.

In addition to basic care, Ms. Diallo’s practice offers prenatal and postnatal care and delivers babies, services that have helped reduce maternal and infant mortality rates in the community.

As in any modern hospital, every woman who enters the clinic gets her blood pressure and temperature checked. A doctor checks the shape of the abdomen and prescribes an ultrasound scan to confirm pregnancy.

Ms. Diallo also talks to her patients about family planning — and procures whatever they may need.

"If a woman wants birth control, we present [her] with all the methods. We have intrauterine devices, condoms, cycle beads, tablets, the pill and injections," Ms. Diallo explained. "[Then] it is up to the woman to think about it and decide which one she wants to use."

Access to modern family planning is scarce across most of the Sahel, where maternal and neonatal mortality rates are among the highest in the world. Pregnant women, especially in the region's rural areas, lack access to adequate delivery care services.

The midwifery training courses are just one small part of what SWEDD offers. The region-wide initiative aims to raise the status of women and girls, improving their health, education prospects and future earning potential. The ultimate goal is to help the region achieve a so-called demographic dividend: with its young population, the Sahel has an opportunity to boost its own development and economic growth by empowering women and girls to fulfill their potential through education, family planning and other investments.

The SWEDD project is financed by the World Bank and implemented by the governments of Benin, Burkina Faso, Chad, Côte d’Ivoire, Mali, Mauritania and Niger, with technical support from UNFPA.

In particular, UNFPA is supporting SWEDD efforts to provide pre-service training to build the capacities of midwifery training institutions and internship sites, and to develop and update the training curriculum. UNFPA is also helping train midwives by setting up and implementing a clinical mentorship programme in remote areas, and creating networks for emergency obstetric and newborn care in participating countries.

So far, the SWEDD project has helped train over 6,600 midwives across the implementing countries.

Ms. Diallo is delighted by the warm reception she has received from patients and the community since she opened her practice in 2016. The first woman to give birth at her clinic was so happy that she was able to walk there, that she named her daughter after Ms. Diallo.

Aminata, this first baby’s mother, praised Ms. Diallo for the care she received.

"[Ms. Diallo] comes to help you when you need it. That's a sign of a good person," she said. She hopes that her daughter will become a midwife when she grows up.

A version of this story was first published at www.worldbank.org. 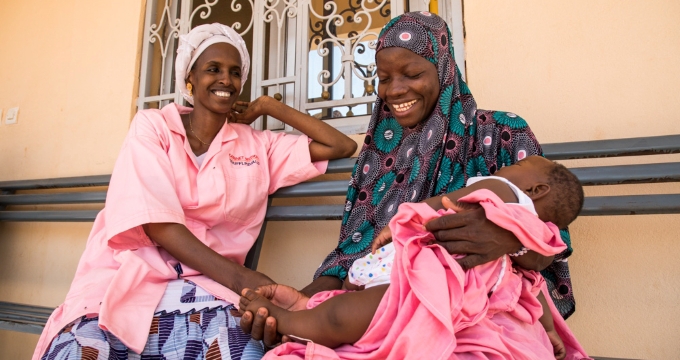 In the Sahel, where motherhood is deadliest, midwives are saving lives