Safe spaces offer relief as fighting in Marawi rages on

PAWAK, Philippines – Jamela Sani stood before a group of girls and new mothers, explaining that violence against women is an abuse – and that help is available. They were gathered in a tent in Pawak, a village about five kilometres from the city of Marawi, in the Philippines, where fighting continues to rage between government forces and the Maute and Abu Sayyaf armed groups.

The tent is one of UNFPA’s women-friendly spaces, safe places for women and girls displaced by the violence to share experiences, rebuild a sense of community, and acquire skills and information.

Ms. Sani is a facilitator – a kind of mentor and coordinator – at the Pawak safe space, which was established in partnership with the Department of Social Welfare and Development.

Facilitators conduct information sessions about protections for women and children, and can refer women to support services, such as counselling, psychosocial support and health services. They also provide sensitive support and referrals to survivors of gender-based violence. 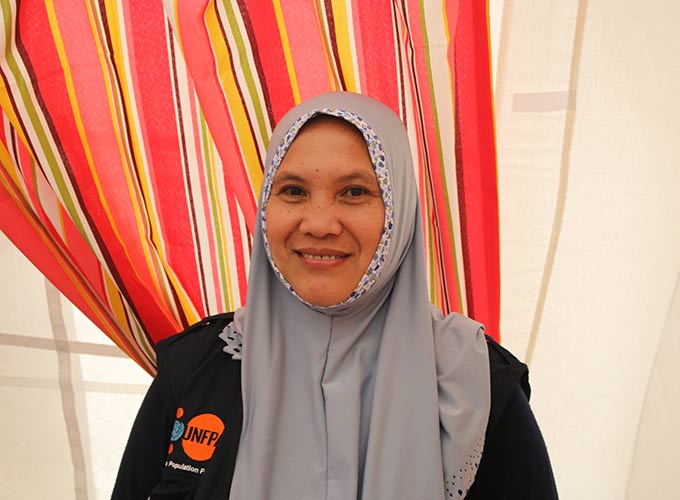 Jamela Sani, 48, has been working as a facilitator at one women-friendly space since fleeing her home in May. © UNFPA Philippines

Ms. Sani, 48, started working as a facilitator after she fled her home in May, when fighting erupted.

She, her husband and children are among the nearly 360,000 people who have been displaced by the fighting. The violence has taken a major toll, with a state of martial law declared on the long-embattled island of Mindanao.

As is often the case in humanitarian settings, the crisis has increased risks for women and girls. Those living in crowded evacuation centres, for instance, typically lack privacy, leaving them vulnerable to attack or abuse. Women and girls also have health needs – such as the need for reproductive health care, antenatal services or menstrual hygiene supplies – that are easily overlooked in a crisis.

After they fled, Ms. Sani feared for her family’s safety and for the condition of their home and store. “I felt hopeless,” she told UNFPA.

Her husband learned that UNFPA’s women-friendly spaces were looking to train displaced people as facilitators, and he encouraged her to join, thinking it might help her cope. 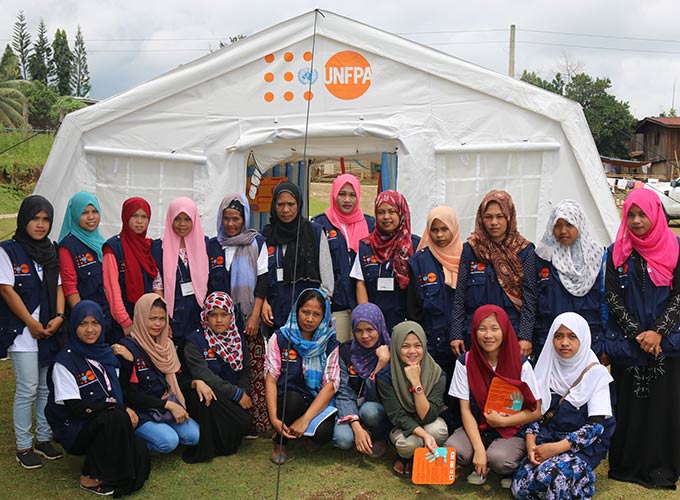 UNFPA facilitators at a women-friendly space in Pantao Ragat. Some 200 UNFPA-trained facilitators are working in 10 spaces in areas wth high concentrations of displaced people. © UNFPA Philippines

“Being a facilitator has reduced my stress,” she said. “It makes me happy to help my fellow displaced people learn about women’s rights, violence against women and trafficking.”

One of the women Ms. Sani has spoken to is 33-year-old Jalilah Amerol, who gave birth to her sixth child just days after fighting erupted.

She was forced to flee Marawi on foot with her mother and children, making the difficult journey to an evacuation centre in the neighbouring municipality of Saguiaran.

Ms. Amerol heard about the women-friendly space from other displaced women.

“I enjoyed participating because I learned many things here I never knew about, such as the rights of women and abuses towards women and children,” she said.

“I think more women should go,” she added.

The spaces are spread across municipalities with some of the highest concentration of displaced people.

The programme, which is funded by the United Nations Central Emergency Response Fund and Australia, aims to reach 16,800 women and girls affected by the conflict.

“Women and girls are more vulnerable in emergencies such as in this crisis. They have specific needs,” explained Klaus Beck, UNFPA’s Representative in the Philippines. “They need protection from gender-based violence and services for safe pregnancy and childbirth,” he added.