MOGADISHU, Somalia – In the Banadir Hospital in Mogadishu, 29-year-old Sharifa Abdullahi held her newborn with a growing sense of awe – and triumph. She had just survived a gruelling 18-hour labour that could have taken her life and the life of her daughter.

Ms. Abdullahi lives in the Hodan displacement camp, a dusty settlement in Mogadishu where thousands of families crowd into makeshift shelters. As in much of Somalia, health services in the camp are limited. Two years before, lacking proper care, Ms. Abdullahi had lost her first pregnancy to complications. She feared her second pregnancy might end the same way.

But this time, she was able to seek care from a “maternity waiting home” that was established in the Hodan settlement in early 2013. It is one of 34 such facilities in Somalia, which provide a range of health services to expectant mothers. And in their last month of their pregnancy, women are invited to stay in the waiting homes under the care and observation of skilled birth attendants.

Ms. Abdullahi chose to lodge in the Hodan waiting home at the end of her pregnancy. When she went into labour, the health workers recognized something was amiss. They transferred her to the nearest hospital, where her daughter was safely delivered by Caesarean section. 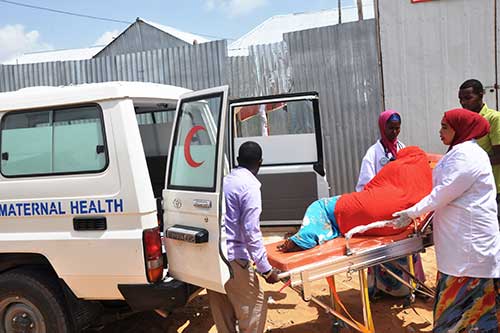 A pregnant woman experiencing labour complications is transferred to a hospital from a maternity waiting home. © UNFPA Somalia/Ruth Solomon

“I was lucky that I had gone into the maternity waiting home before labour even started,” said Ms. Abdullahi. “The health specialists were able to monitor my pregnancy as I approached labour. They quickly made a decision to transfer me to a hospital after noticing complications.”

Motherhood can be a dangerous enterprise in Somalia, where almost three decades of conflict have left the health system in tatters. There are about 1.1 million displaced people in Somalia, many of them living in camps.

Over a Somali woman’s lifetime, she will face a one in 18 chance of dying from causes related to pregnancy or childbirth – the second highest lifetime maternal death risk in the world. The situation is grim for children, as well: Somalia has the world’s fourth highest child mortality rate.

The maternity waiting homes were created to help improve the odds for women and their babies. Predominantly located in displacement settlements, these facilities offer essential care to expectant mothers at all stages of pregnancy. Women are encouraged to visit the waiting homes as soon as they realize they are pregnant, so they can receive antenatal care and advice on how to stay healthy.

Women in the final stages of pregnancy can stay in a room at the waiting home, where they enjoy free meals and ultimately deliver under the care of a skilled birth attendant.

If a problem is detected, as in Ms. Abdullahi’s case, the women are referred to a nearby hospital for higher-level care, said Samia Hassan, UNFPA’s humanitarian coordinator in Somalia. 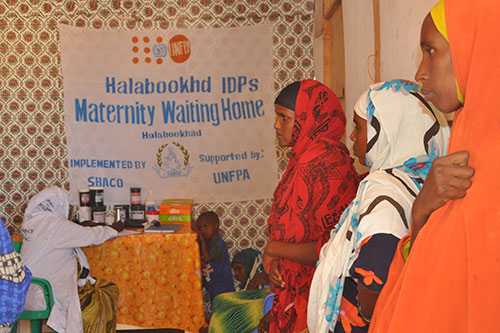 The waiting homes – which are run by six local partners, with support from UNFPA and the health ministry – have performed 30,000 health consultations in the past year alone, Dr. Hassan said.

“To date, 16,724 pregnant women delivered in the maternity waiting homes, and over 1,300 pregnancy and childbirth complications were identified and referred for further management and care,” she added.

“The project is a big success. For instance, it was really great to hear a religious leader in the Rabitug [displacement] camp telling us that the number of funerals he has administered after a maternity waiting home came to his settlement has reduced very much,” she said.

The waiting homes also fill a critical gap in the country’s health system, which lacks enough hospitals to accommodate the needs of all women.

“The maternity waiting homes are taking the pressure off our few hospitals, and a lot of women are being saved from dying in childbirth,” said Naima Abdulkadir Mohamed, the health ministry's reproductive health director.

“We want more of these homes in all parts of the country,” Dr. Mohamed added.