BRUSSELS – The EU/UNFPA Reproductive Health Initiative for Youth in Asia (RHIYA) officially ended last week, but its legacy will continue, according to a number of speakers at the high-level conference ‘Adolescent Sexual and Reproductive Health: The Way Forward For Asia’. 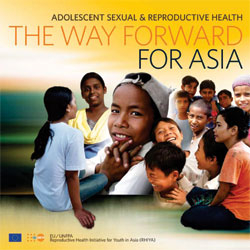 This brochure was prepared for conference marking the RHIYA conclusion

“We wish, today, to bring a close to the programme but, at the same time, to ensure there is an impact also here in Europe – feeding back into policy discussions and informing European experts,” said Erich W. Muller of the EuropeAid Cooperation Office.

RHIYA, which was funded by the European Union and implemented by UNFPA in collaboration with 80 local and international partners, made special efforts to reach disadvantaged and vulnerable adolescents and youth, including those in and out of school, married and unmarried, street youth, factory workers, rural migrants and sex workers, among others. The programme also emphasized gender equity.

At the conference marking the end of this joint 7-country initiative, parliamentarians, civil society representatives and officials from the seven Asian countries and the EU discussed achievements and made recommendations for future programmes in the regions.

But just as important, said Thierry Lucas, the RHIYA programme manager, are some of the hard-won but less quantifiable achievements that will pay dividends over the long term, such as changed cultural attitudes toward reproductive health education and services for young people, and new policies and guidelines, which are fundamental to the scaling up of successful efforts.

For example, in all countries covered, it was important to acknowledge the sensitivity of addressing adolescent reproductive health issues, and to create an enabling environment for their discussion. This often required extensive community advocacy efforts involving parents, teachers, religious leaders and other leaders. In Pakistan, a booklet developed on ‘Reproductive Health and Islam’ served as the basis for a series of seminars taking place throughout the country.

In several countries, RHIYA also contributed to mainstreaming of adolescent sexual and reproductive health issues into government policies and programmes.

In Viet Nam, for example, RHIYA advocacy efforts contributed to the integration of sexual and reproductive health issues into the first ever Youth Law, which was approved by the National Parliament in November 2005.

And in Nepal, technical expertise and resources from RHIYA contributed to enhanced clinical protocols and management guidelines for the Family Health Division’s adolescent sexual and reproductive health.

Although RHIYA officially began in 2003, it was built on the success of an earlier programme to improve reproductive health in Asia, which used a similar modality of cooperation between UNFPA and many other implementing organizations and agencies. Together, the initiatives represent nearly a decade of collaboration and investment in the reproductive health of young people in the region.

Best practices from the RHIYA programme, as well as remaining challenges, are documented in a series of booklets, a video and an interactive exhibit.