KABUL — In mid-December, Maliha walked for five days to reach Faizabad, the capital of Badakhshan, in northeastern Afghanistan, to receive her award as best midwife in the province. She felt proud as she went onstage to be honoured for her work in her community health clinic. Though Maliha is just 25 years old, she is a local hero, having delivered hundreds of babies since graduating from the Community Midwives Education Programme six years ago.

With technical support from the Afghan Midwives Association, the programme trains women in rural areas that lack health clinics. In return, trainees are required to commit to returning to their villages for six years to set up a practice in a ‘family health house’, a relatively new health model in the country. 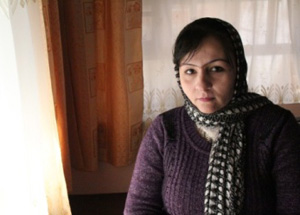 The clinic is either an annex to the midwife's housing compound or close to her home. It consists of two rooms built by community labour, known as ashar, with the roofing, beams, tiles and windows provided by UNFPA as in-kind contributions. The midwives are responsible for providing round-the-clock services to neighbours within a two-hour walk from the health house.

The process for setting up the clinic begins long before the midwife is trained. Community approval must be obtained so that the elders and everyone else are behind it. Once that happens, the midwife’s husband, father and father-in-law will also endorse the project, making it a highly respected entity in the community.

In fact, the midwives’ role is growing so popular that men are apparently looking for a wife who is a midwife because she can be an economic resource for the family. Competition is keen among women in the community to be trained, and they must get high test scores to be chosen.

Two volunteer community health workers—one male and one female—in the family health house assist the midwife; though they also compete for the posts, they could technically be relatives, including husbands, of the midwife.

The health house approach is critical in rural regions, where most Afghans live, often isolated up to six months of the year because of brutal weather. Supporters say the model will reach up to 4,000 people by 2013.

To recognize the major role that midwives can play in Afghanistan, where giving birth remains a dangerous endeavour, the Afghan Midwives Association, the Ministry of Public Health and UNFPA recently created the ‘Delivering Health, Saving Lives’ award to celebrate talented midwives on a provincial and national level, the criteria being those who have shown integrity, commitment and acted as positive role models for women empowerment in their community. 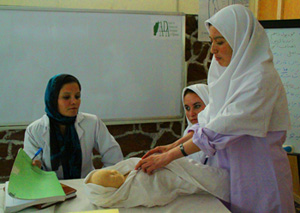 A classroom setting for the midwives programme, in Kabul. Photo: Zubaida Akbar

Maliha, who received a certificate signed by the Ministry of Public Health and a portable midwife kit, was the first honouree. She and others will be recognized at a national ceremony in Kabul in May commemorating International Day of the Midwife.

It is no easy feat to be a midwife in Afghanistan, where only about 2,331 of them serve a population of about 6.4 million women of reproductive age. The combined total of midwives, nurses and doctors amounts to less than 1 for every 1,000 people, according to the State of the World’s Midwifery 2011 study by UNFPA. That number is especially low, considering Afghanistan’s high fertility rate (5.1 children for each woman, according to the comprehensive 2010 Afghanistan Mortality Survey 2010 report.)

Midwifery training programmes, organized by international agencies, national ministries and the United Nations, are addressing the need in Afghanistan for more skilled maternal care. And Afghanistan has been making important progress in reducing maternal death rates -- showing a 22 per cent decline since 2000, according to the UNFPA report.

Remote areas report show disproportionately higher rates of maternal death than urban areas, however, since they lack infrastructure and distances to service centres are far. Infant death rates have also decreased, the Afghanistan Mortality Survey reports, as the country is making strides in improving public-health services.

“In a country like Afghanistan, where women, especially in remote areas, can't really access medical facilities because they lack women heath workers, a midwife can save a woman's life,” said Sabera Turkmani, president of the Afghan Midwife Association.

That is all the more reason to award a midwife like Maliha, who helps up to 25 women go through delivery in her village every month.

“It is a huge responsibility to help these women and save their lives, but I feel lucky to have this opportunity to help other women,” Maliha said upon receiving her award.

Students are taught for two years, during which they gain a basic knowledge of obstetrics, neonatology, public health, family planning, prenatal care, delivery care and more. The school provides access to medical and nonmedical equipment and is linked with clinics for residencies. The cost to train one midwife is $20,000 to $25,000.

Parisa, the midwife winner from Herat, noted that women in remote districts cannot afford to come to the hospitals in Herat city center.

“When I graduated from the Midwifery Institute of Herat two years ago, 40 other women graduated with me,” she said. “Right now, I know that 39 of them are working in different clinics in Herat city and districts. This is a very good sign. This means that now more women have some kind of access to a health-care provider.”

Cultural restrictions, low economic status, little awareness about health issues, problems of access, gender inequities and the limited number of female health-care workers challenge the already meager reproductive health system in the country, where only a quarter of all births are attended by skilled health personnel. Currently, women represent a minority of the health-care workforce.

“UNFPA maintains its commitment of support to the Government of Afghanistan and professional societies like the Afghan Midwives Association to address the critical issue of maternal health in Afghanistan,” said Dr. Laurent Zessler, the UNFPA representative in the country. “There have been improvements in coverage of key health interventions, and multiple programmes are being implemented that are contributing to this improvement, but there is much work yet to be done and donors and partners should remain engaged and committed in Afghanistan.”

UNFPA Afghanistan’s support of midwifery includes the schools of the Community Midwifery Education programme; development of a regulatory system for midwifery and policy and strategy for nursing and midwifery services; capacity building for public-health staff and midwives at provincial levels; and support of professional associations, such as the Afghan Midwives Association.

Mobile health teams: On the road saving lives in Afghanistan’s most remote…