BISSAU, Guinea-Bissau – Until last month, when a woman needed an emergency Caesarean section on the island of Bubaque, in Guinea-Bissau, she had to take a five-hour boat ride to the capital city. And the boat ran only once a week.

Bubaque’s regional hospital – which serves 17 islands in the Bijagos archipelago – did not have any surgical ward at all. It also lacked the ability to provide emergency obstetric and neonatal care.

Women in need of urgent care often resorted to taking motorized canoes, which are slower and less reliable than the once-a-week passenger boat, across long stretches of the Atlantic Ocean.

“The women of the Bijagos risked their lives traveling from Bubaque” in search of treatment, explained Kourtoum Nacro, UNFPA’s representative in Guinea-Bissau.

Since 2015, an average of 14 pregnant women with obstetric complications were evacuated from the area to Bissau each year. Some did not survive.

Life can be precarious for women in Guinea-Bissau. The country has one of the 20 highest maternal death rates in the world, according to 2015 United Nations data.

Most of these deaths could be prevented with access to quality health services. Yet an estimated 79 per cent of the country’s need for skilled midwifery care is unmet, according to UNFPA data, and fewer than half of the country’s women give birth under the care of a skilled attendant.

But change is coming.

A new surgical ward, supported by UNFPA and the government of Portugal, opened at the regional hospital on 25 July.

It will serve not only Bubaque, but the entire area of Bolama-Bijagos, covering a population of over 35,000. The ward is expected to “reduce referrals of pregnant women to Bissau, reduce maternal deaths and, significantly, reduce the suffering of people living in the islands,” said midwife Arminda Correia, who is in charge of reproductive health issues in the region, at the ward’s inauguration.

With its new surgery facilities, the hospital will be able to provide a full suite of care, including primary health services, antenatal care, assisted deliveries, emergency obstetric and neonatal care, post-natal care, obstetric surgery and other general surgeries.

The ward in Bubaque is the sixth health facility UNFPA has constructed or renovated since 2015.

UNFPA also supported the construction of a surgical ward in Buba and established two maternity waiting homes – where women in later stages of pregnancy or experiencing complications can stay and receive care as they await delivery – in Buba and Catio, and rehabilitated one in Babuque. In far-flung Gã-Para, UNFPA rehabilitated an abandoned health centre and a health worker residence.

Five of these projects were supported by the H6 partnership, with funding from the Swedish International Development Cooperation Agency in Guinea-Bissau.

Constructing these facilities was a massive and complicated undertaking. The process involved coordinating with six consecutive governments – three in 2016 alone.

Reaching the health centre location in Gã-Para, for instance, required traveling over treacherous roads that wash out during rainy season.

The original health facility and health staff residence there had been abandoned for 19 years.

“Many women died giving birth at home because they could not get to the nearest health centre, located 25 kilometres away, in the town of Fulacunda,” said Ms. Nacro.

Now that the Gã-Para health centre has been restored – with running water and 24-hour electricity from solar panels – women “will no longer have to walk three days, while pregnant, to reach the closest health facility,” she added.

Today, all six of the health facilities are up, and five are fully operational. UNFPA is complementing these efforts by helping to train anaesthesia technicians – who were previously unavailable in Guinea-Bissau – and skilled midwives. 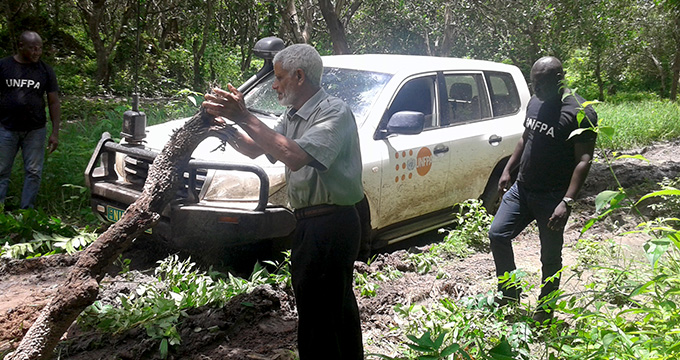