KARAMEH CAMP, Syria --- Against a hill of olive trees, thousands of tents are clustered together in a patchwork of white and blue. But due to recent heavy rains, the whole area is swamped in mud. Some 4,500 internally displaced persons, mostly women and children, live in the makeshift camp of Karameh in Syria’s Northwestern Idleb Province near the Turkish border. 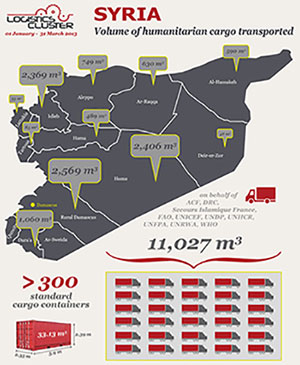 The first batch of life-saving UNFPA clean delivery and dignity kits, to meet the needs of about 6,000 people reached the area in mid-February. It was part of the first humanitarian assistance convoy into Syria, led by the Office for Coordination of Humanitarian Affairs, with UNHCR, WHO, UNICEF, WFP and UNFPA contributing support and urgently needed supplies.

“This joint relief convoy, involving eight UN agencies, demonstrates that outreach is possible from inside Syria,” said Radhouane Nouicer, the Regional Humanitarian Coordinator for Syria. “It encourages us to continue, to increase our efforts to reach more people in need across the country.”

This was the first of what is expected to be a series of convoys aimed at meeting the needs of some 25,000 displaced persons who have been enduring harsh winter conditions for months in five camps on the Turkish borders. The camps are the final point for Syrians hoping to cross into Turkey. There is almost no place within Syria that is considered safe, and humanitarian aid is not reaching many of those who ar most in need.

The situation is dire. Insecurity and difficult access have limited the delivery of assistance. Women and their children, who lost everything, are now dealing with a cold winter as well as a lack of comforts and necessities: food, clothing, medicines and basic supplies.

There are serious health concerns: the camp has one small pharmacy and one gynaecologist, providing basic health services for women in the three camps on a part-time basis. According to the pharmacist, all deliveries are now being referred to a private hospital in the area, most of reproductive health supplies are missing and women are also asking for contraceptive pills.

Through this convoy, UNFPA provided clean delivery kits, which contain basic items to ensure hygienic deliveries, such as soap, plastic gloves and sheet, and a razor to cut a newborn’s umbilical cord. For the next convoy, UNFPA is now planning to include sanitary napkins, which are in short supply, along with additional clean delivery kits, reproductive health medicines and contraceptives. In the camps outside of Syrian, UNFPA has been able to do more.

Maintaining one’s dignity is a challenge

The Karameh camp has only eight toilets, which is nowhere near enough to meet the needs of its inhabitants. Women told UNFPA that they are afraid to use the toilets at night on their own especially with no lighting and that they have to bathe in the tents, due to insecurity and lack of privacy and the poor condition of the sanitation facilities.

On its five-day journey to the Northwestern region of Syria, the United Nations convoy stopped overnight in the cities of Homs and Aleppo. This gave the convoy team an opportunity to conduct a field visit to the largest emergency shelter in Syria, located in the dormitory of the University of Aleppo. The shelter is currently home to some 28,000 internally displaced persons. UNFPA supports a reproductive health clinic for the residents.

Life is difficult in urban shelters as well

A visit to the clinic revealed the lack of basic reproductive health equipment and medicines. There is also a need for additional gynaecologists and internists to ensure the availability of services 24 hours a day. And not enough trained counsellors are available to address post-traumatic stress endured by the population.

Here, as well, displaced Syrians have difficulty staying clean due to overcrowding and poor access to basic toiletries, including sanitary napkins. UNFPA is therefore planning to procure 6,000 dignity kits for women, 2280 dignity kits for men and clean delivery kits for the next convoy to Aleppo.

Until the conflict began more than two years ago, Fatima lived outside of Syria’s capital, Damascus. She and her four children sought refuge in a rural area of Hama with her husband’s family. But a few months later, as the war was escalating, Fatima’s host family advised her that they were no longer able to support her family as resources were becoming scarce.

Fatima had nowhere to go. She had heard about the camps in Idleb in the northeast of Syria and thought that perhaps there she could get assistance and have a place to live for some time.

Fatima and her children have now been living in Karameh camp for three months. Life in the camp has been very difficult especially with the cold winter. Her children don’t go to school and she spends her days trying to keep her tent clean and organized. Women in the camp try to support each other as much as they can. They are all in constant needs of hygiene items. She has not seen a gynaecologist in over two years.

Fatima’s days are filled with worries: will she ever be able to go back home? What does her family’s future hold now that her husband is away?