ZAATARI, Jordan – “A girl I know from school here in the camp got married last year when she was 15,” Saba, 16, told UNFPA.

Saba encouraged her friend to delay pregnancy until her body was more mature. But the pressure to have a child was too great. “Three months ago, she was pregnant with twins but had a miscarriage. I told her she should stop because her body isn’t ready yet, but she and her husband are adamant about having a child.”

She added, “Now she is a month or two pregnant.”

Saba is a Syrian refugee. She shares a small, spare caravan in the Zaatari refugee camp with her four siblings and mother, Izdihar. 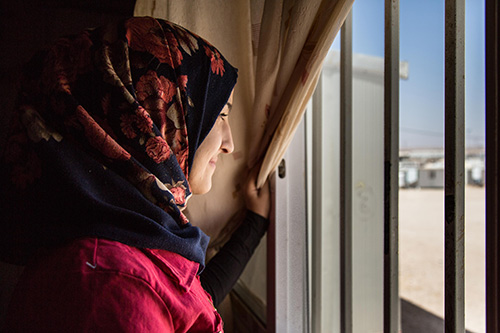 She and Izdihar spend their free time advocating against child marriage, a practice that has increased dramatically among Syrian families that have fled the devastating war back home.

Child marriage existed in Syria before to the war, they say, but it was comparatively uncommon. “Girls back in Syria sometimes married young, too, but we see it happening much more frequently here,” said Izdihar.

And the numbers are growing rapidly. According to the Jordanian government’s Higher Population Council, in 2015, 35 per cent of marriages among Syrian refugees involved a minor. In 2012, this number was 18 per cent.

Child marriage is a human rights violation, one that threatens girls’ health and futures. Yet refugee families in Jordan, Lebanon and elsewhere resort to child marriage to cope with insecurity and financial hardship.

“If an entire family lives in one caravan – the mother, the father and several children – then it is easier to give one child to another family as a bride,” Izdihar said.

But she and Saba are working to reverse this trend.

Through a partnership between UNFPA and the Institute of Family Health of Jordan, mother and daughter reach out to camp residents, young and old, about the benefits of delaying married life.

In awareness sessions for young people, Saba explains the consequences of early marriage: Child brides are less able to complete their educations and earn an income; they have less access to health care; and their children have worse outcomes. They are also more vulnerable to abuse and exploitation.

When a girl gets an education and a diploma, she has a chance to get a good job instead of a husband who controls her.

The pregnancy that often attends child marriage also puts girls at risk: They are more likely to suffer complications or even die.

Having a wedding may seem fun, Saba said, but it is better for girls to wait. “After the party, they will no longer see their friends, they will stop going to school, they will stop playing, being creative … They will have responsibilities and start washing dishes.”

She added, “But the saddest thing I see is physical abuse – the man being mean to his young bride.”

The antidote to child marriage, they say, is education.

“The girls that are in schools are the ones most likely not to get married,” Saba said. "When a girl gets an education and a diploma, she has a chance to get a good job instead of a husband who controls her."

"Many youngsters in the camp do not go to school because they feel they have no future. The chances of going to university or finding a job are very slim,” Izdihar said. “But several humanitarian organizations are working on allowing at least some education, and we should all grab this opportunity.”

Unfortunately, girls often have little choice in the matter – especially if they are married off. “My friend was really good in school, and she wanted to study, but the day she got pregnant they [her family] took her out of school,” Saba recounted.

“I miss seeing my friends who are now married,” she said. “We used to meet often, so I really miss having them around.”