KATHMANDU VALLEY, Nepal – “I was unaware of the fact that young people have the right to decide freely on matters related to their sexuality and that sexual and reproductive rights are basic human rights,” said Barun Kuinkel, age 17, after attending a sexual and reproductive health outreach session led by a peer educator from Y-PEER Nepal.

Like 600,000 other Nepalese, Barun’s home was completely destroyed by the 7.8 magnitude earthquake that devastated Nepal on 25 April, 2015, and he has been living in a temporary shelter with his family ever since.

Thousands of Nepalese are still living in such make-shift homes and camps, but slowly, things in this mountainous nation of 28.5 million are starting to return to normal. Even in the Kathmandu Valley, which was the region most impacted by the earthquake, schools are reopening and hospitals are being repaired. However, other critical services, such as educating young people about sexual and reproductive health and gender-based violence, are still lacking.

But the country’s youth are stepping up to fill the void. 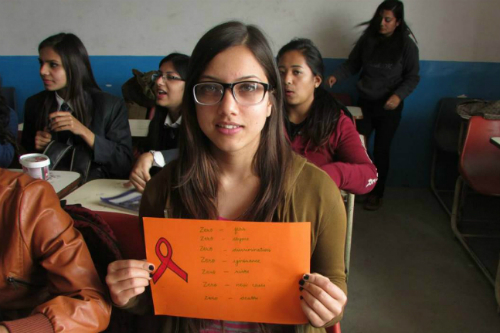 An adolescent girl learns about HIV and other sexually transmitted diseases during an outreach session. © Y-PEER Nepal

The earthquake and its aftershocks killed 9,000 Nepalese and destroyed 84 per cent of the nation’s health facilities, as well as schools, police stations and means of communication. This didn’t just leave many young people trapped in rubble without critical services. It left them traumatized.

In May 2015, shortly after the earthquake, UNFPA supported a needs assessment study of youth in 16 government camps in the Kathmandu Valley housing displaced individuals to better understand what services the youth most needed. Trained volunteer reseachers from Y-PEER helped conduct the interviews.

Nationally, rates of gender-based violence increased after the earthquake, according to UNFPA. In addition, access to contraception is low, and approximately 1 in 10 girls give birth before the age of 20, demonstrating the need for comprehensive sexuality education. However, the study also revealed large gaps in access to youth-friendly centres in the devastated region – meaning educators who hoped to reach the adolsecents would need to travel.

In response, UNFPA supported Y-PEER and two other youth-focused organizations, Yuwa and Yuwalaya, in establishing a peer education program that would send youth out into the camps and communities of Kathmandu Valley. They named the program Youth Leads in Emergency and trained 45 peer educators, ages 19-24, to talk to adolescents about sexual and reproductive health, HIV and other sexually transmitted infections and gender-based violence and to teach interactive lessons on self-esteem, coping with emotions and stress, creative thinking and other life skills. 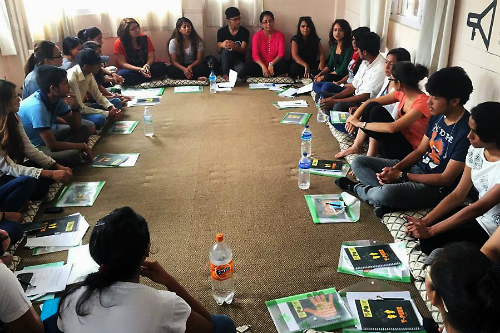 The volunteer peer educators meet to discuss their action plan before heading out into the field. © Y-PEER Nepal

“Some of the young people living in tents were mentally and emotionally weakened, so we were unsure about how and where to start,” says Sherpa, a 22-year-old peer educator. “They also felt shy listening to information about sexual and reproductive health and rights, but we developed trust, shared space with them and listened to their stories of pain. Gradually, they opened up.”

Peer educator Roshan Chhetri, age 20, lost his own home during the earthquake. However, he didn’t hesitate to join the team and volunteer his time. He has led 36 sessions and reports that he found the need for the services – and the adoscelents’ receptiveness to the messages – high. “For example, in the Chuchhepati camp there are no lights at night, and the boys would tease the girls when they came out of their tents to use the toilet,” he says. “The girls had no idea that it was an act of violence or what constitutes violence. After our sessions, they did and took steps to stop the abuse.”

Over a six-month period, the peer educator team conducted 720 sessions, reaching approximately 15,000 young people. They also started a bi-weekly radio program, Yuva Awaj (Youth Voice), to bring their lessons to areas in Kathmandu Valley and three surrounding districts that the peer educators could not visit.

When asked why he chose to volunteer his time and participate in the program so soon after his own life had been upended, Roshan said simply, “I felt like I had a responsibility to the affected young people. Like my colleagues, I wanted to do them a service.”