The UN agencies known as the H4+ support priority countries that take concerted actions to meet the Millennium Development Goals on maternal and child health. UNFPA has identified Zambia as one such country. The following feature shows some of the "Good Practices" the country has undertaken to expand access to reproductive health.

When Mabvuto Zulu returned to Zambia after studying medicine in Cuba, he worked for three years as the only doctor in a remote rural hospital. The experience of seeing 60 to 100 patients per day, nearly all of them pregnant women, changed his career plans: he is now earning a specialization in obstetrics and gynaecology in the capital.

"Where I was working, we were catering for 11 rural health centres, some of them 100 or 200 kilometres from the hospital," Dr. Zulu recounted. "None of those health centres had a doctor. None had the capacity to handle a complicated pregnancy or do Caesarean sections, as my hospital did.

"So by the time a woman with labour complications was brought to us, it would be too late. She would bleed out on the way because the roads are so bad. Sometimes they would call us on a mobile phone and we would send an ambulance, but because of the roads it was still too late."

AIDS is a major contributor to obstetric complications, and maternal death rates in Zambia, an epicentre of the AIDS pandemic, peaked at about 600 deaths per 100,000 live births in 2000, before AIDS treatment was widespread. Since then, they have been falling steadily, to around 470 per 100,000 in 2009.

But too many women are still dying, especially in rural areas, where complications are higher, and emergency obstetric care is less accessible. One of the big challenges in many developing countries is finding ways to overcome healthcare disparities that typically result between women in urban centres and those in more remote areas. According to several indicators, Zambia is making good progress in this regard.

As part of an overall effort to find out which approaches are getting results, UNFPA conducted a desk analysis that identified Zambia as a country that is working toward greater equity in maternal health care based on two key indicators: antenatal care and satisfied demand for contraceptives.

UNFPA then commissioned the UK-based health consultancy HLSP to learn more. The resulting report, Some Leading Practices in Equitable Sexual and Reproductive Health Service Provision from Zambia, was published in March 2012. "From the desk review all the way up to the distribution of the final report, our goal has been to raise awareness of practices that can enable countries to achieve high levels of equality in delivering sexual and reproductive health services," said Howard Friedman, a UNFPA technical specialist who helped manage the project. The Zambian experience is part of a UNFPA database of 'Good Practices' – approaches identified as being innovative, replicable, impactful and relevant to the country's important challenges.

Three key strategies undertaken by the Zambian government  were identified as being successful:

Dr. Zulu is one of the doctors who was encouraged to work in a rural area, despite the hardships, through a health worker retention scheme that is one of the factors behind relatively high levels of maternal care in rural Zambia.

Piloted in 2003, the Health Workers Retention Scheme is one of the practices that have enabled Zambia to maintain high levels of antenatal care in rural areas, according to the report. In exchange for a three-year contractual commitment to practice in a rural facility, health workers are offered a hardship allowance that increases with their distance from the capital.

Dr. Zulu, for example, received an additional $400 a month. The scheme also provides improved housing, school fees, car loans and upgraded medical facilities. As a result, the number of rural doctors rose from 15 in 2003 to 88 in 2005, with 57 of those renewing for a second three-year term, the report says. According to the Ministry of Health, a total of 1,125 health workers are now active in the scheme, including 170 hospital-based physicians like Dr. Zulu.

The remainder are nurse-tutors, clinical officers, nurses (some of whom received study fellowships from UNFPA) and environmental health technicians. The latter focus on disease prevention through, for example, improvements in sanitation.

The target for 2012 had been higher – 1,650 health workers in the scheme. But as Mutinta Musonda, Deputy Director of Human Resources at the Ministry of Health, points out, "It's a moving target. It moves up depending on the availability of funds." Ninety-two per cent of the cost of the scheme is funded by the Government of Zambia, which originally received additional support from the Netherlands. Since 2010, outside funding has come from USAID.

The report notes that as a result of the scheme, 92 per cent of medical sites reported an expansion of services, including emergency obstetric care. The scheme has been especially successful in deploying nurse tutors and lecturers, allowing a number of provincial training schools to be re-opened and the nurse deficit to be further addressed.

Zambia has HIV prevalence rates of about 14.3 per cent, down from 15.6 per cent in 2001, and AIDS is a complicating factor in about 37 per cent of maternal deaths. Keeping newborns free of the virus – and keeping their mothers alive and healthy – has proven to be one of the most successful strategies in addressing the AIDS epidemic so far. And it seems to be working in Zambia, one of the countries where new HIV infections have declined by more than 25 per cent since 2002, according to UNAIDS.

UNAIDS now aims to virtually eliminate mother-to-child transmission of the virus. Because women are often highly motivated to get medical attention during pregnancy, integrated care makes it possible to provide a range of services at once, including education about prevention, testing, counselling, family planning, and treatment. 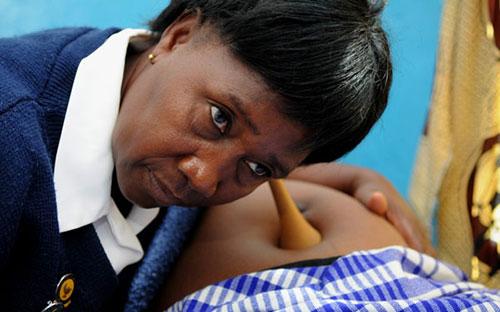 Dr. Zulu routinely offered HIV testing to every women and every man who came for antenatal visits. He estimates that 8 to 10 per cent were HIV positive. In such cases, he would provide antiretroviral drugs, but he says that, because of the distance from their homes, some women failed to return for new supplies and some babies were born HIV positive. He also provided these couples with a supply of condoms and explained the importance of using them.

Services to prevent mother-to-child transmission are now available in all of Zambia's 72 districts, including voluntary and rights-based family planning. In 2008, the estimated number of unintended HIV-positive births averted through contraceptive use was 12,823 for the year. This is one of the reasons Zambia's rate of new infections is falling.

Dr. Zulu notes that his hospital had no system for monitoring compliance with the treatment regimen. "This is a definite challenge in that the probability of a baby being born HIV positive is highly determined by the compliance of the mother in taking the antiretrovirals," he says. "This is an area where we have not done enough. I think our government and cooperating partners could take a leaf from countries like Uganda that have developed evidence-based, cost- effective systems to monitor the compliance of patients taking antiretrovirals."

At antenatal visits, mothers are offered a motivational talk in which they are informed of the advantages of being tested for HIV and what interventions they can receive if they test positive. After the talk, mothers are offered the test using the "opt-out" approach, in which HIV testing is performed unless the mother specifically refuses. Those who refuse to be tested after the group talk are offered private, individual counselling and testing, or even couples counselling, at most sites. Those who test positive are treated with antiretroviral therapy. The mothers are also screened for syphilis and, if positive, they and their partners are put on treatment.

The third effective practice is the scaling up of health services through partnership with faith-based providers, a strategy that UNFPA has championed for years. Around 50 per cent of all rural health facilities in Zambia, including Dr. Zulu's hospital, are run by the Churches Health Association of Zambia (CHAZ), an interdenominational organization representing Catholic and Protestant Medical Committees. CHAZ maintains 144 health facilities (including hospitals, health centres and health posts), and 11 health training schools in 56 of Zambia's 74 districts in all nine provinces. It currently supports 61 sites that provide antenatal services and PMTCT.

The organization complements government health care delivery by bringing additional human, financial and material resources, including drugs and supplies, to the health sector. It helps provide antenatal care and family planning as well, as appropriate.

When faith-based providers cannot offer certain family planning services, CHAZ arranges with the Ministry of Health's District Health Management Team to address the needs. National Health Strategic Plans and District Health Action Plans are based on joint planning and resource allocations from both CHAZ and the Ministry of Health. CHAZ's heritage as a faith-based entity, makes it highly respected and influential as a health partner in Zambia, and its adherence to transparency and accountability have helped maintain the long-term partnership with the government.

"UNFPA has witnessed time and again the efficacy of working with faith-based organizations," said Azza Karam, UNFPA's advisor on culture. " These organizations typically have far greater reach than larger multinational organizations can hope to have, as well as established credibility and the trust of the populace."

Childbearing is a leading cause of death for teenage girls

"Most women have many children in order to stay married – because they don’t want their husbands to leave them."

For all his work to improve maternal health, the 'bottom line' for Dr. Zulu is that too many women continue to face complications in pregnancy for which adequate medical care is still not accessible. One issue, he said, is the high number of adolescents giving birth — 151 per 1,000 women aged 15-19. Pregnancy and childbirth is the leading cause of death for girls of this age in most low- and middle-income countries.

But another issue is the number of pregnancies Zambian women experience. Although the average family size is declining (Zambia's total fertility rate in 2011 was 6.3, down from 7.5 in 2007) fertility rates are about 25 per cent higher in rural compared to urban settings.

While access to family planning may be an issue, many women and their husbands are not receptive to family planning, Dr. Zulu said. "Some women had as many as 15 or 17 pregnancies," he said, adding that every pregnancy increases the lifetime risk that women face of maternal death or disability.

Dr. Zulu believes more needs to be done to educate the population about the benefits of family planning. "There are taboos and myths and most women in the rural areas feel it is up to God to decide how many children they should have," he says. "There are women who really don't want anything to do with family planning, and their husbands are worse. They're the ones who actually put those ideas in the heads of their wives."

Although the study of Zambia's progress in reproductive health care was based on secondary research, it does point to a cluster of leading practices and enabling factors that UNFPA supports in many contexts. They suggest that despite being a low-income country with high HIV prevalence, Zambia has been able to advance its reproductive health equity through a combined effort to serve rural areas, integrate health services, and enhance outreach and partnerships with community-based organizations. 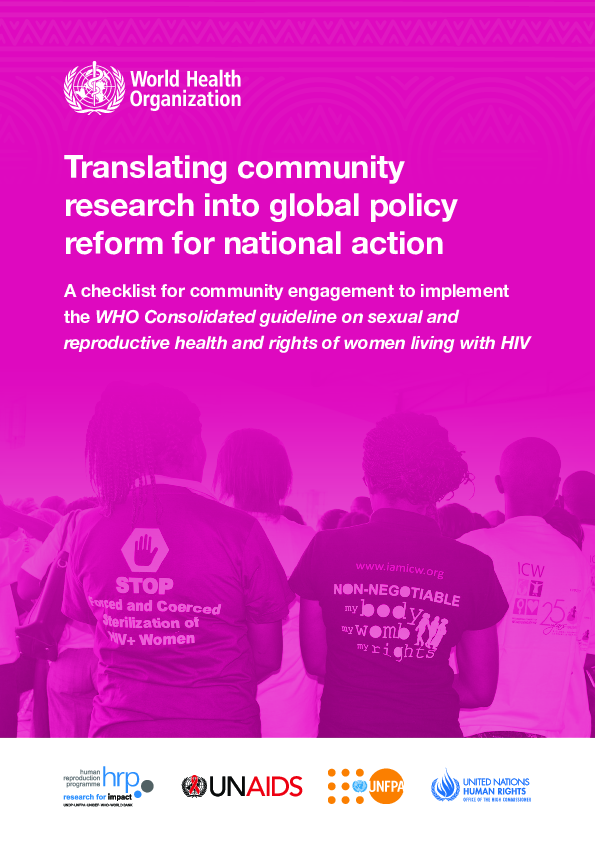