Protecting women and girls after the earthquake in Papua New Guinea

She and her family emerged unscathed, but their home, like many others near the earthquake’s epicentre, was severely damaged.

A landslide contaminated their sole nearby source of safe drinking water. The earthquake’s aftermath brought strong aftershocks, while newly impassable roads and disruption of vital services made it hard for Julian to provide for her two young children.

February’s earthquake, perhaps one of the most under-reported natural catastrophes so far this year, has affected over half a million people, with over 270,000 still in need of vital aid as of April 2018.

Even in the best of times, inadequate infrastructure makes many parts of this impoverished country hard to access, and the number of health facilities is insufficient to meet the population’s needs.

Since the earthquake, landslides and sporadic unrest in some areas have made delivering aid even harder. Meanwhile, many critical health stations are out of commission.

Birth and death in the aftermath

For Julian, the effects of the earthquake and its aftermath compounded the challenges of a difficult birth.

“When my contractions started,” she recalls, “the local nurse told me she couldn’t help, and sent me off to Pimaga hospital to give birth.” This larger facility had already received safe birthing kits from UNFPA.

Early the next morning, after Julian had laboured for hours, midwives discovered that her baby had hydrocephalus. The baby died, and Julian’s life was in serious jeopardy. 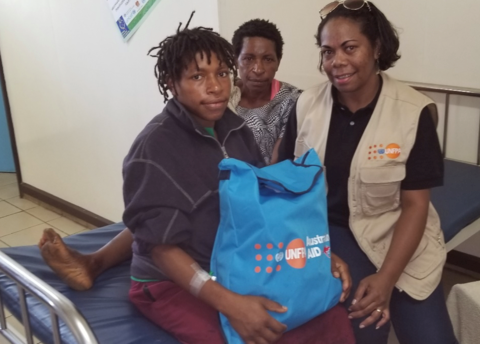 But thanks to a swift referral made by a midwife from Papua New Guinea’s Family Health Association and a reproductive health officer from UNFPA, Julian was quickly airlifted to the larger, better-equipped Mendi provincial hospital, where her life was saved.

Julian was one of approximately 3,200 pregnant women caught up in the disaster who, along with an estimated 35,000 earthquake-affected women of reproductive age, were targeted by UNFPA as part of the government-led joint international and United Nations emergency response.

With support from Australia, the government has distributed around 700 of UNFPA’s dignity kits – containing vital health, hygiene and safety products to meet the needs of women and girls – in the worst-hit areas. Many kits were dispatched quickly through a joint Asia-Pacific pre-positioning initiative between the government of Australia and UNFPA. Another 500 kits are now pre-positioned in the hard-hit province of Hela.

Other UNFPA efforts target violence against women, which often spikes in emergencies.

Working with government and partners, such as the International Planned Parenthood Federation, UN Women and UNICEF, UNFPA is working to establish five women-friendly spaces in earthquake-affected areas, where women and girls can seek services for gender-based violence and receive counseling, awareness and support for referral services.

Julian, meanwhile, is now safe, recovering and looking to the future.

“I’m happy to be alive,” she says. “I’m looking forward to getting back to my husband and children at home so we can get on with rebuilding our house and our gardens.”