RIOBAMBA, Ecuador — When fifteen-year-old Maria Victoria Urquizo tends to the potato field in front of her brother’s house in the indigenous community of Guanilchig, she has a stunning view of the majestic, snow-capped Chimborazo—Ecuador’s highest mountain. At 3,500 meters (about 11,500 feet) above sea level, the morning air in this Western range of the Andes is crisp.

The sunlight reflects the bright colours of the traditional indigenous textiles Maria wears, but the story she tells is dark. One September day, when she was just 14 years old, she was raped by an acquaintance who worked alongside her in the field. “I had met him only once before,” she recalls. Two months after the attack, she realized she was pregnant. “I was afraid of going to the police. I only wanted to cry,” she said. On June 28, she gave birth to a girl.

Now, she lives with her brother and his family and combines working in the field with caring for her infant daughter who still hasn’t been given a name. Sometimes Maria’s sister in-law or her nieces will help carry the unnamed child.

“We estimate that every day, two adolescents become pregnant [in this province],” said Rosa Elena Lara who is responsible for the Ecuadorean government’s adolescent pregnancy prevention programme in the Chimborazo province—a mountainous area that is home to nearly half a million people. “But there is terrible under-reporting of sexual abuse,” she adds.

But teen pregnancy does not necessarily fit a specific stereotype and is certainly not only a rural phenomenon. 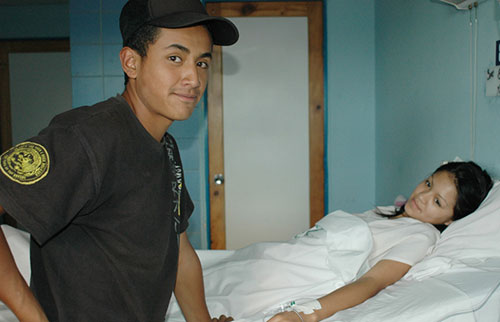 Erika Mora, a 16-year-old from Quito, learned that she was pregnant when she began bleeding after a fall. Photo: Trygve Olfarnes/UNFPA

Erika Mora, a 16-year-old from Quito, discovered that she was pregnant when she started bleeding after a fall. “My stomach hurt and there was blood,” she said. Her boyfriend Ricardo (18) helped her get to a nearby hospital where her pregnancy was terminated. The foetus had been damaged in the fall, and doctors told her there was no alternative.

The couple had been using condoms, but only occasionally, when having sex, even though they realized that Erika could become pregnant. “We just didn’t think it would happen to us,” said Erika. Although the couple had decided to quit school and start working to provide for themselves and their baby, they are now set on continuing their studies and waiting until they are older to start a family. “It’s no joke bringing a child into the world,” said Ricardo.

Gioconda Gavilanes, national leader of the Ecuadorean programme for teenagers of the Ministry of Health explained that the high-risk groups for teenage pregnancy are often rural and poor, but that young people in large cities like Quito and Guyaquil are at equally high risk. She said a serious obstacle to preventing teen pregnancies is the lack of access to condoms and other family planning methods.

UNFPA, the United Nations Population Fund, is supporting the Ministry in establishing a nationwide network of reproductive health and information services designated especially for adolescents and young people. These services have their own, private waiting rooms and strive towards having an ambiance that is welcoming and accepting of young people in other ways as well. 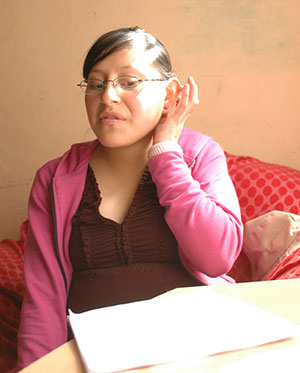 Paola (19)  plans to finish her education in nursing and make a life for herself and her new baby. Photo: Trygve Olfarnes/UNFPA

Paola, a pregnant 19-year-old who is studying to become a nurse, said she knew about the importance of using contraceptives, but was too embarrassed to go to the clinic and ask for them. Her boyfriend, who turned out to have a family already, reassured her that there was no need to worry about becoming pregnant, because “he knew what he was doing”. In spite of everything, Paola is determined to finish her education and start making a life for herself and her unborn child.

Elizabeth Granda, an obstetrician who works at a small clinic outside of Riobamba, said teenagers often do not seek family planning services at regular hospitals and clinics because they are afraid of gossip. “I have been here for two years, and I can only recall two cases where young girls came to ask for contraceptives,” she said. “In some cases girls as young as 15 are forced to get married if they become pregnant,” she said.

The health service also provides information about reproductive health to teenagers through schools in the community. “The level of knowledge is very low. Another obstacle is the ‘machismo’,” said Granda. “Women have to ask their husbands or partners for permission in order to use contraceptives.” She adds that health personnel themselves sometimes represent an obstacle. “We are not trained to deal with teenagers.”

According to the Economic Commission of Latin America and the Caribbean, 18 per cent of children born in the region have teenage mothers. Having children at a young age exposes girls to greater health risks and often keeps them from continuing their education. According to research, girls under 15 who become pregnant are five times more likely to die from causes related to pregnancy or childbirth than those at 20 years of age. This year’s Millennium Development Goal report issued by the United Nations, states that “progress has stalled in reducing the number of teenage pregnancies, putting more young mothers at risk.”

At the regional level, UNFPA, with funding from the Spanish government and other donors, is providing support to prevent teenage pregnancies in a number of countries. Prevention efforts include peer education programmes, the establishment of reproductive health services for young people, training of health personnel, as well as provision of family planning methods and encouraging young people to ensure that their needs become part of the political agenda.