Preventing and Treating Fistula in Chad

N’DJAMENA, Chad—Four years ago, Jamia Kalaroun lost her baby. After labouring unsuccessfully at home for more than four days, she gave birth to a stillborn infant and suffered a devastating fistula injury. Her first husband abandoned her.

Obstetric fistula usually occurs after several days of obstructed labour without timely medical intervention – typically a Caesarean section – to relieve the pressure. The baby’s head compresses the mother’s pelvic tissue, and a hole forms between her vagina and her bladder or rectum. The women are left with chronic incontinence, unable to control the flow of urine or faeces, and are often rejected by their families and communities. 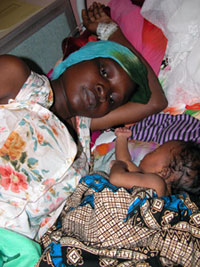 But this spring, Jamia gave birth to a healthy baby after a successful Caesarean delivery at the Hôpital de la Liberté here, where she had previously undergone surgery to have her fistula repaired. “Now I am so happy, because I have a baby who lives,” said Jamia, cuddling the newborn nestled on the bed beside her when she met with Thoraya Ahmed Obaid, the Executive Director of UNFPA, the United Nations Population Fund.

“It is high time that something is being done for women with fistula,” said Ms. Obaid after visiting patients at the hospital, which UNFPA supports. “What shocked me was that many of these women had more than one fistula and had been operated on multiple times. We must develop the capacity of medical staff at various levels to ensure quality delivery of health services and teach these women and their families how to prevent fistula from occurring again and again.” 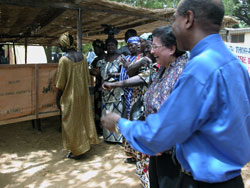 This French-speaking nation of 9.3 million is one of the poorest in the world, ranking 173 out of 177 countries in UNDP’s 2005 Human Development Index. Chadian women have on average 6.65 children and a maternal morality ratio of 827 per 100,000 live births. Only 16 per cent of women give birth with a skilled birth attendant. There are just 18 obstetricians in the entire country, including four United Nations Volunteers sponsored by UNFPA.

Preventing future fistula cases and repairing the bodies of women who suffer from fistula is an essential component in improving maternal health, which is Goal 5 of the Millennium Development Goals. A target related to this goal calls for a three-fourths reduction in maternal mortality ratios by 2015. Maternal mortality could be significantly reduced if more women were supported in their deliveries by skilled birth attendants and had access to emergency obstetric care.

“It’s a big public health problem,” said Dr. Mahamat Koyalta, head of the Maternity Ward at Hôpital de la Liberté and a fistula surgeon trained at the Addis Ababa Fistula Hospital in Ethiopia. “There are multiple reasons: early marriage, an inadequate health system, and not enough doctors to treat fistula patients. Most importantly, a woman has to wait for her husband’s or another man’s permission before she can go to the hospital.”

The Government of Chad is making the treatment and prevention of fistula a priority. In 2003 it approved a National Strategy to End Fistula. In Ouaddaï, an annual mobile treatment mission has been undertaken to perform fistula repairs. Two doctors perform the surgery; several midwives and nurses provide pre- and post-operative care.

A team from the Addis Ababa Fistula Hospital attended the first mission, but the last two were staffed entirely by Chadian professionals. The three missions to date have treated 213 women.

Most of these rural patients were younger than 17 and lacked financial means to seek treatment at hospitals in the capital. Some travelled more than 1,000 kilometres, often on the back of a donkey. Many families had to sacrifice to pay for their transport.

Earlier this year, the Office of the UN High Commissioner for Refugees and UNFPA jointly supported a medical team at Abéché Hospital to perform reconstructive surgery on Sudanese refugees who suffered from fistula as a result of early childbirth, delivery under unclean conditions or rape. More than 20 women from Darfur had their fistulas repaired.

“These missions are an essential component in our effort to end fistula by reaching women who would never have access to treatment otherwise,” said Dr. Yacine Diallo, UNFPA Representative in Chad. “Expanding the capacity of fistula surgeons in the country will allow the treatment of many patients relatively quickly and facilitate the formation of new fistula repair teams.”

" There are multiple reasons: early marriage, an inadequate health system, and not enough doctors to treat fistula patients. Most importantly, a woman has to wait for her husband’s or another man’s permission before she can go to the hospital. "

La Radio Rurale has launched an extensive awareness campaign in local languages to make the public aware that treatment is available, to end the stigma associated with fistula, and to air testimonials from former fistula patients. Traditional leaders have been mobilized to tell communities that fistula can be cured and that free treatment is available at Abéché each year during a specified period.

“To prevent fistula, we need to ensure that emergency obstetric care is available to all women,” Ms. Obaid said. “While surgery is necessary to repair fistula, we must also develop the skills of these women to help them integrate back into their communities.”

Dr. Koyalta agrees on the need for a multi-pronged approach that includes surgical repair, education about the causes of fistula, promotion of birth spacing and family planning, and community sensitization.

“The women blame themselves. Many believe it is a curse from God,” he said. “We must give dignity back to fistula patients. They need not be ashamed, and we can help them start a new life.”

In 2003, UNFPA and several partners launched the first-ever global Campaign to End Fistula. Active in 30 countries in sub-Saharan Africa, South Asia and the Arab States, the campaign works to prevent fistula from occurring, and to treat women like Jamia who suffer from the condition, renewing their hopes and dreams. For more information, visit www.endfistula.org.

Preventing and Treating Fistula in Chad