GONDAR, Ethiopia – “When you think about your future, you never plan to be uprooted from the comfort of your home and find fragile safety in a tent,” said 24-year-old Hiwot* from Ethiopia’s embattled Tigray Region.

Yet this is exactly where she found herself in early December, while she was seven months pregnant. Fighting intensified around her neighbourhood, forcing her and her husband to flee.

“As fighting came close to our house, my safety and that of my baby became my utmost priority. We had no choice but to run for our lives,” she described to UNFPA.

Hiwot's journey was long and dangerous: “We had to travel from Shire in the Tigray Region to Dabat in Amhara Region. It took us three full travel days to reach our destination. We were first on foot, but then, I became so tired that we took the risk and hitchhiked.”

Throughout, her main concern was safeguarding her pregnancy: “I was afraid that I’d fall sick, there would be no one to help me on the way, and I would lose my baby.”

Before the conflict in Tigray erupted in November, things were looking good for Hiwot and her family. She made an income as a chef, something she greatly enjoyed. And about eight months ago, she found out that she was pregnant with her first child.

“My husband and I were thrilled. We were finally going to have a baby, and we were going to pamper him or her. We started planning for the child’s future.”

Those plans have been abandoned.

“I had to leave everything behind—my belongings, my jewellery, and my livelihood that gave me some independence and strength: my cooking set. I only managed to bring with me two dresses and some underwear, as well as the little money we had kept at home,” she said.

Three days of walking and hitchhiking brought them to Dabat, in Gondar, where aid groups have established a site for internally displaced people . There are currently 630 households, around 1,870 individuals, staying in the Dabat displacement site. Of them, 490 are estimated to be women and girls of reproductive age.

Hiwot and her husband share a tent with their neighbours from Tigray.

Today, the fighting in Tigray is ongoing, and access to humanitarian aid is limited and conditions are deteriorating, United Nations agencies report. In Amhara Region, tens of thousands of people are targeted for assistance.

Displacement and uncertainty have already taken a serious toll on Hiwot. “We are desperate now,” she said. “Both my husband and I are unemployed and have become reliant on others. We are not sure what we will do when the baby arrives next month.”

Where to give birth and under what conditions are major concerns.

She is not alone in this. There are an estimated 36 pregnant women in the Dabat displacement site, all in need of reproductive health care as well as other support, including psychosocial services.

UNFPA is working to urgently provide this care. In close collaboration with the Gondar City Administration Health Office, UNFPA is hiring midwives for the health centres serving the women and girls at the Dabat site. UNFPA is also distributing reproductive health kits to birth attendants, which will ensure midwives on-call have the supplies needed for safe deliveries.

Women who are six months or further along in their pregnancies will also receive clean delivery kits, which contain emergency supplies—including a sterile sheet, gloves and razor—to help them deliver whether at the displacement site or in the health centre.

UNFPA will also establish a women’s safe space and a child-friendly space where women and children can seek mental health and psychosocial support and receive important information. These services are critical for those, like Hiwot, struggling to come to terms with their new reality.

“I have nightmares,” she told UNFPA, tearing up, “about how will I keep the baby alive with no income and living in such difficult conditions.” 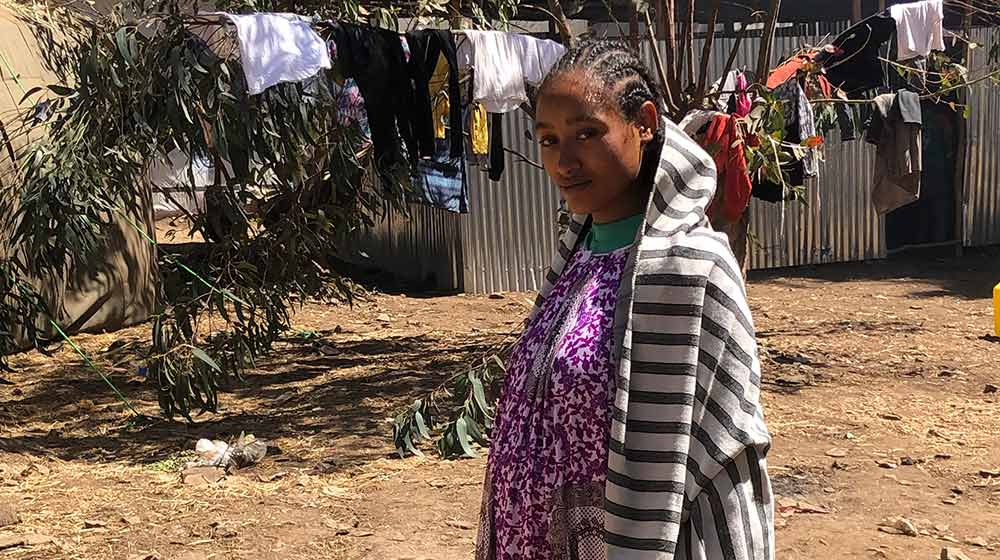