The power of girls: African athletes call for gender equality, support for girls

BRAZZAVILLE, Congo – “We are tired of hearing our parents telling us how, back in their days, young girls were married already at the age of 13,” said Marcelle, 19. “What is important today is to get an education and be successful in life.” Marcelle knows what it means to fight for success; she is an elite athlete who represented the Congo at this year’s All African Games.

Sunday, 11 October, is the International Day of the Girl Child, which this year celebrates the “power of the adolescent girl.”

The strength, power and potential of girls were unmistakable at the All African Games, held in Brazzaville last month, where many young female athletes were determined not only to win medals but also to advance the rights and well-being of girls everywhere. 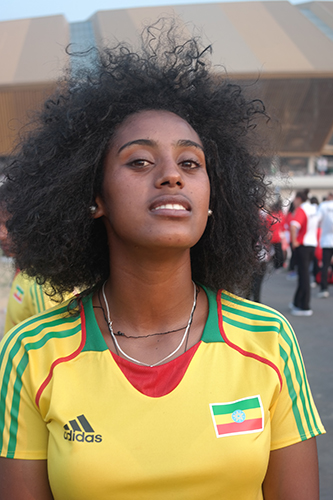 Around the world, adolescent girls face steep challenges, including entrenched discrimination, lack of access to education, and barriers to sexual and reproductive health information and care. Harmful practices such as child marriage and female genital mutilation persist, despite international condemnation.

But when girls’ rights are upheld, and when they are empowered to learn, maintain their health and reach their full potential, the benefits to society are enormous.

It is a message many of the athletes echoed.

Ethiopian tennis player Dinknesh Tamiru called for increased support for women and girls. “As women, young African women in particular, we need all the support we can get, because we carry a double load and that can sometimes be very challenging,” she said.

“I would like to encourage all young women throughout Africa to use their energy on the right things. That way we can reach our goals and together create a better world.”

Over 8,000 elite athletes from 54 countries came together at the Games. Many of them also worked with UNFPA to promote better sexual and reproductive health.

Girls are often not empowered to protect their health. For example, many feel unable to negotiate condom use. UNFPA, with the National AIDS Control Committee, the Congolese Association for Family Well-Being, and others, worked to raise awareness of the importance of condoms to prevent sexually transmitted diseases (STDs).

Over 200 volunteers were deployed to dispense information about safe sex in the sports arenas and Olympic villages, reaching over 172,000 people. More than 555,000 condoms were handed out, in collaboration with the UNFPA-supported CONDOMIZE! campaign.

Della, a 21-year-old Kenyan table tennis player, advocated abstinence and condom use. “For me, the best way to reduce HIV and STDs is to abstain,” she said, adding that, “in the case that one is unable to do so, condoms are the only way forward. Therefore, it is good that people gain access to condoms and learn how to use them so that the rate of HIV and AIDS can be reduced.” 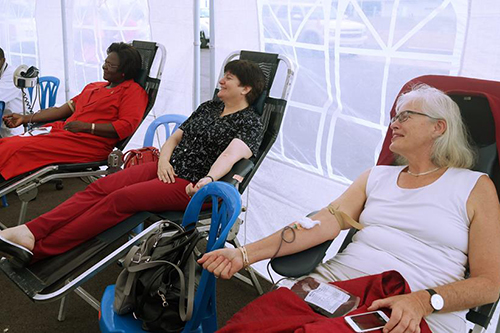 The ambassadors from Chad, the US and the European Union participate in the UNFPA-supported blood donation drive. © UNFPA Congo

Many of the athletes, as well as high-profile visitors and dignitaries, also participated in a blood donation drive supported by UNFPA, the National Blood Transfusion Centre and the Congolese Red Cross.

The event was organized to help tackle maternal mortality. Globally, haemorrhage is one of the five leading causes of preventable maternal death. But blood donations often fail to reach the level needed to meet the needs of the Congolese health system.

The Congolese National Gymnastics team showed their support by donating blood at the drive. Gilbert Moungondo, a Congolese bronze medallist in aerobic gymnastics, encouraged young people around Africa to follow his example.

National and international female leaders also came out to support the drive, including the ambassadors from Chad, the European Union and the United States

“I thought that since the people who are destined to have the blood are the women of Congo, who die too often [from] haemorrhaging after childbirth, it would be a good idea to support this effort,” said Stephanie Sullivan, the United States ambassador.