KABUL, AFGHANISTAN -- “When we asked for help in reconstructing an office for our ministry, UNFPA really acted quickly,” says Dr. Sima Samar, Minster for Women’s Affairs in Afghanistan’s interim administration. 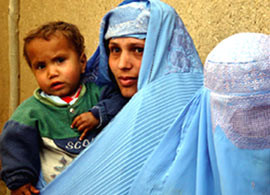 A staggering lack of health care, education and opportunities for women are high among the many daunting challenges confronting a country in ruins after two decades of war and still facing uncertain prospects for peace and security. The United Nations Population Fund (UNFPA), part of the integrated UN assistance mission here, is moving as fast as conditions allow to improve women’s health and social standing.

In early March, several UNFPA-chartered Antonov cargo jets loaded with medical equipment, ambulances and supplies urgently needed by three Kabul maternity hospitals are due to arrive here from Copenhagen. The Population Fund is organizing the airlift and planning to renovate two of the hospitals with assistance from international donors.

The planes will also carry equipment for Dr. Samar’s new office, which UNFPA is setting up for her in a devastated downtown complex. A dozen workers with handheld tools are rebuilding the structure from the foundation up.

Next door, scores more are hurriedly painting classroom walls and fixing floors in a women’s vocational school scheduled to reopen on 22 March. The school, which includes childcare facilities, was closed and wrecked by the Taliban. The Population Fund’s support is aimed at helping vulnerable women, especially those most exposed to poverty and abuse including widows and heads of households.

In the meantime, the Population Fund continues to provide medical supplies and midwifery training as it has since 1998 to nongovernmental agencies offering mother and child health services in dozens of urban clinics around the country. Outside the cities, traditional birth attendants trained with UNFPA support are assisting deliveries and, whenever possible, referring cases with complications to the clinics or maternity hospitals.

Lifesaving assistance of this kind, however, remains beyond the reach of the vast majority of Afghan women. Only 12 per cent of women have access to maternal and emergency obstetric care, and reproductive health care is completely unavailable in two thirds of the country’s provinces. Just 2 per cent of married women use contraceptives.

Frequent, high-risk pregnancies combined with malnutrition create a deadly situation for mothers and their children. Afghanistan’s maternal mortality rate is estimated to be 1,700 deaths per 100,000 live births, the world’s second highest. Some 16,000 women will die of mostly preventable pregnancy-related causes this year. Infant and under-5 mortality are correspondingly high: 165 of every 1,000 babies born will die before their first birthday; one child in four will not survive to age 5. 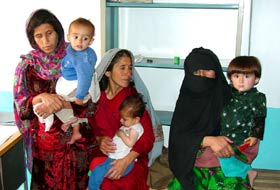 Prospects for extending reproductive health care to women in the Afghan countryside are limited by continued political and military instability, a lack of resources and a severe shortage of trained female health workers.

“Last week I was visited by a group of white-bearded elders from a remote rural area,” Dr. Samar recalls. The men came to beg the interim administration to build a health facility where none exists. “They were actually crying as they told me about a woman who went insane after seven days in labour. She died two days later.”

Improving the reproductive health care available to Afghanistan’s women will be the Population Fund’s priority as it contributes to the country’s reconstruction process in the months ahead. UNFPA will also support community activities to assist the most vulnerable women and youth, help strengthen the national statistics and data system and continue to aid Afghan refugees in neighbouring countries.

"I think UNFPA can do a lot of things if they fund our projects," says Dr. Samar. "Establishing family planning and reproductive health clinics in every district would be a great help. We have to train a lot of midwives to send to different areas. It's not easy work, and it will take time, but if we have money, we can achieve it."