PALO ALTO, California — Two interactive dashboards, created for UNFPA with business analytics technology from SAP AG and data from the United Nations Population Division and other international sources, have been launched as part of the 7 Billion Actions campaign.

The aim of the dashboards, released on the first day of the “7-Day Countdown to 7 Billion", is to engage viewers in the demographic trends that are shaping our world. They can be used by policymakers, researchers, non-governmental organizations and UN staff to better understand the implications of population dynamics. 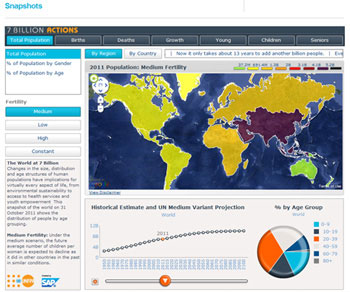 The 'snapshots' interactive dashboard reveals many demographic dimensions of a world of 7 billion.

One of the population dashboards provides an enriched ‘snapshot’ of world population as it passes the 7 billion threshold – with data disaggregated by regions, countries, age groups, births and deaths, along with different population projections (low, medium, high and ‘constant fertility’ variants) up until 2100. Bar graphs show the how the age structures of different countries and regions compare, and pie charts show percentages of different age groups.

A second dashboard visualizes the way that different social, economic and demographic variables -- such as fertility, educational enrolment, income and dependency ratios – correlate and change over time. Both dashboards allow viewers to access the visualizations instantly on a laptop or mobile device anywhere in the world.

“The milestone of 7 billion is a challenge, opportunity and a call to action to ensure that everyone can enjoy equal rights and dignity,” said UNFPA Executive Director Dr. Babatunde Osotimehin. “Private sector partners like SAP can play a critical role, together with civil society, academia, governments and the United Nations system, to accelerate progress especially for women and girls in the developing world.”

Together with the Churchill Club, SAP and UNFPA presented the population dashboards at an executive roundtable, titled Innovating for a World of 7 Billion. Following the roundtable discussion, teams of SAP employees, along with representatives from other Silicon Valley technology companies, universities and non-profit organizations, collaborated to find solutions that will enable youth in the least developed countries to enjoy greater access to secondary education, thereby empowering them to generate lasting economic benefit to themselves and their societies.

“The world’s population reaching 7 billion people presents an excellent opportunity for technology to play an active role in the global commitment for a healthy and sustainable world,” said Steve Lucas, general manager, Business Analytics and Technology, SAP. “We delivered dashboards that will help the organization build global awareness around the opportunities and challenges associated with a population of 7 billion people.”

Individuals and organizations can engage with the 7 Billion Actions campaign on Facebook.