UNITED NATIONS, New York – Hundreds of parliamentarians, dignitaries and policymakers from around the world gathered in Stockholm, Sweden, from 23 to 25 April to reaffirm their support for women’s and adolescents’ human rights, particularly their reproductive rights.

Taking place 20 years after the International Conference on Population and Development (ICPD), the Stockholm event – the 6th International Parliamentarians’ Conference on the Implementation of the ICPD Programme of Action – focused attention on the links between population issues and sustainable development.

In particular, attendees highlighted the importance of protecting the rights of women and adolescents, and of providing comprehensive sexuality education and reproductive health services, to promote economic growth and social development.

At the start of the meeting, Dr. Babatunde Osotimehin, Executive Director of UNFPA, the United Nations Population Fund, emphasized how violations of girls’ and women’s rights undermine both their own potential and that of their communities. 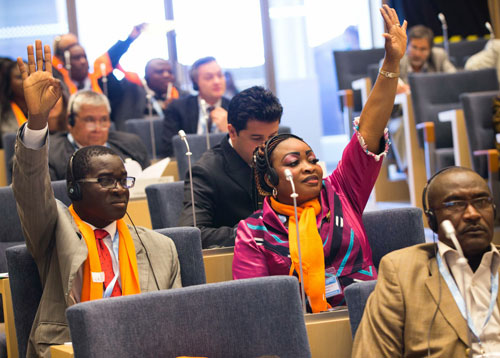 There is a correlation between girls’ rights, the health of their future families and the economic success of their countries, according to the ICPD Global Review Report, released earlier this year.

Hillevi Engström, Swedish Minister for International Development Cooperation, underscored this point. “Effective sexual and reproductive healthcare is of enormous importance for women... And it benefits the economy,” she said.

But the persistence of child marriage, female genital mutilation/cutting, adolescent pregnancy, gender-based violence and discrimination shows that these issues have not been regarded as priorities, participants argued.

The attendees pledged to push for change.

“We are concerned that despite the gains made in the past 20 years, these gains have not been experienced equally by all, and that a considerable number of people continue to live in conditions of extreme poverty, without the fulfilment of their human rights and fundamental freedoms,” the Statement of Commitment says.

The attendees also agreed to “promulgate where absent and advocate for enforcement of laws to prevent and punish hate crimes without distinction of any kind, and take active steps to protect all persons from discrimination, stigmatization and violence.”

The three-day event was organized by UNFPA and the European Parliamentary Forum on Population and Development, together with the Swedish Parliament, the Swedish All-Party Parliamentary Group on Sexual and Reproductive Health and Rights and the Swedish Ministry of Foreign Affairs.