AL HUDAYAH, Yemen – Fatima Mujawash once had a very different life. She was well educated, with a diploma in clinical laboratory science, and happily married with three children.

Everything changed when Yemen’s conflict erupted. Her husband was struck and killed by an explosive projectile when violence engulfed their home district, Al Khokah, in Al Hudaydah Governorate. Her father’s family decided to flee.

One year after her husband’s death, Ms. Mujawash made the painful decision to leave, as well. “I had no one to back me up or support me to alleviate my pain and grief,” she explained.

Without any means of transport, she and her kids – aged 7, 12 and 15 – set out on foot, leaving nearly everything behind.

Fleeing both war and disease

By that point, the COVID-19 pandemic had erupted, and Ms. Mujawash feared her family could be exposed if they sought refuge in a crowded city.

She decided to go instead to Tuhama, a countryside area on the outskirts of Zabid, where there was a displacement camp not far from the village where her sister lived.

They trudged for three hours in the desert heat, “under the hot blazing sun and over the burning sand,” she recalled. Finally, they arrived at a road where they were able to flag down a car for a ride.

Struck down by COVID-19

Ms. Mujawash’s hope that a rural destination would protect her family from the pandemic was soon dashed. Not long after arriving at the displacement camp, she fell ill with COVID-19.

She was admitted to Zabid’s quarantine hospital. There, she was in isolation, struggling for air. “I felt so lonely and dark,” she said. “I was finding it difficult with every breath I took.”

“You have to find the strength to get better,” one of the medical staff told her. “Think of people who give you strength.”

Ms. Mujawash thought of her kids. They were her motivation to recover.

“I was struggling to save my life to go back to my children,” she said.

Finally, at the end of March, she recovered enough to be discharged. She returned to the displacement camp and was reunited with her children.

She has sought out medical counselling at the Zabid Hospital, which is supported by UNFPA. In addition to receiving treatment for COVID-19, she was also able to receive reproductive health services, and her son has been able to access treatment for his sickle cell anemia.

This year, UNFPA is supporting 105 health facilities across Yemen. More than half a million women and girls have been reached with life-saving reproductive health services within the last six months, care that has been supported by the European Union, KSRelief, Qatar, the Republic of Korea, and the UN Central Emergency Relief Fund.

But the operating environment remains severely challenging. UNFPA, through its partners, is the sole provider of essential life-saving reproductive health medicines in Yemen. To keep reaching the most vulnerable women and girls, UNFPA requires $100 million in 2021. To date, only 30 per cent of this funding appeal has been received.

As for Ms. Mujawash, she has not yet been able to find work, but her family has been getting by on emergency relief distributed in the camp. She is determined to hold onto the strength she summoned in the hospital, and is even allowing herself to imagine a better future.

“The displacement and the pandemic have changed my life,” she said. “They made me strong. I did things no one could imagine or endure. But I still dream of going back home with my kids. I hope, one day, the pandemic and war will perish from my country.” 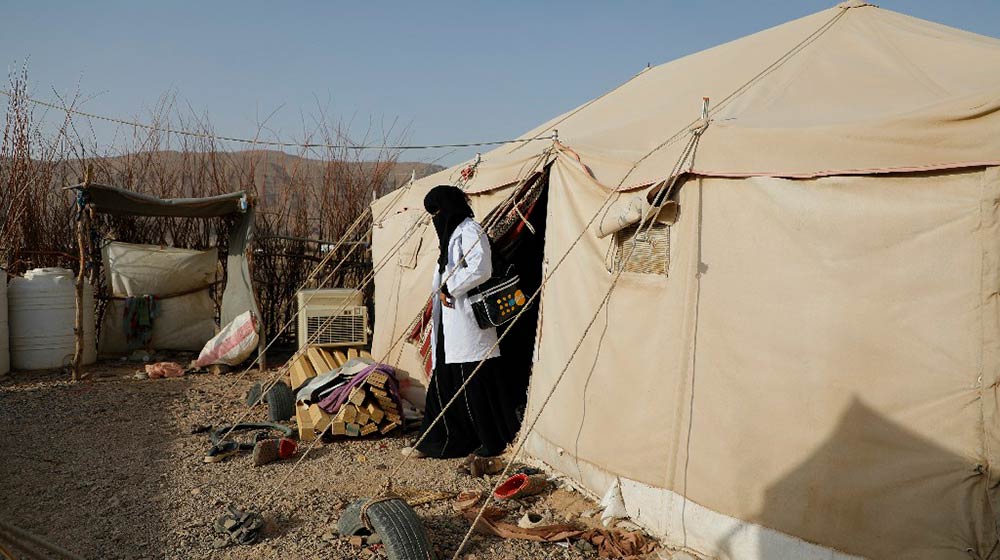