PORT-AU-PRINCE—Six days after the devastating earthquake that hit Haiti, hospitals in the capital, Port-au-Prince, are flooded with victims, many of them with crushed limbs or fractured bones. But another kind of emergency, perhaps less visible but equally deadly, can occur when pregnant women are forced to give birth in unsanitary conditions and without access to medical care.

Giving birth under such conditions can quickly turn deadly if complications such as bleeding, obstructed delivery or high blood pressure occur. Everyday hygiene supplies, including sanitary napkins and soap, are also necessary, but often forgotten in emergencies.

As hospitals struggle to meet the needs of the thousands of wounded, maternity wards have in some cases given way to surgeries and orthopaedic treatment because of the overwhelming number of serious injuries.

The Hopitale Generale, near the city’s centre, and the maternity clinic, Maternite Isaie Gentil, are expected to reopen their maternity wards on Monday, 18 January. 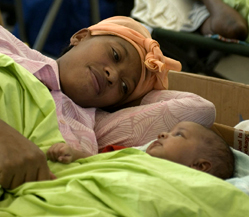 Dr. Alex Lasegue, the Director of Hopitale Generale, said that doctors at his hospital had performed two Caesarean sections and assisted two regular deliveries on a park bench outside the hospital on Saturday.

“The water broke, and we had nowhere else to do the deliveries,” he said.

There are more than 60 sites around Port-au-Prince where large groups of people who have lost their homes are camping out in makeshift tents made from sheets and sticks. UNFPA, the United Nations Population Fund, estimates that about 63,000 women among the affected population are pregnant and in need of maternal health services.

UNFPA has been on the ground in Haiti for 30 years and now forms a critical part of the United Nations team assisting the affected population.

Safe delivery equipment and dignity-kits containing sanitary napkins, soap and other personal hygiene articles have been delivered and more are on the way—a small but important step on the long way back to a semblance of normalcy in this devastated city.