UNITED NATIONS, New York – An online course for humanitarians is raising new awareness about women’s needs and vulnerabilities in emergency-affected communities around the world.

“It acted as an eye opener, and it made me realize that gender-based violence can happen to anybody,” said Rebecca Oketch of Fortress of Hope, a girls’ rights organization in Kenya.  “Now I treat survivors with dignity and respect rather than victim-blaming.”

The free UNFPA course, Managing Gender-Based Violence in Emergencies, helps humanitarian workers understand the risks women and girls face in crisis settings. It also encourages better support for survivors of violence and helps to prevent violence from happening in the first place.

The programme was re-released yesterday in a mobile- and tablet-friendly format, which will extend access to users without a computer.

Originally launched in 2011, the course has directly reached thousands of people – including not only aid workers but also women’s rights advocates, social workers, counsellors, teachers, legal specialists and media personnel.

Many have gone on to train others, expanding the programme’s reach. Since taking the course, for example, Ms. Oketch has shared these lessons not only with youth leaders and activists but also with other trainers in her community.

Participants say taking the course has resulted in real-world changes to their work and advocacy. 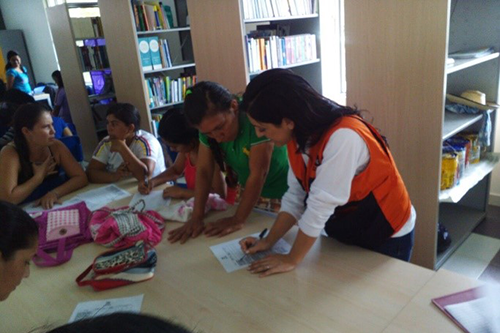 “Although I have been involved in fighting gender-based violence for many years, I was not aware of many things until I took this course,” said Ndume Eliya Nduelib of the local organization SAFEKA, based in the Democratic Republic of the Congo.

“I have learned of the survivor-centred approach, which requires that any assistance plan or action be taken with the survivor’s consent and in compliance with four guiding principles: safety, confidentiality, respect and non-discrimination,” he said.

“Right now, I would not judge even a sex worker or a woman sticking in an abusive relationship because I realize now their suffering and the psychological consequences of gender-based violence,” noted Judith Kibuye, a women’s rights advocate in Kenya.

“I also know what to do when I encounter someone who has been sexually abused and the importance of clinical management of rape,” she added.

The course is helping humanitarian workers minimize dangers for women and girls.

For example, women often face a heightened risk of sexual violence while traveling to collect firewood, water or food. Many course participants said they were inspired to reduce the distance women must travel to receive aid in order to lessen their exposure to attack.

Right now, I would not judge even a sex worker or a woman sticking in an abusive relationship because I realize now their suffering and the psychological consequences of gender-based violence.

“For our in-camp food distributions, I was able to advocate for a mobile distribution mechanism rather than centralized distributions, decreasing the distance [required to travel] to receive food for female-headed households,” said Karla Jordan, who works with Samaritan’s Purse in Northern Iraq.

In reception centres for Burundian refugees in Uganda, charcoal briquettes were distributed to women to “reduce their exposure to potential risks such as physical and sexual abuse or exploitation while in search for fuel sources for cooking,” said Hariette Adong of UNFPA. 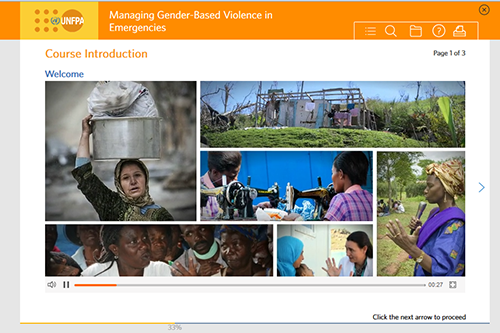 The course has been re-launched in mobile- and tablet-friendly format, making it accessible to users without a computer.

Ending the culture of silence

The course has been endorsed by the Gender-Based Violence Area of Responsibility, an international forum for organizations working to eliminate violence against women and girls in humanitarian settings.

The latest version features a new design and interface to improve access and user experience. It also contains more resources and updated case studies. The upgrade was supported by the United States Bureau of Population, Refugees and Migration.

It is now available in English, and versions in French, Spanish and Arabic are expected to follow in the coming weeks.

Increasing access to this information is a critical step towards ending violence against women, participants say. Ms. Niyongira said she frequently encounters discomfort with even discussing these issues.

“In my country, women seem to be very silent about gender-based violence,” she told UNFPA.

But by tackling the topic head-on, people are becoming aware of women’s needs and rights. “The culture of silence is reduced,” she said.