NIAMEY, Niger/UNITED NATIONS, New York – One year ago, on the night of 14 April, 276 schoolgirls were seized by Boko Haram insurgents in Chibok, a town in north-eastern Nigeria. Since the kidnapping, 57 of those girls have escaped. The fate of the other 219 remains unknown.

While the Chibok kidnapping is one of the highest-profile atrocities carried out by Boko Haram, the group has terrorized countless small towns in the region, and seized many more women and girls.

Nigo,* a 14-year-old girl from Damasak, a Nigerian town near the Niger border, is one of those girls. She was held captive by the insurgents for 45 days until she was able to escape.

Boko Haram attacked Damasak in late November last year. “I was running in the street to seek refuge… Not far from the market, I fell into the hands of Boko Haram,” Nigo told UNFPA.

She and dozens of other girls were taken to a house and forced to put on long black dresses and hijabs covering their whole bodies. “I was devastated. I thought it was over for me” she said. “Even if they do not kill me, I will never see my family again,” she remembers thinking.

The girls were forced to perform domestic chores, including preparing meals for the fighters. And each morning, armed men would come to count the girls. "That's how I understood that we were 44 girls in the house,” Nigo said.

“After each visit, they threw it in our faces that they killed our parents for being disbelievers. They told us that we were their slaves, and they would do to us what they want.”

One day, the insurgents gathered the girls and proclaimed that, from that day forward, they were all married.

“I was afraid, very afraid, because I knew a new life was going to start for me,” Nigo said.

That night, she was raped by a man her father’s age. He would assault her every night.

“I do not even know his name,” Nigo said. “He did not speak to me. I only saw him in the evenings when he came to go to bed with me.”

“Despite the fear, I did not lose hope,” Nigo said. “I always told myself that one day I would escape."

Together with four other girls, she planned to run away.

"One Thursday, around 10 a.m., I fled with four of my friends… We left the house saying we were going to visit some other imprisoned friends.”

As the girls made their way to the edge of town, they realized they were being followed by three men. They ducked into an abandoned house, and hid in one of the rooms.

“They entered the house – I could see through the half-closed window. My legs were shaking,” Nigo said. “One of the men walked to the door of the room where we were. And miraculously, he turned around.”

They waited a few minutes, then again made their way to the outskirts of the town, heading towards Lake Chad. The trip took all day.

The girls were lucky. The men who usually patrolled the lake were absent, and the waters of Lake Chad had receded, allowing them to pass from the Nigerian side of the border into Niger.

Once they had reached the other side, the girls separated. “I went straight to my uncle's, where I found my mother,” Nigo said.

The following morning, her family took her to Agadez, in Niger, where they sought medical assistance from a UNFPA-supported programme for survivors of gender-based violence. Nigo received treatment, including psychosocial counselling.

Today, she lives with her family in Niamey. She is working to move past the abduction, and is concentrating on the future. “I would like to go back to school to continue my studies and become a doctor. Later, I want to help the poor regain their health,” she said.

Still, she holds onto the memory of her hard-won reunion with her family: "I cried in the arms of my mother, who also cried,” Nigo recalled. “Then I saw my brothers and sisters and my father. My whole family was there. My tears dried. I was overjoyed.”

*Name changed to protect her identity 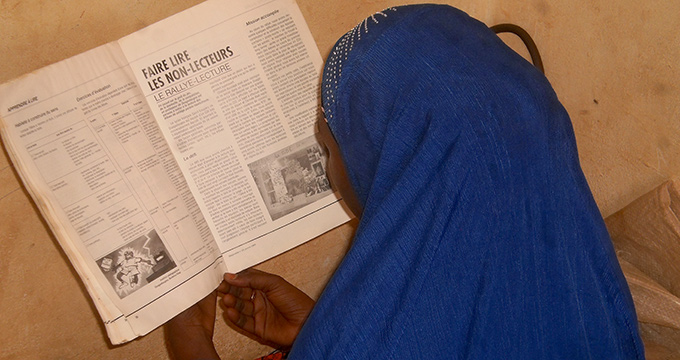