JUBA, South Sudan – Violence against women is epidemic in South Sudan. Ann*, 16, was kidnapped on her way home from school, then raped repeatedly during five days of captivity. Talia*, was battered and tortured for years by her husband, who ultimately threatened to kill her.

Tragically, stories like theirs are all too common in South Sudan. Though comprehensive data are difficult to find, a 2017 survey by the International Rescue Committee and Global Women’s Institute found that some 65 per cent of women, interviewed from three locations in South Sudan, experienced physical or sexual violence in their lifetime.

The ongoing conflict in South Sudan has exacerbated the problem of gender-based violence, with sexual violence used as a weapon of war.

But services to support survivors are often difficult to access. Where available, they are usually provided by an assortment of organizations and institutions.

“Women should get everything they need in one place,” said UNFPA Executive Director Dr. Natalia Kanem during a visit to South Sudan today, where she observed a programme designed to remedy this problem.

Around South Sudan, UNFPA supports programmes to prevent and respond to gender-based violence, including training social workers and health staff to sensitively and professionally meet the needs of violence survivors.

At one facility, the Family Protection Centre, located in the Juba Teaching Hospital, these and other services are integrated together under one roof, helping to ensure survivors receive the full range of care available, including clinical treatment for rape, psychological first aid, counselling, legal support and other services.

“We opened the centre eight months ago, and every day women, young and old, walk into the facility, crying, afraid, depressed, needing someone to talk to, and with high hopes that they have come to the right place,” said social worker Roseline Pita.

The centre, supported with funding from the governments of Canada and Sweden, is already making a difference.

“We have witnessed a transformation from victims to empowered and well-informed survivors,” Ms. Pita said. “After weeks of undergoing counselling and psychosocial support, they come back to the centre and you can barely tell that they were the same women.”

Ann, the kidnapped teenager, was able to receive counselling services from the centre. Because she feared the perpetrators might find her, she was also referred to a safe house run by another organization. She continues to meet with Family Protection Centre social workers and is recovering.

The centre has even helped to secure a couple of speedy prosecutions – a rarity in South Sudan – part of efforts to work with government partners to end impunity for sexual and gender-based violence.

For instance, in addition to receiving medical support, Talia also received legal support from the centre. Her husband is now in prison, and she regularly meets with the centre's social workers.

The one-stop centre model, with integrated medical, psychosocial, legal and support services for survivors, has proved successful at reaching those in need.

“Considering that this facility just opened last November, they have already prosecuted two cases. We need to replicate this example of the one-stop centre, which provides comprehensive services for gender-based violence survivors,” said Dr. Kanem as she toured the centre with United Nations Deputy Secretary-General Amina J. Mohammed.

Since it opened, 366 women, girls, and even boys have visited the centre to receive advice and services.

And centre staff hope to expand the care they provide. “There are other life-saving interventions that we can look at, such as establishing safe houses,” said Ms. Pita. “We also need to provide private wards for young girls who need specialized care and attention.” 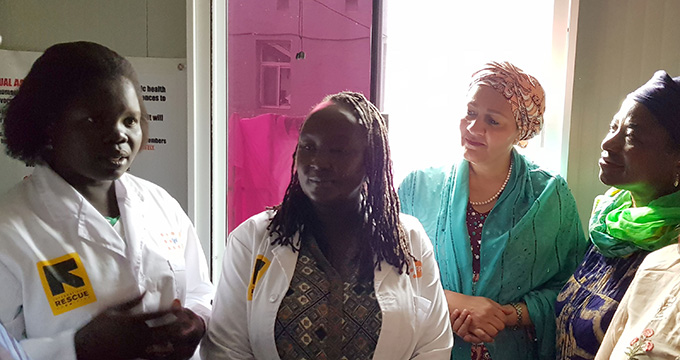