In one girl's stand against child marriage, a path forward for development

UNITED NATIONS, New York – “After I turned 16, my father wanted me to marry a 25-year-old man named Alhamza,” Nana, who is still 16 years old, told a room full of dignitaries and leaders at a high-level panel discussion on child marriage at the United Nations last week.

Child marriage is a human rights violation. The children involved – most often girls – are deprived of the right to choose when and whom to marry, one of the most fundamental and life-altering choices a person can make.

Yet it is all too common. In the Zinder Region of Niger, where Nana is from, about 70 per cent of girls aged 15 to 19 are already married.

The toll of this abuse resonates throughout a girl’s life. Many girls are forced to drop out of school when they marry, because they are expected to tend to their husband’s homes. In Zinder, 89 per cent of girls aged 15 to 19 are out of school. 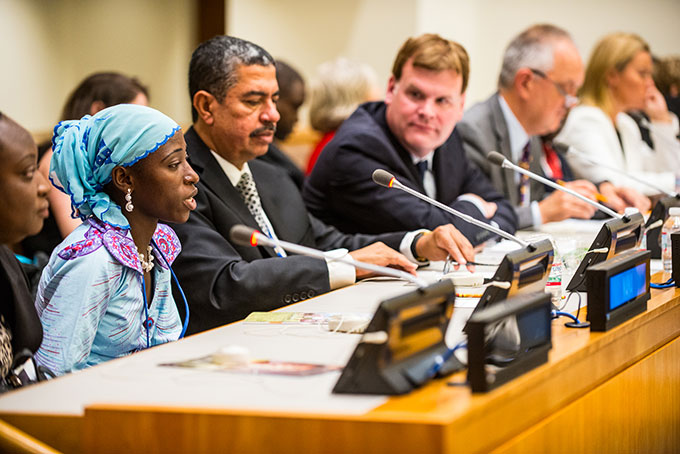 The prevalence of child marriage in Niger helps make the country’s maternal mortality rate one of the highest in the world, at 630 deaths per 100,000 live births.

Taking action for herself

Nana had seen this fate befall other girls in her area.

Yet in one key way, she was different: She had attended mentor-led educational sessions conducted by the Niger's Adolescent Initiative, a UNFPA-supported programme.

The initiative reaches adolescent girls in poor areas, and teaches them about their rights. The girls also receive lessons in reproductive health.

“In this programme, I learned that even at 16 my body is not matured yet,” Nana told officials at the UN. “I can get pregnant, and I can die during delivery or I can have an obstetrical fistula. I learned in that programme that a lot of young women and girls of my age died or had a fistula following a pregnancy.”

Armed with this knowledge, Nana made a choice: “In front of a delegation made up of 15 people – my parents and my neighbours – I said no to this marriage.”

Her courage was not without consequences. “My father chased me away from home,” she said. “I went to my uncle to seek refuge and I stayed there for one week.”

Still, she has remained steadfast in her decision. “I said no to this marriage because in the lessons that I had with the adolescent girls' programme, I learned that I have rights, and I have the right to say no to a marriage if I do not want it,” she said.

In making that one, critical choice, Nana has altered the landscape of her future. And if other girls are empowered to make this same transformative choice, together, they could change the whole country.

The ill effects of child marriage extend well beyond a single girl’s life. By depriving her of an education and by impairing her health, the practice harms her future children as well, making them less likely to be healthy and educated. The cumulative effects can hold back progress in whole communities, regions and economies.

“There is not a development goal that can be advanced as powerfully and productively whilst young girls are forced into early and forced marriage,” UNFPA Deputy Executive Director Kate Gilmore told attendees at the high-level event.

“And we know what to do to transform the situation… we understand deeply the ways in which education, both within school and outside of school, can empower [those] young girl[s],” she said.

Nana has come to this conclusion, as well. She says wants to continue her education and dedicate her life to helping other women and girls.

“With all that I learned in that programme about my rights, I would like to go back to school and keep studying so that one day I can be a midwife, to help and assist my sisters during delivery,” she said.