Thimphu, BHUTAN – "There was a time when I would be menstruating and didn’t know what to do during those days… Now I do.” These candid reflections came from an unexpected source: a nun sitting cross-legged on the floor of an astrology college in the capital of Bhutan.

She was part of a delegation of nuns and monks – known locally as Anims and Lopens Gelongs – meeting with UNFPA Executive Director Dr. Natalia Kanem to speak about their work destigmatizing sexual and reproductive health in their communities.

The Buddhist leaders spoke about the importance of these lessons, both for their communities and for themselves.

These messages are life-saving. “We feel like we understand complexities about our bodies, about other people,” said another. “I was able to speak to a fellow student who was troubled; I was able to stop him from killing himself.”

In Bhutan, as in many countries, young people face a variety of barriers to information about their bodies and reproductive health.

Adolescents and youth in the country face high rates of sexual activity, as well as high rates of unmet need for contraception. The number of adolescent births per 1,000 girls aged 15-19 is 28, and higher in rural areas. Child marriage rates are also high: 26 per cent of young women were married while still children, according to the most recent estimates.

Yet access to comprehensive sexuality education is low. Over 55 per cent of students are unaware of the risks of unprotected sex.

UNFPA first began working with religious leaders in Bhutan in 2011, starting with the Bhutan Nuns Foundation. Some 155 nuns from 26 nunneries received trained on life skills education, which provides the key information on reproductive health and human rights, including lessons on menstrual hygiene and the right to live free of domestic violence.

But shortly afterwards, a glaring gap emerged – most of the nunneries were headed by monks and other male religious leaders, who themselves often needed the same lessons. The next step was obvious: monks were soon included in life skills education as well.

Following a request from the Central Monastic Body in Bhutan, religious leaders began receiving training to deal with adolescent health issues, as well.

Today, UNFPA works with the local NGO Respect, Nurture, Educate and Empower Women (RENEW) to continue these important trainings. So far, UNFPA has worked with 45 heads of monastic institutions and 179 religious leaders across 20 districts.

Buddhism plays a large role in the communities in Bhutan. It is important, the religious leaders told UNFPA, to show that the faith is not at odds with sexual and reproductive health and information.

“Turning to spirituality comes from within. It’s not something I was pushed into. I chose to become a nun,” said Kinley Dem, a 28-year-old Anim. “But that does not mean I am any different from any other woman, you know.”

She says that life skills education has helped her become more confident when discussing sensitive topics. "I guess there was a time when I was shy. I didn’t know the answer to many questions and I felt awkward to ask. But not anymore.”

Lopen Phuntho Tobgay, 21, says he feels a great responsibility to serve the society that looks up to him.

“Things like sexual reproductive health rights and resisting gender-based violence is something that we need to talk about, which we weren’t doing earlier. Knowing and understanding myself and my body is the first step to dealing with social and cultural norms,” he said.

“The life skills education I got from UNFPA has helped me grow both inside and out.”

Dr. Kanem listened attentively to the monks’ and nuns’ insights. “I applaud you as religious leaders for boldly taking up the often sensitive issues of reproductive health and sexuality and for speaking so openly about them,” she said. “In many parts of the world, these remain taboo topics, shrouded in a conspiracy of silence.”

She added that faith leaders play a key role in advancing sexual and reproductive health and rights – a fact that will be highlighted at the Nairobi Summit in the second week of November, when faith leaders will come together with world leaders, grassroots advocates and everyone in between to address these critical issues.

Dr. Kanem also asked that the Anims and Lopens Gelongs help plot the future of sexual and reproductive health care and education in their country.

“I invite you to write the next chapter of life skills education,” she said.

The roomful of young Anims and Lopens nodded. They know they have their work cut out for them. 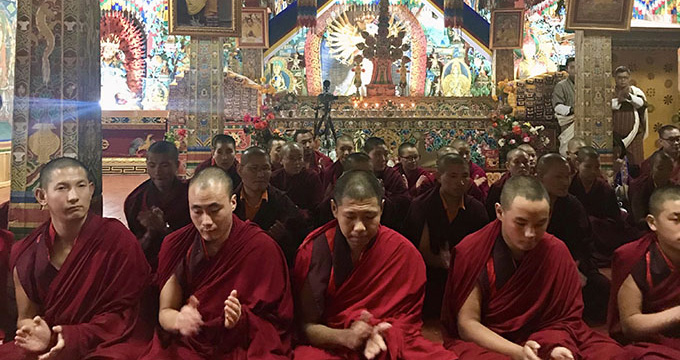