The findings, released last week, offer a stark view into women’s vulnerability to violence and discrimination, issues that are poorly understood – both in Sri Lanka and globally – because of underreporting and lack of data.

Despite the absence of formal data, these issues are all too familiar to women and girls, the survey confirms.

“I have witnessed, on multiple occasions, male passengers inappropriately touching and leaning on small girls,” said Varuni Manel*, a 23-year-old study participant. “Bus conductors also unnecessarily touch small children when getting on to the bus.”

The study also shines a light on the far-reaching effects this harassment has on the lives of women and girls, from their educations and livelihoods to their place of residence and personal relationships.

Initiated in 2015, the study included 2,500 individuals between the ages of 15 and 35. Information was gathered through interviews, questionnaires and focus groups. Every administrative district in all of Sri Lanka’s nine provinces was represented.

Women reported experiencing a wide range of mistreatment on public transport, including leering, verbal abuse and unwelcome advances, but the majority of harassment was physical.

Seventy-four per cent of women and girls reported they had been deliberately touched. Sixty per cent reported their personal space had been invaded, and 52 per cent said the offender’s genitals were rubbed against their bodies.

Ninety-seven per cent said the perpetrators were male.

Women in the survey described feeling humiliated and afraid. 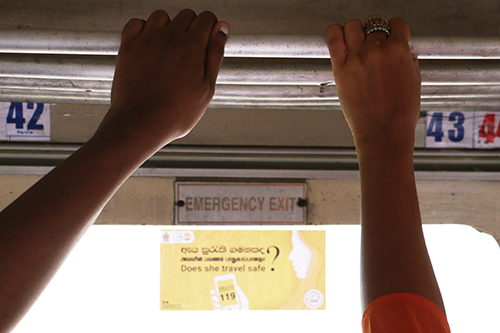 UNFPA and the government are raising awareness of a number women can call to report abuses. © UNFPA Sri Lanka

“Once when I was travelling by bus to go to class, a boy around 15 years old was sitting next to me. He ejaculated on my dress before getting off the bus,” said Rani Kumari*, 18. “There was nothing I could do. I felt helpless, and I didn’t speak to anyone about it.”

Women in Sri Lanka – especially low-income women – rely heavily on public transport. Half of female study participants said they use it to go to work, and 28 per cent said it was how they travelled to pursue their educations.

There is evidence that harassment and the threat of harassment are limiting women’s mobility, participation in public life and overall well-being.

A quarter of survey participants said harassment occurred monthly. About 12 per cent said it occurred daily. In some cases, women reported it was so frequent, and alternative modes of travel so scarce, that they moved residence to escape.

“As a nurse I have to work late nights,” Gayanthi Thilini*, 31, said in a focus group. “On one occasion, after leaving work exhausted, I got onto a bus and noticed a male passenger seated behind me. He was well-dressed and in his mid-40s. He started unnecessarily touching me, and as I objected, he told me that I should travel in a private vehicle.”

These abuses – and the culture of inequality they spring from – may be contributing to women’s economic marginalization. According to the Census on Population and Housing, labour force participation among women fell from over 39 per cent in 2006 to less than 35 per cent in 2014.

The study has started a conversation, not only on safety in public transport but also on the wider issues of violence, women’s rights and gender equality.

UNFPA is working with government officials, media and other key stakeholders to raise awareness of these matters, and to spread word about a hotline women can call to report abuses. UNFPA and partners are also working towards gathering more data on gender discrimination and violence, in order to inform policies that better uphold the rights of women.

"The study is important as it highlights the grave gender discriminations that persist towards women and girls,” said Sharika Cooray, a UNFPA gender analyst in Sri Lanka.

It is also “a first step in addressing the data gap at a national level on violence against women," she added.