AL-TABQA CITY, Syria – A new reproductive health clinic has been opened in the embattled northern Syrian city of Al-Tabqa, which has been the site of intense fighting over the past five years.

The second largest city in Raqqa Governorate, Al-Tabqa was retaken from the Islamic State of Iraq and the Levant (ISIL, also known as ISIS or Da’esh) seven months ago, and is now rapidly filling with displaced families.

Since May 2017, the population has grown by some 200 per cent, according to a joint UN assessment mission conducted there in December. There are now some 90,000 residents and 80,000 displaced people, many from Ar-Raqqa City and the countryside.

The health situation in Al-Tabqa remains precarious, but the new UNFPA-supported reproductive health clinic, opened on 7 January, is already meeting urgent needs among the population. 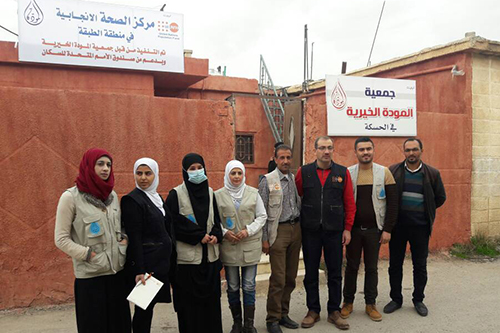 Despite challenges accessing Al-Tabqa, the clinic has been fully staffed and equipped. Image from UNFPA Syria and Al Mawadda

In the first two weeks of the clinic’s operation, “we have provided medical and reproductive health services in the clinic to 460 women,” said Dr. Adnan Al-Aqoub, who observed services at the clinic this weekend.

Basic, critical care is lacking, the December UN assessment found. Routine vaccination is unavailable, medicine prices are increasing, and there are shortages in drugs for diabetes, asthma and other conditions.

Lack of health facilities and qualified health workers has been a serious concern. The national hospital in the area is functional, but lacks essential equipment. Two private hospitals are also functional, but not sufficient to meet the needs of the city’s growing population.

Residents’ sexual and reproductive health needs have been seriously underserved for years. Contraceptives and reproductive pharmaceutical items have long been out of reach or under the control of ISIL, and therefore unavailable to governorate- and NGO-supported health facilities.

It is estimated that there are around 6,800 pregnant women in need of reproductive health services. Yet poverty and insecurity have worsened health-care access for many pregnant women, especially those from surrounding rural areas.

The new reproductive health clinic, opened by UNFPA and local partner Al Mawadda, with funding from the European Civil Protection and Humanitarian Aid, is already bringing relief to women.

On 16 January, 30-year-old Maysaa safely delivered twins – a boy and a girl – in the clinic.

“I am so blissful to have my new twins. They were in a very good health and they were provided with the essential medicines and medical services,” Maysaa said.

She received post-partum care, and neonatal care was provided to the infants, whom she named Zakaria and Hanan.

After she was discharged, a UNFPA-supported medical team provided follow-up care. 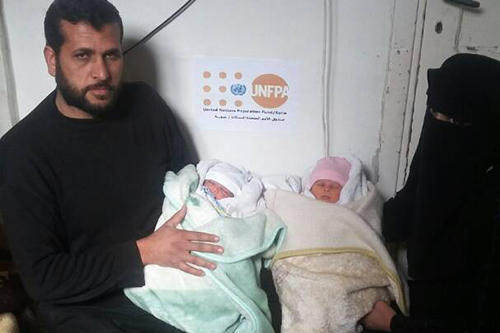 Maysaa with her husband and newborn twins. They have all been discharged, and a health team has visited the family to provide follow-up care. Image from UNFPA Syria and Al Mawadda

Communications have also recently been hampered by snowstorms.

Despite these challenges, the new clinic has been fully equipped and staffed.

“We are so thrilled to see all the needed services provided to very poor families from the area,” said Dr. Al-Aqoub.

But there is more work to be done.

The local health council has requested another mobile health team to provide additional services in the surrounding rural areas.

UNFPA’s presence and response has been enabled by the Emergency Fund, which provided the initial investment for establishing a field office.