SEPON HOSPITAL, Lao PDR — Twenty-five-year-old Xanya had twirled herself around her husband for comfort in the family tak-tak (an open-air cart attached to a motor by a long set of handlebars) along the 12 kilometres of rocky road from their home to the district hospital. He held her, hoping his body would absorb the continuous jolts. She had been in labour for more than ten hours.

Now Than, her husband, stood in the delivery room in his bare feet, handsomely sturdy but helpless as their second baby refused to drop down.

A Caesarean section seemed likely, an observing midwife whispered. At least the Sepon hospital was prepared for the lifesaving operation. A few years ago, that would not have been the case in Sepon,nor in many of the district hospitals throughout the Lao People's Democratic Republic. 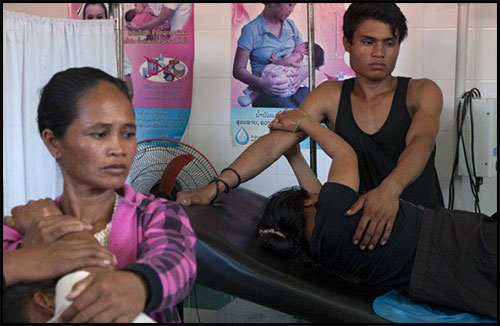 A pregnant woman in labour seeks assistance from her husband and relatives at Sepon District Hospital.

Xanya tossed about in her field clothes, as flies circled and the sounds of hammering and the sight of meandering cows came through the open windows. The nurse gave Xanya an injection in hopes of accelerating labour. A couple of more hours passed, and the attending medical officer, with six months training in obstetrics, took another look at her condition. The amniotic sac then ruptured.

Their fingers entwined, with Than occasionally blowing on her forehead, the young couple reflected the improving but complicated progress that Lao PDR has been making towards delivering babies safely and bringing down what was one of Asia's highest maternal death rates. One huge change is that the couple decided without hesitation to travel the distance to the district hospital in the southern province of Savannakhet, only 45 kilometres from the border with Vietnam. Both of their mothers, who are Mongkong (one among 49 ethnic groups in the country), gave birth, like so many Lao women, to their many children at home.

In 2011, only 58 per cent of births in the country benefitted from skilled birth attendance. Several factors account for this – lack of awareness about the importance of having assistance of a specially qualified health worker during childbirth, distrust in the competency of medical staff or facilities – where they exist, a preference for traditional healers, or an inability to pay for or reach services. But this has changed a lot since 2005, when only 18 per cent of births were attended by a skilled practitioner. According to the latest government data, about 38 per cent of births now take place at health facilities. 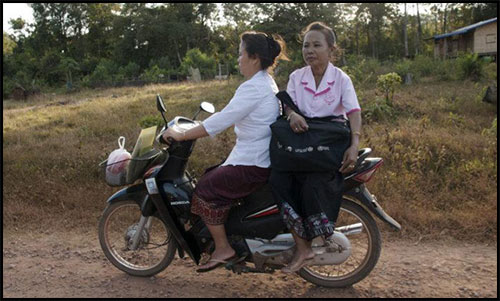 "I can't imagine," says Xanya's husband, Than, 24, his eyes shooting wide with fear when asked about giving birth at home. "It might be dangerous for her like this," he adds. The medical staff is beginning to fear his baby's umbilical cord could be wound around the neck.

Ethnic traditions and high fertility rate have made the country a risky place to give birth. Although the average fertility has dropped considerably since 2005 (from 4.6 to 2.5) many women in rural areas still endure many pregnancies. They do so early and in a short time span, which weakens their systems over time, explains Della Sherratt, international coordinator for skilled birth attendance with UNFPA in Vientiane. Many women, she adds, used to give birth alone in huts in the forest to avoid a bad spirit associated with blood that might create problems in childbirth.

Ancestor worship and the importance of family underlie Lao culture. "To be a good Laotian would be to have a good family and at least four children," says Sherratt. But the practice begins a bit too early. "There is very little option for girls, especially in rural areas where the majority of the population still lives, but to get married and have babies," she says. 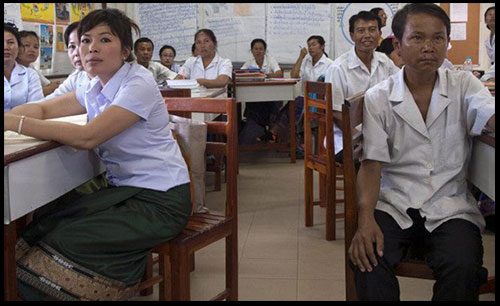 According to the 2012 Lao Social Indicator Survey findings, more than 22 per cent of women marry by age 19 and become pregnant soon after. The use of contraceptives is low, at 50 per cent, due to lack of awareness or limited access. The 2012 LSIS also found that fewer than half of young people had access to any sexual or reproductive health education.

Other threats to women's lives remain buried, but potentially lethal. The massive amount of unexploded ordnance from the 1970s war in Viet Nam have created greater challenges for the government to address women's health by impeding infrastructure development, such as roads and medical facilities.

Human resources needed shoring up as well. A 2008 assessment of health workers found that fewer than 20 per cent could perform four basic life-saving skills for women or newborns.

The government sprang into action following a 2005 survey which estimated a high rate of maternal mortality – 405 deaths of women per every 100,000 births. Although this marked an improvement from the previous figure of 650 deaths, it signaled that Lao PDR was off track for achieving the Millennium Development Goal on maternal health, which many consider to be the heart of the MDGs because of its impact on all the other goals. "I remember the health minister was so upset and insisted, 'We have to do something now!'" recalls Sherratt.

The government rallied development agencies and external funding to help expand the cadre of better trained health care specialists, access to medicines and adequate facilities, regulations and protocols. Giving birth in the forest was discouraged.

UNFPA responded by funding the re-training and deployment of community midwives and skilled attendants, including the recruitment and training of ethnic staff who understand the local languages. Now health centres that once handled six births a year are delivering at least that many each month. UNFPA offered new materials and new approaches to teaching to eight midwifery colleges, including hands-on practice requirements and accreditation for graduates that would increase their status. 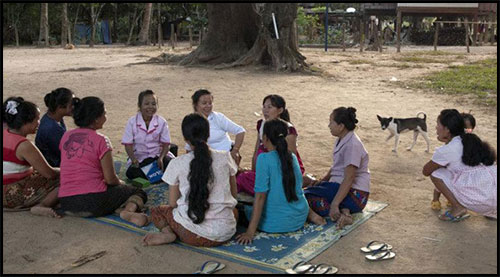 UNFPA encouraged outreach by midwives and other clinic staff to educate villagers on family planning, health care and healthy behaviours, such as nutrition during pregnancy, and the benefits of exclusive breastfeeding. Midwives now provide a selection of free contraceptives, vaccinations, antenatal and post-natal care and, if need be, assistance for childbirth at home. However, they do encourage women to give birth in a health facility, where referral to a higher level of care can take place more efficiently if complications arise.

In the Manju health centre, painted in cheerful tones of green and yellow and stocked with delivery kits provided with UNFPA support, midwife Bouavone Sinethphone, 40, talks about the "big difference" between now and 2008. "Before, the husband didn't touch the baby or even his pregnant wife," she says. "Now the husband brings his wife for antenatal care and for delivery." Making regular visits into communities has built the trust and ensuing traffic to her door.

Only a few months ago, no one gave birth in the health centre, says the nurse who has now received midwifery training. It's not surprising that women didn't feel comfortable coming there —the health centre had no equipment, no drugs, only a small basket of paracetamol, a mild analgesic.

Reaching out to adolescents and youth

In Vientiane, in collaboration with the Lao Youth Union and the Lao Women's Union, UNFPA reaches out to adolescents and youth with sexual and reproductive health education and counselling through a youth centre, a national hotline service, peer educators and a clinic that groups 12 hospitals and health centres into a referral and counselling network.

To help strengthen the policies that ensure the safe delivery of babies, including the desired spacing of children, UNFPA has helped the Lao government improve its data gathering through assessments, such as the situation of skilled birth attendants, institutional preparedness for providing emergency obstetric care and advocating for greater government planning, prioritizing and investment related to women's health.

Reflecting how times are changing, a district hospital asked for UNFPA assistance to set up a sexual and reproductive health counselling room. "A year or so ago they wouldn't even accept to talk about young people needing reproductive health service," says Sherratt.

Creating – and fulfilling – demands for services 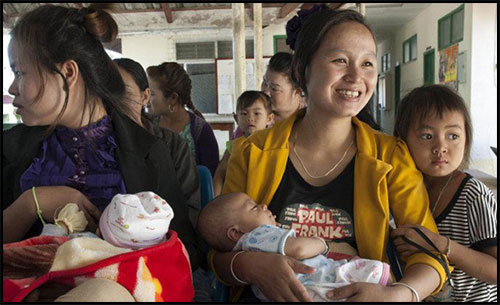 Creating demand for services and options is a third important focus for UNFPA's response in Lao PDR. This includes promoting the use of Village Health Committees, community-based distributors of family planning methods and scaling up participatory community assessments that help district authorities better provide a continuum of care.

"Access to information and quality services is an issue for communities and that is why we are focusing on it," says Esther Muia, UNFPA Representative in Lao PDR. "We use MDG 5 [improving maternal health] as our entry point because we know with it we can impact on progress on the other MDGs."Helping families reduce the number of pregnancies is proving to be equally important as providing access to safe childbirth."

"Contraception is saving women's lives," says Keng Ki village headman, Bounleu Saiyabong, 54, who regards it a duty to make sure all pregnant women in the village seek antenatal care and give birth in the Sepon district hospital (easily reached by river boat). He also says contraception, desired by most families in his village, is helping reduce poverty. "When there are so many children, it makes family life difficult. They can't earn so much, they can't feed the children and the mother can't rest." Smaller families, he says, means more children ultimately go to school and get a higher education.

The government, politicians and officials have made a similar connection. "I think if we can achieve MDG 5 we can increase GDP," says Phonethep Pholsena, a member of parliament and president of the Cultural and Social Affairs Committee of the Lao National Assembly. However, he is concerned that the recent increases in the Health Ministry's budget for maternal health aren't enough to generated enough improvement to reach the MDG goal of 185 maternal deaths per 100,000 births by 2015, compared to the current rate of 357/100,00 (LSIS 2012).

In Sepon district, where the government is providing free services and skilled care, the improvements are making a difference. Xanya and her husband are now home with their healthy boy, who was delivered safely without surgery.