MAPUTO, Mozambique/LUANDA, Angola – It can be challenging enough when a girl gets her first period – she may not even know what is happening to her body. Now put her in a situation in which she’s been displaced or vulnerable because of a natural disaster, conflict or pandemic and has no access to supplies or proper sanitation.

In the wake of back-to-back disasters – Cyclones Idai and Kenneth in 2019 and COVID-19 last year – adolescent girls in Mozambique have faced hampered supply chains and disrupted school-based reproductive health education, and they have seen sanitation resources diverted to fighting the pandemic.

Girls who have been displaced have to go further to find food, water and firewood in unfamiliar places, and many lack shelter, health care and privacy. If they know menstrual hygiene products exist, limited availability and cost keep them out of reach, and girls resort to cloths that are uncomfortable, irritate skin and take a long time to dry after washing.

In Sofala Province, thousands of girls remain in resettlement areas more than two years after the cyclones. But as part of this transition, UNFPA is supporting the government and partners to ensure their menstrual needs are considered a key part of the recovery.

Working with BeGirl, under the leadership of the Government of Mozambique and with funding support from the Government of Norway, and technical support from the Association for the Promotion and Development of Women and Plan International, UNFPA piloted a project that provided reusable menstrual underwear with washable absorbent insert to dozens of girls, and reached both boys and girls with information about the female reproductive system, menstruation, reproduction and family planning, helping to destigmatize menstruation within the community. The adolescents also received a period-tracking “clock”.

“I had a friend who missed school because of her period,” said one test participant. “If I saw her now, I would not let her miss school. I would tell her that it is normal to have a period and that she does not have to miss school because it is not an illness.”

Angola has also supported girls in humanitarian response – to the arrival of refugees from the Democratic Republic of the Congo in 2017 and internal displacement caused by severe drought in 2019. During the pandemic, vulnerable women and girls faced constraints in accessing affordable menstrual products. In this fragile context, UNFPA also partnered with BeGirl to address menstrual health and hygiene beyond the aftermath of a crisis toward a larger goal of advancing girls’ education and gender equity by not letting periods or unintended pregnancies keep them from school.

In Huíla province, women receive an average of only three years of school, according to surveys. Many girls living in rural and remote communities are unaware that menstrual hygiene products even exist. When girls begin menstruating, they often start skipping classes because of pain, lack of supplies, or stigma and shame. Repeat those absences with every cycle, and it’s not hard to see why they can fall further behind or drop out completely.

Lack of knowledge about reproduction often contributes to Angola’s teenage pregnancy rate that is among the highest in Africa: 163 births for 1,000 among girls 15 to 19. In Huíla, 36 per cent of girls 15 to 19 have already had their first pregnancy.  The programme offers an encouraging step forward: results showed that participants learned how the female reproductive system works and how menstruation and family planning are linked. Girls felt confident in participating in activities when they might have held back before, and boys felt more comfortable supporting friends, girlfriends and sisters in making informed health choices and in everyday participation.

In both countries, the programmes dispelled common myths. In Mozambique, for instance, there is the belief that one can’t add salt to their food or wash dishes while menstruating; in Angola, many believe one can’t bake a cake or that one can get pregnant from sitting next to a boy while on their period.

This year, UNFPA plans on scaling up the programme to include 4,000 adolescents in an additional three drought-affected provinces. Eventually, the goal is to reach 150,000 adolescents and youth by the end of next year. They are also working toward the elimination of taxes that make menstrual products hard to afford and even better, making period products free.

Menstrual health means being able to manage your body and period, not just during a one-time calamity or even on a monthly basis but long-term. As one Angola participant said, “I don’t think about having babies yet, but when the time comes, I already have the information.” 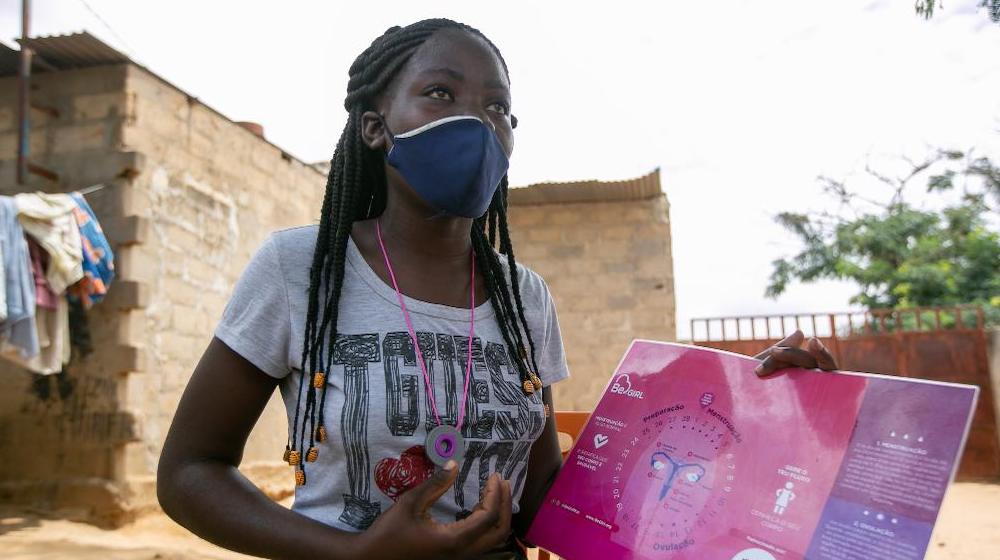 Women and girls with disabilities say WE DECIDE!