AWEIL, South Sudan – Arek Chuor, 32, expects to deliver her seventh child in September. It will be her last, she insists.

A childhood polio infection has left her with impaired mobility, including a permanent limp. The challenges are only growing as she works for a living and cares for her six children, she said.

Yet she remains apprehensive about family planning – largely because of contraception myths and misconceptions. Women in her community have told her, without evidence, that oral contraceptive pills will worsen her polio symptoms.

“I have never used family planning before, but I really don’t want to have any more babies after this pregnancy so I will just go ahead and listen to the midwife and set aside my fears,” Ms. Chuor explained after a recent prenatal appointment.

Refusing to be a statistic

Her disability is not the only reason behind her decision to explore family planning, Ms. Chuor said. Poverty is a big reason, as well.

Her husband is out of work, so it falls to Ms. Chuor to support the family by making grass mats to sell in the market. It takes three days to make the mats, which earn about 1,500 South Sudanese pounds (about $5) each. Of her six children, only two are in school.

Ms. Chuor grew up in poverty, as well. She had nine siblings, and was only able to reach the fourth grade before having to leave school.

Like many girls who are forced to drop out of school, she was unable to pursue her dreams. “I would have wanted to finish college and become a doctor, but we did not have money,” she recalled.

Instead, she was married while still a child; her first pregnancy took place when she was only 15.

Tragically, her situation is not unique.

The country’s net secondary school enrolment rate among girls is just 4 per cent. More than half of girls are married by age 18, and the country’s adolescent birth rate is among the highest in the world.

The maternal mortality rate, too, is one of the highest in the world, with 789 women dying per every 100,000 live births. Contributing to this stark figure is the fact that fewer than one fifth of women give birth under the care of a skilled health professional.

But on these counts, Ms. Chuor refuses to be another statistic.

She is determined to give birth at the Aweil State Hospital, instead of at home. She has been diligently visiting the hospital’s antenatal clinic for prenatal care.

And she will be a trailblazer on the issue of family planning, as well – only 7 per cent of married South Sudanese women use modern contraceptives.

The midwives at the Aweil State Hospital clinic will help her lead the way.

Midwife Sophie Effange says they give special care and attention to women with disabilities like Ms. Chuor. “We are conscious of their special needs so we prioritize them,” she explained.

She is also mindful of Ms. Chuor’s desire to try modern family planning methods. “When she comes back for a postnatal check-up, I will explain to her the various choices available for her and what suits her best, and then she can decide from there,” she said.

Ms. Effange is one of the many midwives deployed under UNFPA’s Strengthening Midwifery Services Project. Through this project, UNFPA has supporting the training of health professionals such as midwives and nurses throughout the country. South Sudan now has almost 900 trained midwives and nurses – up from fewer than 10 only eight years ago.

The initiative, which is funded by the governments of Canada and Sweden, also equips health facilities to improve access to reproductive health services. To date, the project has served close to 2 million women.

Ms. Chuor is comforted knowing that she will receive quality care when it is time to deliver. “The midwives take good care of me, and I am very confident that they are well-trained should any complication arise during my delivery,” she said.

She hopes the efforts to secure her health and safeguard her future may one day ease the path for her own children – particularly her daughters. “I want them to stay in school and not fall into the trap of child marriage like what happened to me,” Ms. Chuor says. 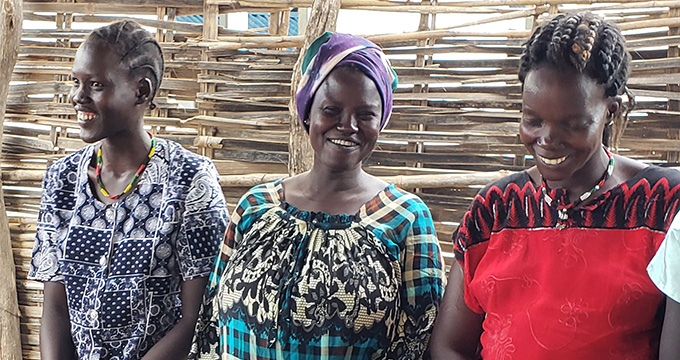