- My name is Ngo Quang Khai and I would like to interview you in order to get information for the 2009 Census.

- Please, come in and take a seat.

- Have you heard about the census?

- Your name is Truc Van Son?

- May I know, then, how many people are living in this household?”

But this was only the very beginning of a long interview to elicit detailed information from a statistically significant number of households in each district. It will take Khai, enumerator in Hung Yen Province, about 45 minutes to complete the long questionnaire, which includes 57 questions on population, mortality and housing. In 15 days, he is supposed to fill out 157 questionnaires, so there is no time to lose.

Many of the questions are very straightforward. But for people who live in large, fluid households, or who patch together livelihoods from a variety of sources, questions about household size and main source of income are difficult to answer simply.

Khai listens carefully to the head of the household while taking notes. He wants to be sure that no mistakes are made. The quality of the data is key in a process like this one, and Khai – very aware of that – makes sure that his attention doesn’t waiver. 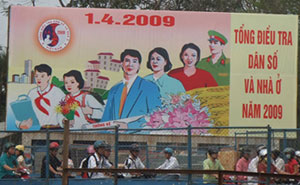 A public information and advocacy campaign reached out to the Vietnamese public to let them know that April 1, 2009 was Census Day. Photo credit: Nguyen Xuan Hong

Today is a special day. Khai is not alone, as he usually is. In fact, there are 10 other people in the same room monitoring the data collection. Khai´s supervisor, five United Nations staff and representatives from the General Statistics Office and People´s Committee observe his work.

Thirty United Nations staff from five agencies in Viet Nam joined the statistics office and other partners to help monitor the 2009 Population and Housing Census in 21 provinces throughout the country. This is the first time that United Nations agencies in Viet Nam have jointly monitored a census, and their work underscores the importance of quality data: “Supporting the 2009 Census is a key priority for the United Nations as it will provide the Government with the detailed information required to undertake more robust socio-economic development planning for the next 10 years,” says John Hendra, United Nations Resident Coordinator.

Le Thi Phuong Mai, who is monitoring for UNFPA, the United Nations Population Fund, has been involved in the preparation for the census and has taken part in several field visits, including the one to Hung Yen.

“We are happy with the data collection process, even if we have observed minor mistakes,” Phuong Mai said, pointing out the necessity of adhering strictly to procedures. “Sometimes the enumerator did not explain the purpose of the census enumeration to the household, assuming that the head of the household was already informed through mass media. There have been some cases in which enumerators did not review the questionnaire with the head of the household before they signed it,” she added. 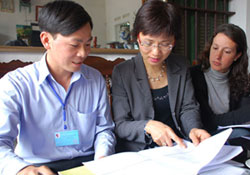 Everything according to the plan

Employing 250,000 enumerators, 42,000 supervisors and some 6,000 central, provincial and district staff, the census is an expensive project. The Government is shouldering the bulk of the $33 million cost, with UNFPA contributing $3 million.

The painstaking census preparation, including the publicity campaign, households listing and mapping, training and monitoring for enumerators and supervisors, and production and distribution of materials, has gone well, according to Rajen Kumar Sharma, UNICEF Programme Officer and Chief of the Provincial Child Friendly Programme.

“Local people seemed to be quite aware of the census from the activities undertaken at the local level by authorities through television, radio, village meetings and posters, among others,” he says.

And all the materials were in place for the census. “The questionnaires and the manuals for enumerators were in the right hands, at the right time and in the right quantities. We have not observed any shortages in materials,” UNFPA Representative Bruce Campbell explains.

Rigorous trainings and a hotline for enumerators and supervisors have worked out well, too, he adds, and double checking by supervisors has added another level of quality control. Trinh Phuong Lan is the supervisor in Cham Mat commune in Hoa Binh Province. “Every day, since the census started, I have checked the questionnaires filled out by the two enumerators under my supervision. Whenever I found errors in the forms I fixed them by going back to the household and asking the questions again to the head of the family,” she says.

“Enumerators seemed to have been well trained and they were using the interview guidelines quite strictly,” says his partner, Rajen Kumar Sharma. Depending on the type of questionnaire they were responsible for, all enumerators and supervisors attended 3, 4, 5 and even 8-day trainings.

UNFPA played a key role in designing the census questionnaires and in compiling the core manuals for census mapping, enumerators and trainers. It also participated in the pre-tests and the pilot survey and in testing data capture. The Fund also took an active role in organizing the trainings on mapping and household listing and the trainings for census organizers, supervisors and trainers nationwide. After the data collection, UNFPA will participate in the data analysis and dissemination. 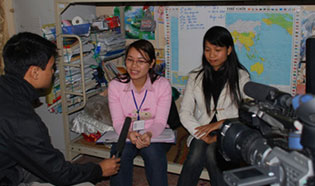 Facing a variety of challenges

Heavy rain on the first three days of April affected the progress of the census enumeration. In Hoa Binh, the enumerators, travelling on foot or on bikes or motorcycles, had difficulty accessing some of households in mountainous areas because of the rain and mud. Most of enumerators in the monitored provinces also noted the challenge of finding people.

“It is not easy to find people at home,” says Khai. “During working hours it is difficult to arrange interviews. I usually have to meet heads of households at noon and in the evenings. Very often, I have gone up to three or four times to the same household,” he adds.

Apart from this, he has found problems in answering questions 23 to 27, related to occupation. “People usually do different work at the same time, so they might have several forms of income. That is why they find it difficult to tell me about their main occupation,” Khai explains.

One other issue, raised by UNIFEM Country Manager Suzette Mitchell who participated in Bac Ninh and Bac Giang trips, was the large number of men as both enumerators and supervisors. According to her, the recruitment process should be reconsidered for the next census. The limited number of female enumerators means women miss this interesting opportunity to learn and gain a small income, she points out. Also, in some cases, it is more appropriate for women to be interviewing other women, for instance, single women or women in dormitories.

How the data will be used

Many units and branches within the finance, education, health, public security and construction sectors of Viet Nam will use the 2009 Census data to formulate their plans. The public security sector, for instance, needs the information provided by the census to know the exact number of usual residents at the commune level. The cultural and advocacy division is interested in having more information about religious affiliation. Five questions deal with education level and aspirations, which are important in planning schools. Finally, a number of questions about newborns and maternal health will help in the formulation of development plans; and they will help the country get a better estimate of maternal mortality (see below).

“The 2009 Census will provide us with the most robust data required for improving the evidence base for our policy, programming and prioritization of development assistance. This same data will also enable us to strengthen the ‘results-orientation’ of our combined efforts,” concludes Campbell.