In Mogadishu, Nothing Is Simple

MOGADISHU — Somalia Medina Hospital, one of Mogadishu’s two major hospitals, sits in a spacious compound in the western part of the capital. It focuses on trauma and emergency maternal medicine, treating several hundred war-wounded patients and expectant mothers every month.

In one hallway, a mother sits fanning her heavily bandaged son, 12-year-old Hassan Ali. Four months ago, they fled the drought in Baidoa and moved into the Dabke camp for internally displaced persons in Mogadishu. Hassan had been hit by a car bomb on his way to work as a shoeshiner.

At the other end of the hospital is the maternity ward, now undergoing expansions with support from the government of Qatar. Currently, 29 freshly painted rooms await beds, which have yet to be procured. 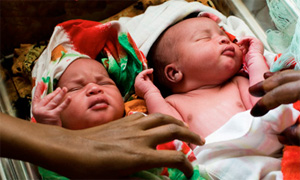 In the operating theatre, doctors induce labour on Berlin Mohamed. At seven months pregnant, she is suffering from ante-partum haemorrhage. The premature baby dies — there are no neonatal facilities at Medina.

“Lack of equipment is endemic in this area of the country, there is nothing,” said Dr. Mohamed Yusuf, director of the hospital.

The emergency procedure does, however, save Berlin’s life. As required in Somali custom, the doctors are grateful the men in Berlin’s family gave consent for the induction of labour.

Dr. Nimo Abdi Hasan, who has lost several patients because the husband or the father refused to consent to recommend emergency procedures, explained that the men will say, “She will deliver by the will of God, so let’s just wait.” Sometimes, they refuse a woman having a Caesarean section.

In Somali culture, the husband or father is responsible for the woman, and the law requires his approval in all health care decisions. In urgent cases, doctors and nurses find themselves having to convince not only the patient but also family members on the best course of treatment.

Hesitation or refusal to consent to the doctor’s recommendation is common. Families may 'shop around' for alternate opinions, believing the doctor is suggesting an expensive treatment rather than the necessary treatment. Other times, a woman will arrive without a man to provide consent. The time spent locating an accountable male can prove fatal.

In Somalia, it is critically important to work with local partners. For one, it is a matter of access. In the areas of the country controlled by Al Shabaab, the Islamist militants opposed to Western intervention, few organizations are allowed to operate. In late November, 16 organizations, including UNICEF, WHO and UNCHR, were banned by Al Shabaab.

Gaining access to vulnerable populations is one of several reasons to encourage local partnerships. Another is the need for cultural and religious fluency. As described in the hospital, the Somali tradition of having a male’s consent for dependent females demands culturally sensitive approaches to delivering health care.

UNFPA’s partners in Somalia possess a deep understanding of the country’s culture, family affairs and decision-making processes. In an entirely Muslim society, the rules of Islam govern behaviour, calling for collaboration with faith-based organizations. One such partner, Islamic Relief, has had a long and trusted presence in the country and now operates in several camps for internally displaced persons throughout Mogadishu.

Although 20 years of conflict have made data collection impossible, it is believed that women in Somalia face the most dismal health statistics in the world. The need for health-care interventions sensitive to the customs of Somali society is now greater than ever.

In Mogadishu, Nothing Is Simple