Midwives in South Sudan Heed Call to Save Mothers

JUBA, South Sudan – Armed with a broad smile, Jennifer Ikokole ushers expectant mothers into a makeshift tent at the sprawling Tomping civilian protection camp in South Sudan’s capital, Juba. As the current crisis takes its toll on the population, the tent serves both as a maternity ward and a maternal and child health clinic.

Ms. Ikokole, 49, started working as a midwife 24 years ago in her native country of Uganda. When she joined UNFPA’s midwifery programme in South Sudan two years ago, she knew her work was cut out for her.

South Sudan, the world’s youngest country, has one of the highest maternal death rates in the world, according to a 2006 household survey. Health facilities are poorly equipped and understaffed, making the country ground zero in the battle against maternal mortality.

Today, Ms. Ikokole and her fellow midwives are working under even harsher conditions, in the midst of a humanitarian emergency that has gripped the country since violence broke out between government and opposition forces four months ago.

Based on targets by the health sector, as part of the South Sudan Crisis Response Plan, it is estimated that 2 million people inside the country have been affected by the crisis, including nearly 68,000 who are sheltering in eight civilian protection camps set up inside UN peacekeeping bases. Among them are 500,000 women and girls of childbearing age and 80,000 pregnant women. 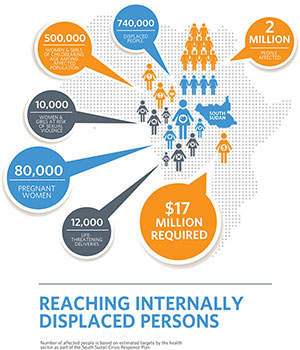 © UNFPA “Nobody said it would be easy”

It has not been easy, says Ms. Ikokole, but nothing could stop her from working to save the lives of the mothers and children in her care.

“This is where I work, and I like the work that I’m doing,” she says. “When I was told to come and work at the displacement camp, nobody said it would be easy. The conditions are not good, but helping mothers is a calling I must heed, and I get satisfaction from that. It is good to know I’m saving lives by helping mothers deliver safely.”

The conflict has taken an enormous toll on women and girls.

“Some of the mothers who come here [to the clinic] are very stressed both by their pregnancies and the loss of their husbands as a result of the conflict,” she explains. “Some of them have also suffered sexual violence.”

Midwives are the first contact many expectant mothers have with health personnel, bringing hope to women who have no access to doctors or clinics – especially during the current humanitarian crisis.

When delivery complications occur, trained health personnel are crucial to saving the lives of women and their babies. But many South Sudanese mothers give birth at home, often without trained midwives. Inside the protection camp, UNFPA’s midwives rely on volunteer traditional birth attendants to sensitize mothers on the services available at the camp’s makeshift maternity tent.

“The traditional birth attendants play a critical role because they let the mothers know about the services here and convince them to come,” says Ms. Ikokole.

Ms. Ikokole’s experience mirrors that of 29 other international midwives deployed by UNFPA across South Sudan’s 10 states, where, together with their partner International Medical Corps, they deliver clean delivery and dignity kits and comprehensive emergency obstetric care.

The UNFPA clinic in the Tomping camp receives an estimated 30 pregnant women every day.