COX’S BAZAR, Bangladesh/VANCOUVER, Canada – Salma cradled her newborn daughter in the shade, seeking relief from the heat of her tarpaulin shack in the crowded refugee camp where they live. Her older daughter and a few neighbours joined her, smiling at the baby. She is “a special child,” they say.

Salma is Rohingya and, like hundreds of thousands of others, she fled to Cox’s Bazar, in Bangladesh, following violence in her home community in Myanmar.

When Salma was a few months pregnant, she was approached by a community health worker, who learned that Salma had experienced nine miscarriages – eight back in Myanmar and one after arriving in Bangladesh.

The health worker urged her to visit a UNFPA-supported health facility, staffed by midwives.

“I remember when she came, with an adopted girl who followed her everywhere,” the midwife supervisor recalled. “We sent her to the town for tests, and that was how we discovered she had diabetes.”

Salma’s diabetes and history of miscarriage meant her pregnancy was considered high risk. She was urged to receive regular prenatal services for careful monitoring.

Under the guidance of her midwife, Salma diligently received check-ups every two weeks. When her labour pains started, she walked to the clinic by herself. With the care of midwife Imama, she delivered a healthy daughter.

A call to action

Every pregnant woman deserves a safe delivery – even if she is living through a humanitarian crisis. Midwives can provide this care, saving lives in the process.

Yet around the world, 830 women die every day of preventable pregnancy-related causes. This is one women every two minutes.

Investment into the education, regulation and support of midwives could eliminate the vast majority of these needless deaths, experts said at the Fourth Global Midwifery Symposium in Vancouver, Canada, on Sunday.

When educated to international standards, midwives could avert over 80 per cent of all maternal deaths, stillbirths and newborn deaths, according to a 2014 study.

“Midwifery is a game changer for ending preventable maternal deaths,” said Arthur Erken of UNFPA at the event, which was organized by UNFPA, International Confederation of Midwives and the World Health Organization, in collaboration with Jhpiego, UNICEF, Laerdal and the Canadian Association of Midwives

Participants also issued a call to action at the symposium, which was held on the sidelines of the Women Deliver conference.

“Every midwife must have the opportunity to work in an enabling environment,” the call to action states.

This environment includes: the ability to practice to one’s full scope of practice; the ability to make and be accountable for independent decisions within the regulated scope of practice; a functional health infrastructure with adequate human resources, support, equipment and supplies; access to timely and respectful consultation, collaboration and referral; safety from physical and emotional harm; and equitable compensation.

What the world needs

In Bangladesh, as Salma rested outside with her family, midwife Imama arrived for a house call.

Salma greeted her warmly. She and her family credit Imama – and the other midwives and health workers – for her baby’s safe delivery.

All women deserve to have the same comfort, care and confidence in their health providers.

“Invest in midwives and support them in doing their job,” said Anneka Knutsson, a UNFPA sexual and reproductive health expert, at the event in Vancouver. “It is what women want, and it is what the world needs.” 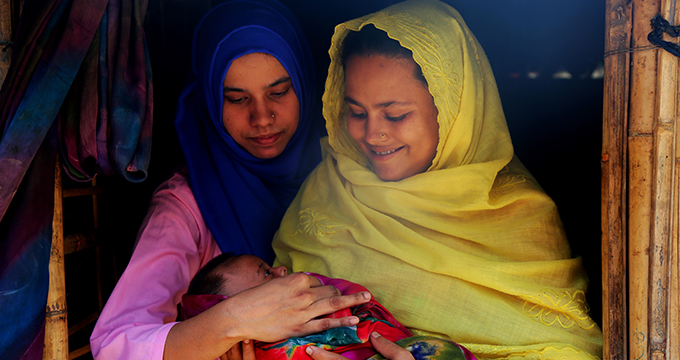