KARAMOJA, Uganda – A funeral changed Carolyn Akello’s life forever. “A young woman had died while giving birth at home,” she explained. “’If this mother had delivered in the presence of a midwife, she wouldn’t have died because the cause was preventable,’” I heard some of the mourners say… I immediately made up my mind. I told my parents that I wanted to become a midwife.”

Ms. Akello began working as a midwife almost one year ago, after attending the Lubaga School of Midwifery with financial support from UNFPA.

“I have never registered any maternal death out of the over 200 deliveries I have performed,” she said. 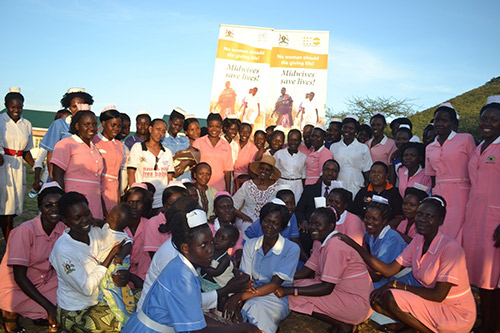 Some 180 UNFPA-supported midwives gather in Napak District. At the event, 90 midwives pledged to work in underserved areas of Uganda. © UNFPA/Evelyn Kiapi

“Today, I am living my dream,” she added.

People like Ms. Joyce are urgently needed throughout Uganda. There, only 58 per cent of births are attended by a professionals with midwifery skills, according to a 2011 survey. Midwives are also needed to provide a variety of other services, including antenatal care, post-partum check-ups and family planning counselling. Over 70 per cent of Uganda’s need for midwifery care is unmet, according to the 2014 State of the World’s Midwifery report.

“A mother’s death during pregnancy and childbirth is not only a health issue. It is also a social calamity,” said first lady Janet Kataaha Museveni, at an event in Napak District commemorating a pledge by 90 midwives to work in Uganda’s underserved regions. Ms. Akello and many other midwives shared their experiences at the gathering.

An estimated 5,700 Ugandan women die each year of pregnancy- or childbirth-related causes, according to the most recent UN statistics. These deaths “can be prevented with proper midwifery care,” Minister of Health Elioda Tumwesigye said at the event, which was attended by 180 UNFPA-supported midwives.

“We cannot sit back and watch as our mothers die during preventable causes,” Dr. Tumwesigye added.

Inspired to save lives

Ilukori Joyce knows all too well that childbirth can end in tragedy. Years ago, she witnessed her cousin’s stillbirth.

“She was in a lot of pain, but she stopped me from calling for help because of the belief that men should not be involved in times of delivery,” she told the midwives in attendance. “After a long struggle, the baby’s legs came out, but at this point, my [cousin] was too weak to push further.”

Their grandfather, defying tradition, rushed to assist with the delivery. “He managed to remove the baby,” Ms. Joyce recalled, “but it was long dead.” 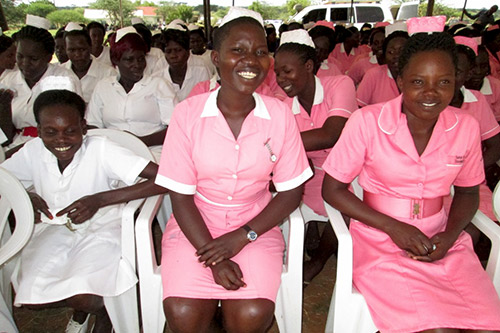 Ms. Joyce was inspired to become a midwife, and she has since handled over 100 deliveries. After one particularly harrowing delivery, she said, “the mother was so delighted that she named her child after me – Ilukori Joyce – even when she knew it was a boy.”

Additionally, since 2010, UNFPA and the Government of Sweden have supported a fund for midwifery training, specifically for underserved areas in Karamoja. So far, over 450 midwives have been trained through this programme.

Some, like Catherine Agibo, have become leaders in their profession. Today, Ms. Agibo is a midwife at the Katakwi General Hospital in Northeastern Uganda. She is also in charge of continuing medical education at her hospital, and she is a ‘regional mentor’ on maternal nutrition.

Ms. Agibo also attended the ceremony in Napak. “It is a joy,” she told the crowd, “to be a midwife.” 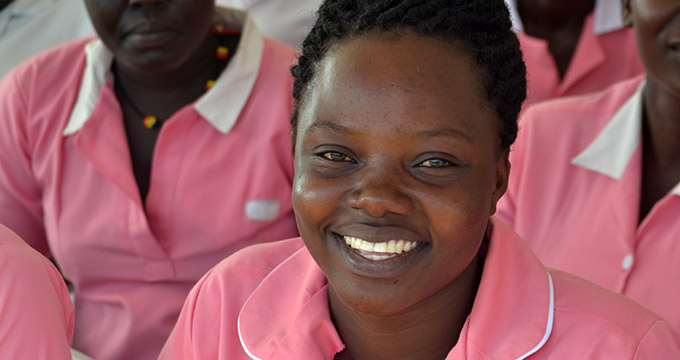