PORT-AU-PRINCE — The January 12 earthquake in Haiti didn’t stop at taking lives and crippling people. It also wreaked havoc on the very foundations of the country’s institutions, such as government ministries, hospitals and schools. It has halted, for the time being, the training of much-needed midwives.

Quettely Chevalier, a teacher at Haiti’s only midwifery school, was giving a lecture on obstetric care at the nearby Lumiere University when the earthquake hit. As the rumbling of the quake started, many students panicked and ran for the exit. Chevalier, too, made for the door and escaped unharmed.

The neighbouring nursing school—one of three official nursing schools in the country—was reduced to rubble killing 150 students. When the dust settled, lockers containing hospital gowns peeked through gaping holes in the structure, and the school’s bus was crushed by falling bricks as the walls caved in.

The midwifery school was left standing, but is likely to have structural damage too serious for future use.

At a time when many Haitian health workers have either been killed or are seriously injured and in need of medical care, the recruitment of a new generation of nurses and midwives is all the more urgent. 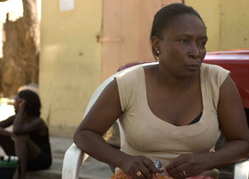 Quettely Chevalier, a teacher at Haiti's only midwifery school, said no one knows the whereabouts of most of the schools students and faculty. Photo: Carina Wint

Whereabouts of teachers and students unknown

The midwifery school had 78 students and turned out about 35 midwives each year—an important and much-needed contribution towards reducing the country’s maternal mortality rate. At 670 deaths per 100,000 live births, it is the highest in the Western hemisphere and one of the highest in the world.

Classes at the midwifery school ended at four o’clock on the day of the earthquake, less than an hour before the disaster struck. By then, students and teachers had scattered, and no one knows where they all are or how they fared. Many of the students had internships at hospitals, and could have lost their lives or been injured there or at the university, where some of them studied.

“We know the director of the school is alive, but we have not been able to communicate with her,” said Chevalier.

Devastation hits all levels of health and women’s affairs

All levels of the health and women’s affairs sectors have been seriously affected. “We lost 90 per cent of our partners in the Ministry of Women’s Affairs when its building collapsed,” said Tania Patriota, UNFPA Representative for Haiti.

It is still too early to start reconstruction efforts. Earthquake victims are still receiving emergency care in and around hospitals and makeshift clinics, rubble is blocking streets and homeless people are sleeping on streets, sidewalks and in parks. The smell of decaying bodies is lingering in the air. However, before too long, Haiti will have to start its long road towards recovery.

“If there is work, I will be there right away,” said Chevalier.